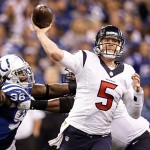 Opening Line: Colts -6 Over/Under: 47 Time: 1 PM EST Sunday December 11, 2016 on CBS Houston Texans (6-6) vs. Indianapolis Colts (6-6) To say there is a logjam in the AFC South would be a major understatement, as the Texans, Colts, and Tennessee Titans are all tied atop the division at 6-6. The Colts may be the hottest team of that bunch winning three of their last four games. Andrew … END_OF_DOCUMENT_TOKEN_TO_BE_REPLACED 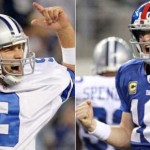 Opening Line: Cowboys -3 Over/Under: 47.5 Time: 8:30 PM EST Sunday December 11, 2016 on NBC Dallas Cowboys (11-1) vs. New York Giants (8-4) The 11-1 Cowboys became the first team to qualify for the playoffs and they can wrap up the NFC East with a win in this game. They have reeled off 11 straight wins since losing their first game of the season at home to the Giants. Dak Prescott … END_OF_DOCUMENT_TOKEN_TO_BE_REPLACED