Mariners face baseball's most grueling travel schedule The Seattle Mariners biggest disadvantage won't come on the field this season. As is frequently the case, it will come at about 35,000 feet in the air, as they are once again faced with baseball's most grueling travel schedule. According to Baseball Savant, the Mariners are currently scheduled to travel 43,281 miles during the 2015 … END_OF_DOCUMENT_TOKEN_TO_BE_REPLACED

James Shields introduced by Padres, receives royal welcome Your browser does not support iframes. If James Shields wasn't feeling at home already after signing a four-year, $75 million contract with the San Diego Padres — which we've now learned includes a fifth year option worth $16 million — he certainly was after arriving at Petco Park on Wednesday. Prior to his introductory press … END_OF_DOCUMENT_TOKEN_TO_BE_REPLACED

Double-A team to host 'Brian Williams' Pants On Fire Night' If there's a major story or scandal in the news, we can always count on at least one minor baseball team turning it into a wacky promotion. The Akron Rubber Ducks — the Double-A affiliate of the Cleveland Indians — are the latest team to employ this strategy and strike while the iron is hot, announcing "Brian Williams' Pants-on-Fire … END_OF_DOCUMENT_TOKEN_TO_BE_REPLACED 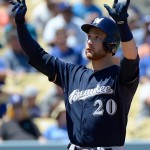 Brewers get bad news: Jonathan Lucroy will miss 4-6 weeks Milwaukee Brewers catcher Jonathan Lucroy, fresh off a 2014 breakout season in which he finished fourth in NL MVP voting, is already off to a bad start in 2015. Lucroy will miss 4-6 weeks because of a "mild" right hamstring strain. He'll miss a chunk spring training, but the Brewers are hopeful he'll be ready for opening day. Lucroy … END_OF_DOCUMENT_TOKEN_TO_BE_REPLACED

Saves and Steals: Bullpen Review: AL East Last week, we embarked upon the latest Saves and Steals epic journey – a top to bottom analysis of every major league bullpen. We began with the NL East. Today we'll shift leagues to cover the AL East. Over a six week period, we'll cover every major league bullpen by division. It's not a simple job. Any number of potential relievers could emerge during … END_OF_DOCUMENT_TOKEN_TO_BE_REPLACED

88-year-old attempts to charge the mound at Rockies fantasy camp Don't pitch up an in on an 88-year-old man. He might just charge the mound. That's how Lew Dunlap reacted after ducking a pitch near his chin at a Colorado Rockies Fantasy Camp in Arizona. The camp is an annual event that lets fan live out their dreams of playing in the pros. Your browser does not support iframes. Dunlap paid … END_OF_DOCUMENT_TOKEN_TO_BE_REPLACED 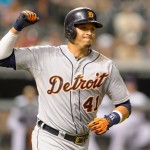 Tigers get good news on Victor Martinez's health The Detroit Tigers couldn't have asked for a better prognosis following Victor Martinez's left knee surgery. Martinez went under the knife to repair a torn meniscus on Tuesday and the timeline for his return is four to six weeks, which is on the quick side of the expected recovery times for the procedure he underwent. The 36-year-old … END_OF_DOCUMENT_TOKEN_TO_BE_REPLACED