You are here: Home / Basketball / Sixers take Duke’s Jahlil Okafor at No. 3, add to glut of high-potential big men 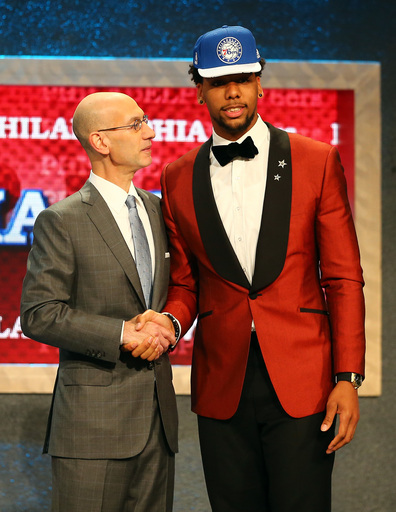 Let no one say that Philadelphia 76ers general manager Sam Hinkie is not committed to taking the best player available. After taking the rapidly developing Nerlens Noel and still-unavailable Joel Embiid in successive drafts, the Sixers selected Duke center Jahlil Okafor with the third-overall pick in Thursday’s 2015 draft at Barclays Center in Brooklyn. The three players with the highest potential on the roster now all appear to occupy the same position, and Hinkie and head coach Brett Brown now have some work to do to make them fit together.

That’s not to say that it wasn’t sensible for the Sixers to take Okafor. The 19-year-old Chicago native is one of the most impressive post scorers in years, a beast on the block who helped lead the Blue Devils to the national championship last spring. Many analysts considered Okafor the best prospect in the draft prior to the emergence of eventual top pick Karl-Anthony Towns, and he was expected to fall no lower than second before the Los Angeles Lakers warmed to Ohio State guard D’Angelo Russell within the past week. Irrespective of any other context, Okafor is a great value at the third pick. As reported by Yahoo’s own Adrian Wojnarowski, they intend to keep him. And it’s not as if Embiid feels like his job is now in jeopardy:

Aye my boy is in philly with me #AfricanConnection

Yet context matters, and it’s difficult to assess the Sixers roster without noticing that they are hoarding big men at a time when the rest of the league is gravitating towards smaller lineups. Brown has installed a system based around three-point shooting and defense, but the team as constructed appears better suited to feed the post. While it’s clear that the Sixers have selected the three most talented players with each of their top picks in each of the last three years, the roster looks too imbalanced to exist in this form for too long.

Perhaps that’s the point. Sixers ownership has given Hinkie plenty of leeway to let the team develop slowly, and such an outlook allows him to play around with the roster and embrace high-risk draft picks. Both Noel and Embiid did not play a single game in their first professional seasons, a much-mocked fact that still ended up with the Sixers grabbing two players who likely would have gone first-overall if they were fully healthy. While Embiid still has yet to take the court (and might not for some time) Noel had a very successful rookie season and looks set to develop into a defensive anchor. In fact, he could make a terrific pairing with Okafor, a terrific scorer who lacks elite defensive talent and skills.

There’s no guarantee that Hinkie’s approach to always select the best-available player will yield excellent results (or even a single All-Star), but it makes slightly more sense if you consider that any rebuilding process is fraught with potential pitfalls and disasters. Many teams plan for the future before players develop fully, to the point where they project players as potential stars who never really turn into anything more than quality role players, if even that. If nothing else, Hinkie has maximized the chance that Philadelphia will end up with a top-quality big man. It’s a basketball version of risk management, albeit in service of a plan that could end years from now with everyone wondering why they were ever willing to be so patient.