You are here: Home / Hockey / Blackhawks ‘got black people lovin’ hockey’ and apparently everyone else in Chicago

Fan-on-the-street interviews after major championship victories usually mean hundreds of screaming idiots trying to distract a poor reporter as he or she attempts to set the scene in the middle of a drunk tank.

So this WGN reporter was lucky in the sense that he was getting one-on-one chats with Chicago Blackhawks fans after Game 6 on Monday night, and even luckier that the fan he found gave him an answer that quickly went viral:

“You know how awesome the Hawks are? It sounds messed up but it’s true: They got black people lovin’ hockey. Ain’t that something?”

And the LOLZ echoed through the Chicago skyline.

That’s a superb line, fueled by decades – hell, a century – of the perceived demographics of the NHL’s player and fan bases. (And hockey fans’ problematic relationship with black players.)

But this isn’t another screed about how the player demographics are changing, or how the overall African-American audience for hockey is inching larger, according to the Chicago Tribune:

African-American fans have the highest growth rate among NHL fans at 1.4 times the overall rate, according to Scarborough, a national media research company.

No … this is a Chicago hockey story.

In Chicago, the number of African-Americans who identify themselves as very or somewhat interested in the Hawks increased from 12.6 percent in 2011 to 21.9 percent in 2014.

The number of black fans who watched a Hawks game on TV or listened on the radio grew from 28.1 percent in 2011 to 37.9 percent last year. They made up 9.7 percent of Hawks fans in 2014, up from 7.1 percent in 2011, which is the only increase among racial groups charted by Scarborough.

When I saw the video above, I laughed. We all did. I watched it on my phone as I was leaving the Windy City on Tuesday, a day when literally every corner of Chicagoland had something Hawks related in my peripheral vision.

The mailman wearing the Duncan Keith jersey. The buses with the “GO HAWKS” digital signs. The window at the free clinic with the unintentionally hilarious “DID YOU GET YOUR SHINGLES SHOT” right next to a Blackhawks logo. The hats that sporting goods stores couldn’t keep in stock. The ticket agent at the airport wearing the Jonathan Toews jersey. The fact that every news station in the area was leading with Cup celebration news.

And the night before, hours after Game 6, walking around downtown to the still-open bars with my hockey scribe brethren and seeing every demographic barrier that divides the city smashed like it just took a Marian Hossa slapshot. 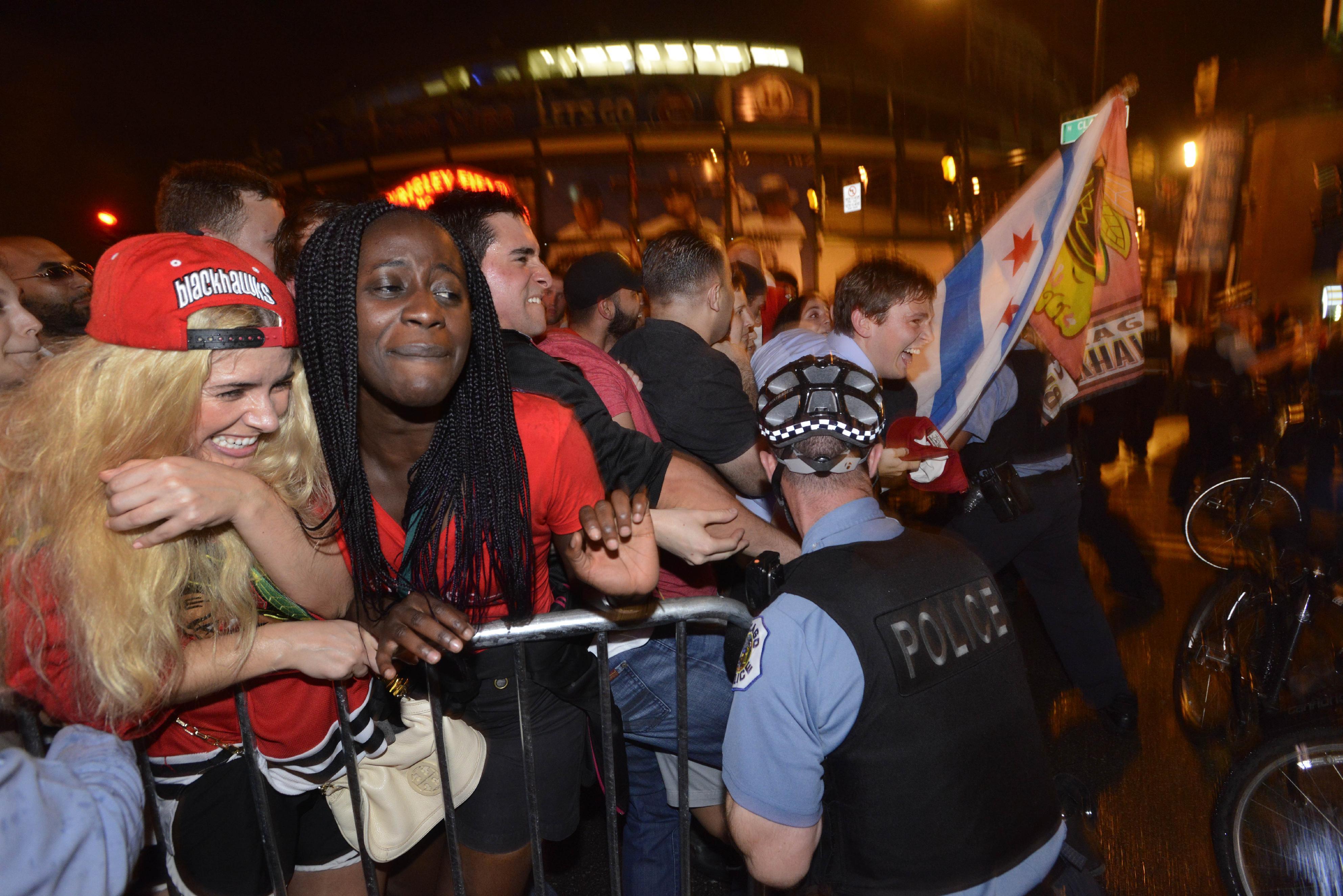 Everyone in Chicago was a Blackhawks fan. The bandwagon doesn’t segregate or discriminate. Not at this point in the season. If you’re taking oxygen in Chicago, chances are you were also expelling breath cheering for the team.

And that’s a Chicago sports thing. I’m from Jersey, and hence in the New York sports market. We’re never getting behind a single team in the way Chicago backed the Hawks. Devils fans and Rangers fans wouldn’t rally for the Islanders. The Mets fans hate the Yankees. Giants fans might work up apathy at best for a Jets Super Bowl. Knicks fans aren’t rooting for Brooklyn unless it’s a protest vote to their own team’s haplessness.

The point is that New York is in a constant state of “Cubs vs. White Sox” while Chicago can feel like Americans in an Olympic year when the Blackhawks or the Bears are challenging for a title.

I’m jealous of this. Jealous of how Chicago came together for this team, like three million people were attending a high-school pep rally for the last two weeks. And while “they got black people lovin’ hockey” was the most hilarious indication of it, that raucous, rabid support brought the city together in a way I’ve rarely seen for a championship team.

Sports, at their best. do this better than anything else in popular culture: Make us feel part of something that brings us all together for a common cause. Makes us wear the same colors, sing the same songs, never care about where the person next to us is from or what they look like. And that’s what I felt in Chicago this week.