Marian Hossa scores controversial dagger of a goal in Game 7 (Video) Marian Hossa of the Chicago Blackhawks scored a critical goal in Game 7 of the Western Conference Final in the second period on a play that the NHL determined was not a kicked puck into the goal. After Brad Richards’ shot was saved by Anaheim Ducks goalie Freddie Anderson – who then left yet another rebound in front of him … END_OF_DOCUMENT_TOKEN_TO_BE_REPLACED 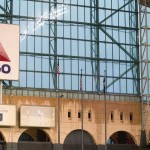 Minute Maid Park concourse was temporarily flooded on Saturday The city of Houston and much of southeast Texas has been inundated with severe weather and heavy rains this week, leading to flooding conditions and the entire area being declared a disaster by President Obama. Unfortunately, they didn't get any relief on Saturday as a new line of powerful thunderstorms hit the area, leading to … END_OF_DOCUMENT_TOKEN_TO_BE_REPLACED 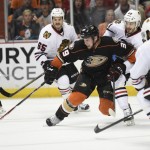 Daily Picks: Another road Game 7 winner? Welcome to the Stanley Cup Playoffs Daily Picks, where CBS hockey writers Chris Peters and Adam Gretz get you ready for every game every day of the postseason and share their predictions for each. Chicago Blackhawks at Anaheim Ducks, 8 p.m. ET, NBC, Game 7 Series tied 3-3 For a series that has been remarkably close through six games, it's hardly a surprise … END_OF_DOCUMENT_TOKEN_TO_BE_REPLACED

Munoz wins rain-shortened IndyCar race in Detroit (The Associated Press) Carlos Munoz has his first career IndyCar victory, winning Saturday at Belle Isle when the race was called because of rain after 47 laps. The 23-year-old Colombian driver had a substantial lead when a caution flag came out with just over 30 minutes remaining in what was supposed to be a 2-hour race. Marco Andretti was … END_OF_DOCUMENT_TOKEN_TO_BE_REPLACED 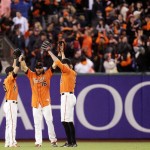 Live updates: Best of Saturday's MLB action Thanks to their fifth straight win Friday night (SF 4, ATL 2), the Giants come into Saturday sitting in first place in the NL West. They've won 13 of their last 15 games overall and are a half-game up on the Dodgers. San Francisco was 5.5 games back at the start of this 13-2 stretch. The recent hot streak coincides almost perfectly with the return … END_OF_DOCUMENT_TOKEN_TO_BE_REPLACED