DAYTONA BEACH, Fla. – Joey Logano, the kid who’s had greatness predicted for him since he was 15, won the 57th running of the Daytona 500.

A frenetic final few laps as most of the 43-car field barreled around the 2.5-mile superspeedway three-wide, injected some life into what had been a snoozer for most of the first three-quarters of the race.

Justin Allgaier wrecked with three laps to go, setting up a two-lap sprint to the finish. They restarted with Logano in the lead, followed by Denny Hamlin and Jimmie Johnson. Logano got a great restart, held off a late charge from Kevin Harvick (2nd) and Dale Earnhardt Jr. (3rd) before a wreck behind them on the final lap brought out a caution, ending the race.

For the 24-year-old Logano, it marked his first Daytona 500 win. 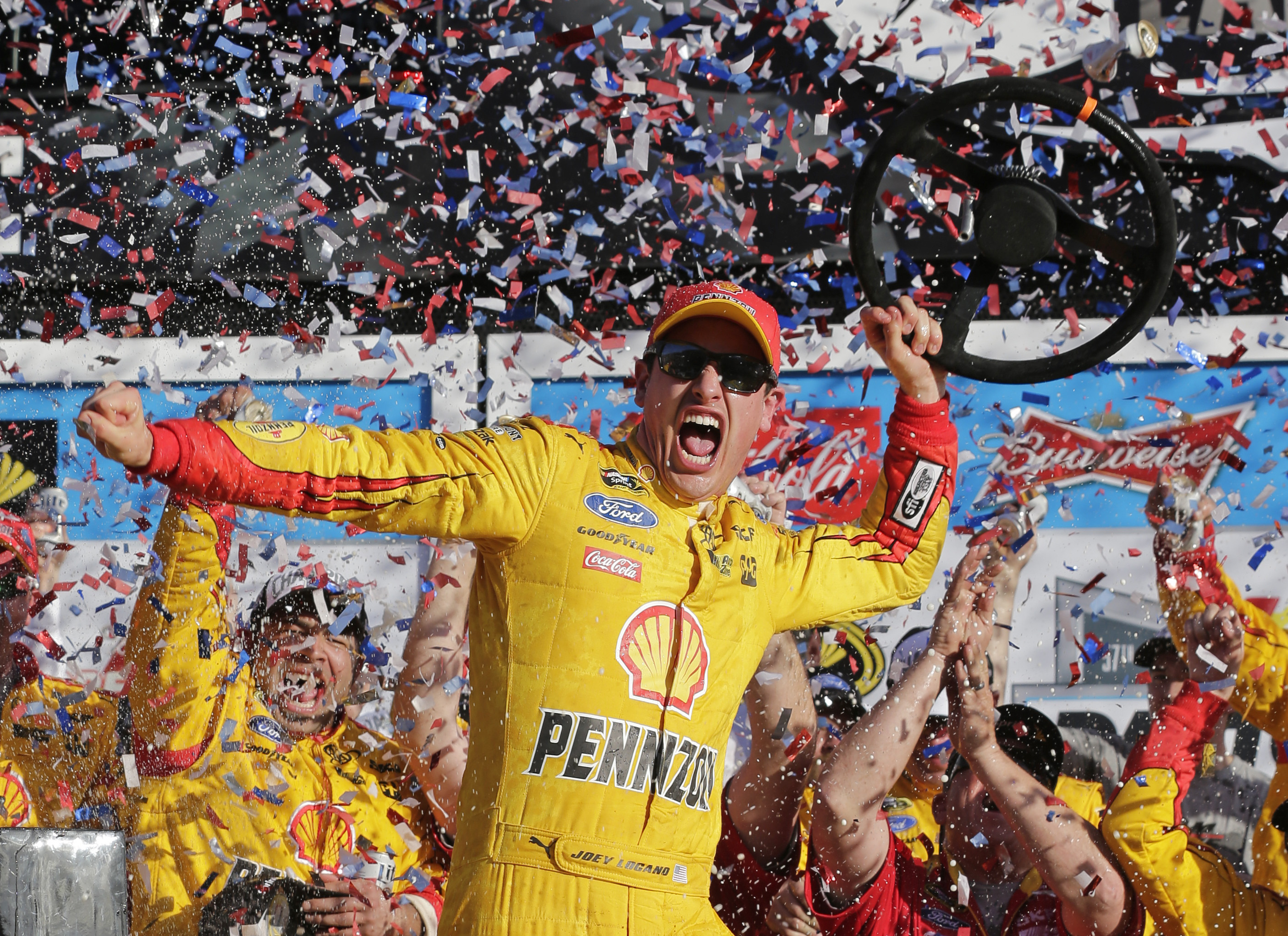 “I can’t believe it,” Logano said as he got out of his car, still gripping his steering wheel as he celebrated. “This is absolutely amazing. Daytona 500, oh my God. Are you kidding me? I was so nervous the whole race.”

Sunday’s race marked the end of one of the most chaotic Speedweeks in recent memory. Consider that in just the last few days, NASCAR, its fans, and drivers have dealt with:

• The indefinite suspension of Kurt Busch for an incident of alleged domestic violence, along with the subsequent rejection of two appeals. The second appeal rejection came just 15 hours before Daytona’s green flag.

• A vicious wreck in Saturday’s Xfinity Series race that left Kurt’s brother Kyle Busch with a broken right leg and broken left foot, an accident that set off a new round of debates over the need for SAFER barriers at all walls around the track. There’s no timetable for the return of Kyle Busch, always a championship contender.

• The pending retirement of NASCAR legend Jeff Gordon. Although Gordon hasn’t revealed the extent of his post-racing plans, he’s been adamant that this was his final Daytona 500.

Gordon, who started on the pole and led the most laps, got caught in the final-lap accident. He finished 33rd.

• An epic anti-NASCAR rant from Clint Bowyer complaining about the qualifying format.

• A desperate pair of Budweiser Duels as drivers sought to punch their ticket for the world’s most lucrative race, an event that included Danica Patrick unloading on Denny Hamlin after very nearly missing the Daytona 500.

Still, the 57th running of the Great American Race began rolling under the best weather, and before one of the largest crowds, in recent race history. Gordon, on the pole, led the first lap, and from there he and his fellow Hendrick drivers Jimmie Johnson and Dale Earnhardt Jr. led the majority of the way.

The earliest big-name drama came on lap 43, when Tony Stewart got loose coming out of Turn 4 and caught Matt Kenseth. Stewart, who is still seeking his first Daytona 500 win in a two-decade career, suffered damage to his hood and attempted to return to the race 64 laps down, but eventually surrendered and left Daytona early.

The rest of the race was a relatively calm affair until the closing laps, with only Brad Keselowski exiting the festivities early due to a blown engine. That still left more than a dozen of NASCAR’s best all in position to win the season’s biggest race.

Logano wasn’t among the favorites coming in, but as the Hendrick boys dominated the front, he was about the only one who could hang with them. By the end, they were left chasing him and never caught up.

In his first five Cup seasons, Logano notched three wins. Last season he won five times and finished fourth in the championship run. Now he starts 2015 with a victory in NASCAR’s biggest race.

“He’s a different driver really,” said former teammate Denny Hamlin, who finished fourth. “He’s really become one of the elite drivers in our sport. Every single weekend you know you’re going to have beat the 22. That’s something we didn’t say 3 years ago.”