On Day 1 of Philadelphia Phillies training camp, Cole Hamels was direct about the team’s most lingering question: He wants to be traded. On Day 2 of Phillies camp, Cliff Lee opted to answer his tough questions indirectly, using a magic 8-ball.

You needn’t consult with the fates — real or imaginary — to know the Phillies are a team in a bad place. They’re aging and overpaid, and looked destined for another year in the NL East cellar. They traded Jimmy Rollins and Marlon Byrd in the offseason, but haven’t pulled the trigger on a Hamels deal and haven’t been able to find a taker for Ryan Howard.

But Lee came to the interview podium Thursday with his magic 8-ball, which he said “showed up” in his locker. “I’m kind of glad it did,” Lee said. “It takes a lot of pressure off me.” 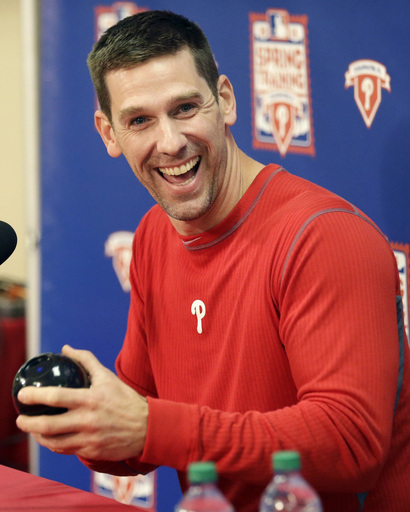 Ryan Lawrence of the Philadelphia Daily News recounts the bout with the 8-ball and the questions Lee used it to answer:

So, your team president (Pat Gillick) said this team isn’t likely to contend in the next 2-3 seasons. And Cole Hamels basically said the same thing yesterday.

So what’s your take, Cliff?

“Hold on a second,” Lee said, picking up the 8-ball and giving it a shake.

“Most likely,” he said, relaying the 8-ball’s message.

What do you think about Hamels’ comments? You signed here to win.

Yes, definitely as in you want to be traded?”

“Let me see. That’s another tough one,” Lee said. “I don’t know if I want to answer that. [Lifts up magic eight-ball] Very doubtful.”

You don’t need a magic 8-ball to tell you that trading Lee is doubtful right now. His age, contract and injury status make him hard to move. He’s 36 and he’s due $25 million this season and $27.5 million next. He only pitched in 13 games last year because of an injured elbow, going 4-5 with a 3.65 ERA.

If Lee comes out strong in 2015, though, pitching as well as he did in 2011 or 2013, and if the Phillies are willing to eat some of his contract, the magic 8-ball could be wrong. Come July, Lee could very well be traded out of town.