You are here: Home / Hockey / Chronicles of Stanley: The kids are all right; Rust's rainbow, nap

Chronicles of Stanley: The kids are all right; Rust's rainbow, nap

The Chronicles of Stanley is an occasional series this summer that tracks the Pittsburgh Penguins as they each get their special alone time with the Stanley Cup.

Weeks before his day with the Stanley Cup, Nick Bonino prepped daughter Maisie for a seat she was going to take when he brought the chalice home to Connecticut.

Practicing for a few weeks from now…stay tuned CT hockey fans for info about the Stanley Cup’s public appearance pic.twitter.com/Ic8oHikPAn

Maisie wouldn’t take her rightful place in the throne at several events across the state until later in the day as her dad jam packed his day with the Cup; which included a brief round of golf – like 30 minutes brief.

The biggest parts of the Bonino family’s day centered around a good meal, visiting the place where his hockey career really took off, and giving back.

Checking out what was eaten out of the #stanleycup this week. Pasta with Nick Bonino @penguins @NHL @HockeyHallFame pic.twitter.com/vDyuFm6CIj

From the Hartford Currant:

“Nick would say, ‘If we ever win the Stanley Cup, we’re eating pasta out of it,” Nick’s mom, Joanne, said.

“His grandparents are probably Nick’s biggest fans,” Lauren [Bonino’s wife] said. “Poppa calls Nick before every single game. He leaves him a voicemail.”

Joanne’s dad, Jim Orsini, is 93. Her mom, Nina, is 90. Nina broke her hip and is doing well in rehab, so the feast would have to go to her. Nick cooked the pasta, Joanne said. Tuna fish with angel hair, Steve said. Yes, Lauren said, it is Nana’s secret tuna fish pasta.

They brought it to The Reservoir in West Hartford. Mr. and Mrs. Orsini: Dinner for two, compliments of Lord Stanley.

“I think that’s the one memory I will cherish the most,” Bonino said. “My Nana and Poppa kissing the Cup and eating pasta out of it is something I will never forget.”

Following lunch and Nick’s brief round of golf, the Bonino family headed to Avon Old Farms School, the alma mater of the Penguins’ forward.

Now it was time for the seemingly always relaxed Maisie Bonino to take her seat inside the chalice in front of the masses.

Somewhere between 4,000 to 5,000 people showed up at Avon Old Farms to get their picture with Bonino and the Cup.

A donation box was set up to collect funds for the Connecticut Children’s Medical Center prior to fans reaching Bonino and the Cup. According to ESPN, after two hours the donations reached an estimated $5,000.

The staggering amount of people left Bonino on a tight time schedule. He had to improvise with hundreds of fans left in line. He grabbed the Cup and walked next to the line so everyone could take a look as he left.

#Bonino Why he spent his day with the cup in a town that’s has not had pro hockey in 20 years #WTAE at 11 #Penguins pic.twitter.com/TcNQbRgmGR

Bonino’s last major stop of the day was at the Connecticut Children’s Medical Center of which he was collecting donations for at Avon.

The Cup, Bonino and his crew were carted around all day by the ride service Uber. Bonino and the company partnered together to present the medical center with a $10,000 donation. Maisie posed again in the Cup for a picture with the customary giant check.

Nick’s determination to visit the Children’s Medical Center with the Cup came after years of visiting children’s hospitals with teammates.

It was Maisie who put it over the top and pushed him to do more than just visit. That not only reflects on the person that Bonino is, but the values instilled by his parents while growing up. 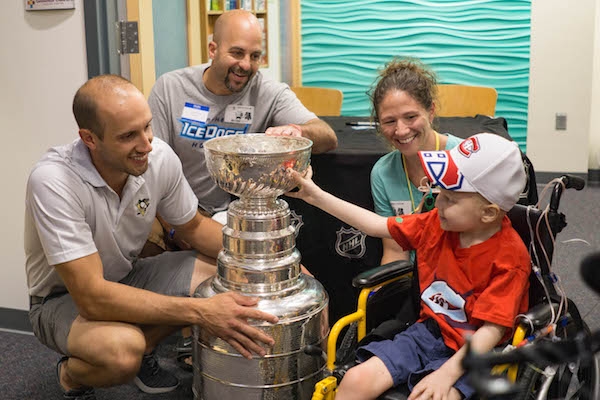 From Amalie Benjamin of NHL.com:

“[Visiting the medical center] was one of his main plans,” Bonino’s father, Steve, said. “It’s hockey players, all of the athletes, they all do it. But this is special. You look at this as a parent and you’re like, wow, I guess you did something right.

“He’s a humble kid. He’s a good kid. We have a daughter, they’re just great kids. But this, this just warms your heart.”

“Having a child and doing visits to children’s hospitals with the Penguins and with the [Vancouver] Canucks and with the [Anaheim] Ducks, it’s eye-opening,” [Nick Bonino] said. “It definitely changes the way you look at life, those kids in there haven’t had the best fortune, but you wouldn’t know it by their demeanors, by the way they act. Especially with Maisie, I knew this platform was the way to maybe raise some money.”

Ian Cole took the Cup home to Ann Arbor, Michigan. Like Bonino and many of his teammates before him, made one of his main stops of the day at a children’s hospital.

At the C.S. Mott Children’s Hospital, he was greeted by a Storm Trooper named Blasty; who rocks the colors and logo of the University of Michigan. (No word as to if that is Jim Harbaugh underneath the uniform. We’re just going to assume it is.)

May the Force be with you at #michigan. Ian Cole brings the #stanleycup for a visit @NHL @HockeyHallFame @penguins pic.twitter.com/fanXP1xbwI

Together, the hospital and Cole came together to celebrate #LittleVictors. Patients and parents alike got a chance of the lifetime to pose with the historical trophy and the Stanley Cup winner.

Nick Cotsonika of NHL.com was along for the ride with Cole.

He writes about interactions at the hospital show just how awesome seeing the Stanley Cup is for a puck head – even if it is a player from a team that’s not your favorite that brings it to you.

He held Owen Saba, a 5-month-old who was going home Friday after a 40-day stay for open-heart surgery, as the baby’s father, Fareed, a Blackhawks fan, snapped pictures of the baby and the Blackhawks’ names on the Cup.

He spun the Cup around like a top for Travis Rathman, a 20-year-old having surgery for fluid on the brain. Rathman was at Joe Louis Arena when the Detroit Red Wings won the Stanley Cup in 2002. So Cole showed him where the 2001-02 Red Wings’ names were engraved and where the 2015-16 Penguins would be. 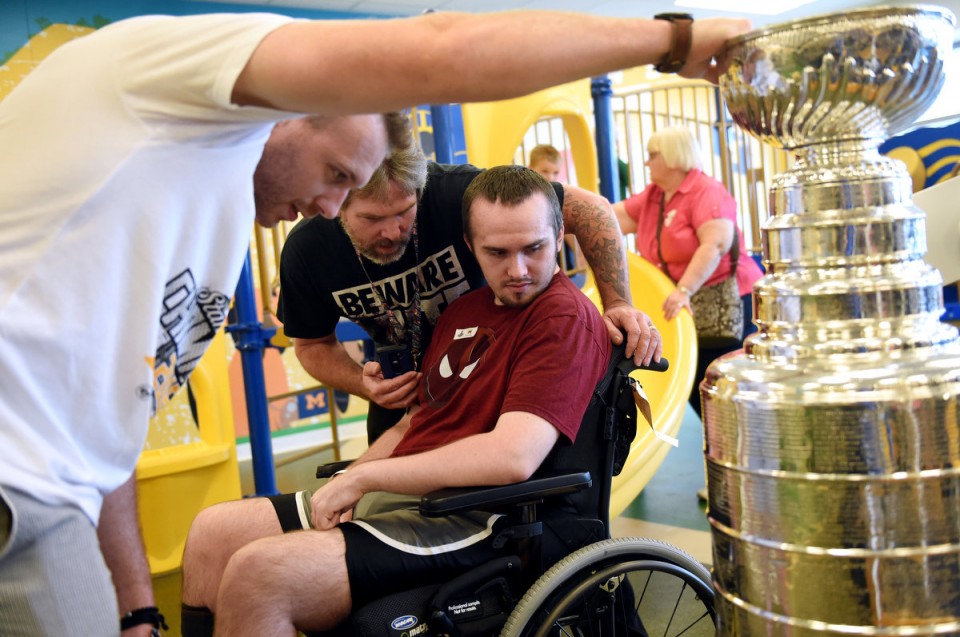 Like Bonino’s father, Cole’s mother reflected on the good human her son had become. From Cotsonika:

Cole’s mother, Connie, wore his Penguins sweater to the Ice Cube. Her eyes were red with emotion, not just for her son winning the Cup, but for what he did with it.

“When he was a little kid, I just told him always that God gave you a gift, and if you work hard with it, your dreams can come true — and he gave you a gift to use it well after your dream comes true, to pass it forward,” she said. “So I’m proud of him as a human being and as an athlete.

Thus far in the Penguins celebrations with the Cup, Bryan Rust wins for best pictures.

Last week we previewed Rust’s snack of champions from the bowl of the Cup – McDonald’s french fries. The look on his face is priceless for someone who has a serious case of the munchies.

Lord Stanley’s spirit was shining upon Rust and company as a rainbow emerged from the dark skies overhead.

It’s cliche to call the Stanley Cup the prize at the end of the rainbow, but here it’s really, really appropriate.

.@rustyyy_92 found the treasure at the end of the rainbow! pic.twitter.com/2N522MB4af

THEY’RE ALWAYS AFTER ME LUCKY CHARMS.

The third installment of Rust’s picture collection gives us a chance to pull up (again) an oldie but a goodie.

Please recall the first time Sidney Crosby won the Cup. The plucky youngster decided to snooze with his arm draped around the chalice and we were all treated to a picture that will never go away. 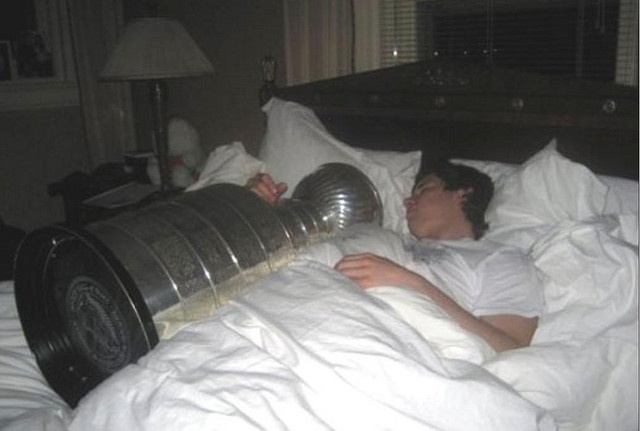 Rust followed suit by getting in a midday nap while the Keeper of the Cup took a photo and tweeted it out.

Everybody deserves a nap. Bryan Rust shares his bed with the #stanleycup. @@penguins @NHL @HockeyHallFame pic.twitter.com/EHUT1KHPPw

No. That’s not creepy at all. Pretty sure Rust doesn’t mind as long as the Cup is there, too.

Jen Neale is an editor for Puck Daddy on Yahoo Sports. Have a tip? Email her at [email protected] or follow her on Twitter! Follow @MsJenNeale_PD.