RIO DE JANEIRO — The party raged as the rain fell at the Closing Ceremony of the 2016 Rio Olympics on Sunday night at Maracana Stadium, as the Games of the XXXI Olympiad officially reached their finale.

(Although one more event, Navigating Incredibly Long Airport Lines, had yet to be completed.)

Here are 10 of the most memorable moments from the 2016 Rio Closing Ceremony.

Maracana Stadium is an open-air stadium, which unfortunately meant the Closing Ceremony was exposed to the elements. A steady rain fell during it, as it had for most of the evening, and could be seen blowing through the stadium under the lights.

But the athletes didn’t let it rain on their parade: Using hoods, plastic ponchos and official team umbrellas, the danced through the drops and kept the energy up as the rain came down.

The Brazilian anthem has been one of the most pleasant discoveries for those visiting Rio for the first time. It’s sort of a jaunty, Gilbert and Sullivan-esque song that sounds great when sung by a stadium.

Combine that with a children’s choir and an awesome visual – young singers in light-up costumes, who eventually become the stars on a massive Brazilian flag – and the ceremony got off to a rousing start. 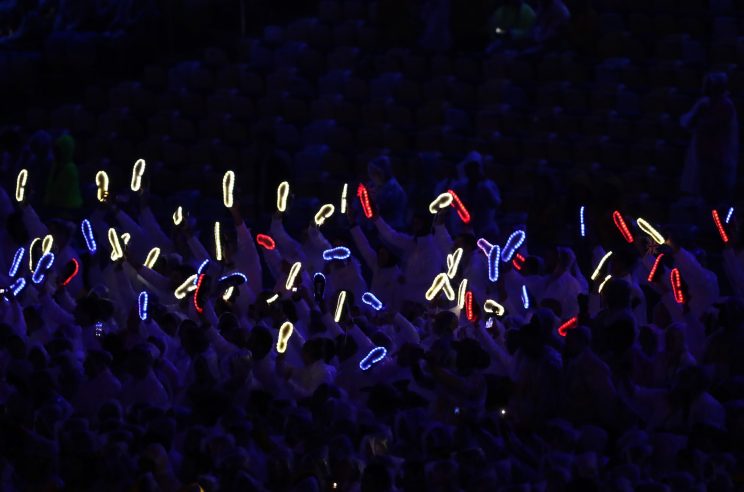 The athletes’ parade was sort of a jumble of bodies, without the order of the Opening Ceremony. But when members of Team Great Britain walked into the stadium, they couldn’t be missed, wearing light-up shoes that flashed red, white and blue.

They later used the shoes on their hands to wave during the musical segments. Jolly good show!

Return of the shirtless Tongan

Pita Taufatofua, aka the Face of Tonga, returned to the Closing Ceremony wearing a bulky sweater and … who are we kidding: He was shirtless and oiled up, as is tradition.

Tonga’s Opening Ceremony flag-bearer competed in taekwondo, where he didn’t medal. And yet, oddly, made us all winners.

The best kind of Olympic ceremony is the one with the really crazy, freaky stuff that springs from the host nation’s culture.

This Closing Ceremony, then, succeeded in that regard because OH MY GOD WHAT THE HECK ARE THESE MONSTERS? 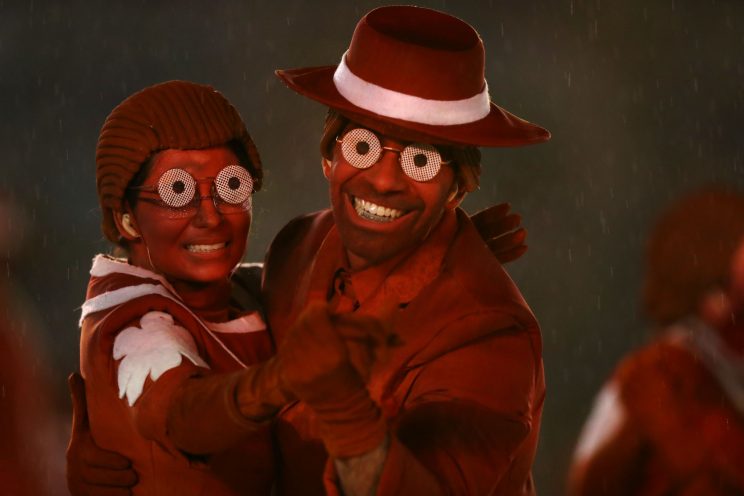 They’re “clay figures” that have come to life, to represent the Brazilian tradition of craftspeople creating them to represent everyday life.

Or, in this case, a fever dream you had after drinking the water at the open-water swimming venue.

With the Summer Games headed to Tokyo in 2020, we figured there would be some sort of character tie-in with the handover. Pikachu? Hello Kitty?

No, it was Super Mario.

Except it wasn’t really Super Mario! It was Japanese Prime Minister Shinzo Abe cosplaying as Super Mario and emerging from a giant sewer pipe in the middle of the stadium! Tokyo is going to be bonkers! 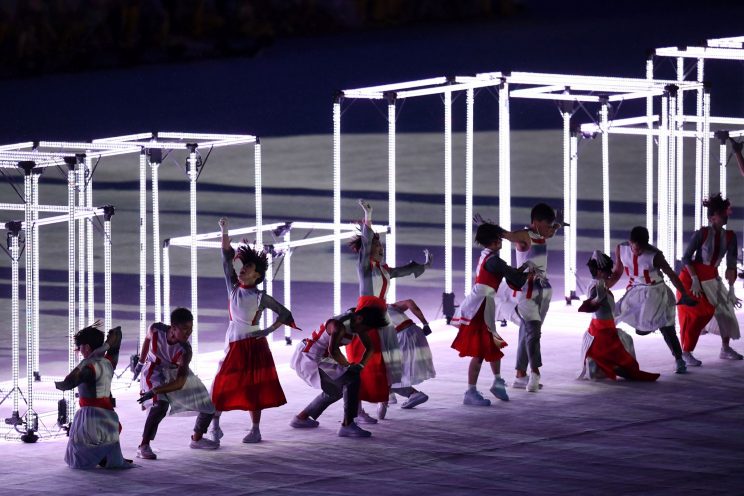 Seriously, everything about the Japan portion of the Closing Ceremony was like going to see a movie and being more impressed with the trailers than the featured presentation. There was a futuristic vibe to it that made you completely intrigued with what they’re going to end up doing with the Games. We’re guessing robots. Lots of robots.

C’mon, we couldn’t get through this without one more mention of #RioProblems.

According to the organizers, the Closing Ceremony was sold out. For whatever reason, there were plenty of empty seats in the lower bowl, which unfortunately faced the TV cameras, giving them extra focus.

But for an Olympics that was plagued with empty seats and no-shows at its events, this was oddly appropriate. 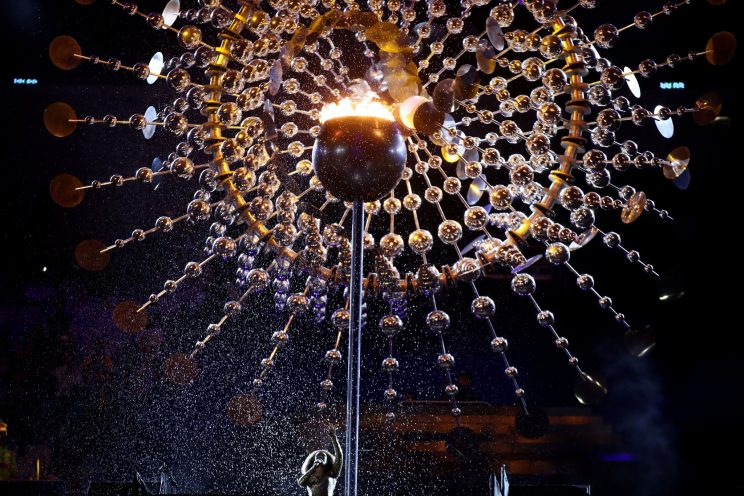 Mariene De Castro, a Brazilian singer and actress, sang in front of a manmade waterfall as rain continued to fall around her during the extinguishing of the Olympic cauldron. It was a stunning visual, thanks in no small part to the art instillation behind the cauldron created by Anthony Howe, which was arguably the Olympics’ most perfect creation. 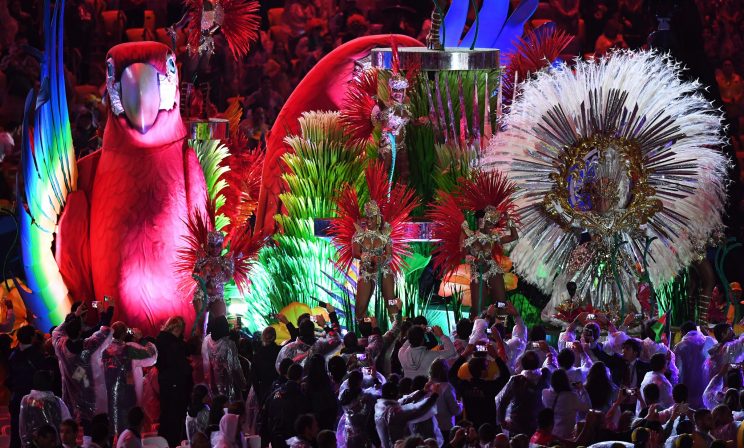 Finally, the grandest of grand finales for the Rio Games: a full-on Carnival party, including dancers and floats and confetti and conga lines.

The “Cidade Maravilhosa,” the official anthem of Rio De Janeiro, played while samba dancers moved. Carnival Queens waved to the crowd. The athletes moved from their seats to the floor and partied. And the celebration raged long after the show ended. 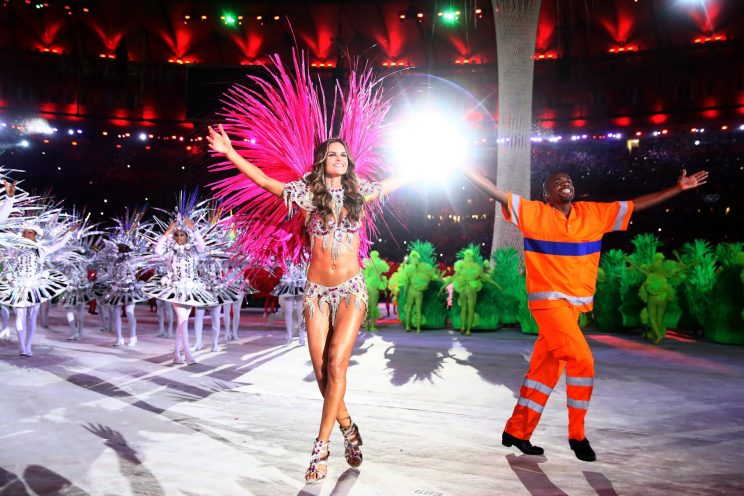 It felt like the heartbeat of Rio, which made it a perfect end to the first Olympics ever held in South America.

Listen to Yahoo Sports’ Greg Wyshynski podcast from Rio on GRANDSTANDING, featuring a Ryan Lochte Controversy Edition with Pat Forde of Yahoo Sports and Bruce Arthur of the Toronto Star!