You are here: Home / What's Happening / The 10 strangest stories of the Rio Olympics

The 10 strangest stories of the Rio Olympics

When we think back on these Rio Olympic Games, we’ll remember the blinding speed of Usain Bolt, the domination of Simone Biles and Katie Ledecky, the ageless brilliance of Michael Phelps, the peculiar storytelling of Ryan Lochte. (For more on the top stories of the Olympics, click here.) That’s as it should be; these are our greatest athletes, and we should recall them for their greatest achievements. (Well, not Lochte’s storytelling.)

But it’s not all anthems and glory at the Olympics. We’ll also remember the strange moments, the misfires and misplays, the faces and flops. Let’s run them down, shall we?

2. Green water: We knew coming into Rio that the open waters off the coast would be treacherous and unhealthy, but the contained ones seemed safe. That is, until the diving pool turned green one morning, and stayed that way until a full water transfusion.

3. Irish boxer throws a fit: Ireland’s Michael Conlan appeared to have easily defeated Vladimir Nikitin of Russia, but the judges didn’t see it that way. In the wake of the loss, Conlan unleashed a profane rant for the ages, claiming, “I came for gold and I’ve been cheated. I’ll not do another Olympics.” Adding insult to injury, Nikitin ended up dropping out of his next fight, sticking with the bronze.

4. Pole vaulter’s equipment: Japanese pole vaulter Hiroki Ogita failed to qualify for the pole vaulting final after it appeared that he dislodged the pole with, well … with his penis, folks. With his penis. Further replays appeared to show he probably knocked off the pole with another body part, but that wasn’t nearly as painful, or viral, of a story.

5. The shirtless Tongan: The Opening Ceremony was a genial, colorful spectale as athletes from every country marched into Maracana Stadium … that is, until Pita Taufatofua of Tonga, shirtless and greasy enough to slide around the track, led the nation of Tonga. He didn’t exactly light the Olympics on fire in his taekwondo match, but he fluttered plenty of hearts during his brief turn in the spotlight.

6. The stripping coach: This one came in right under the wire, happening just hours before the Closing Ceremony. The coaches for wrestler Mandakhnaran Ganzorig of Mongolia absolutely lost their minds when Uzbekistan’s Ikhtiyor Navruzov won a highly curious decision. One coach doffed his shirt, and another stripped to his underwear and screamed in protest, to no avail but high humor.

7. Diving for gold … on a track: Felix ended up on the wrong side of another controversy, when the Bahamas’ Shaunae Miller dove across the line at the end of the 400-meter run to defeat Felix by 0.07 seconds. It was legal, but it struck many observers as a less-than-upright way to win a foot race. 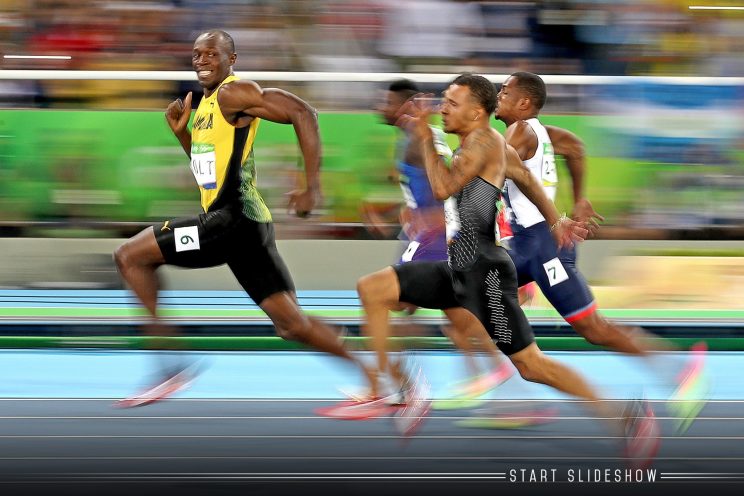 8. The smiling sprinter: You simply will not find a better photo of Usain Bolt, and probably not a better sports photo all year, than the one where the Jamaican sprinter is smiling as his opponents are racing the sprint of their lives. Bolt is so far ahead of everyone else already; the smile just makes his grace perfection.

9. IOC member arrested: You know, when you’ve got a prominent member of the International Olympic Committee accused of scalping tickets for profit, that’s a pretty bad look. But when said member is hauled from his hotel room virtually naked, well, that belongs on a stranger-things-from-Rio list.

10. Dancing horses: In the actual Olympics, horses danced to Vanilla Ice and Santana. We don’t have anything more to add than this.

____
Jay Busbee is a writer for Yahoo Sports and the author of EARNHARDT NATION, on sale now at Amazon or wherever books are sold. Contact him at [email protected] or find him on Twitter or on Facebook.