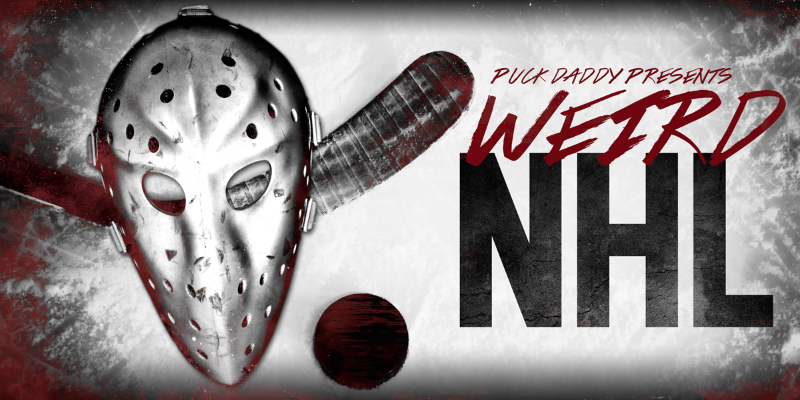 By: Joe Boughner and Mike Wheeler of Radek Bonk’s Mullet

1. The goalie so nice we drafted him twice

At the 1998 draft, the Ottawa Senators stepped to the microphone in the first round and drafted Mathieu Chouinard. Coming off of a 32-18 season with the Shawinigan Cataractes, Chouinard was the second goalie taken in the draft and was considered to be a solid prospect. 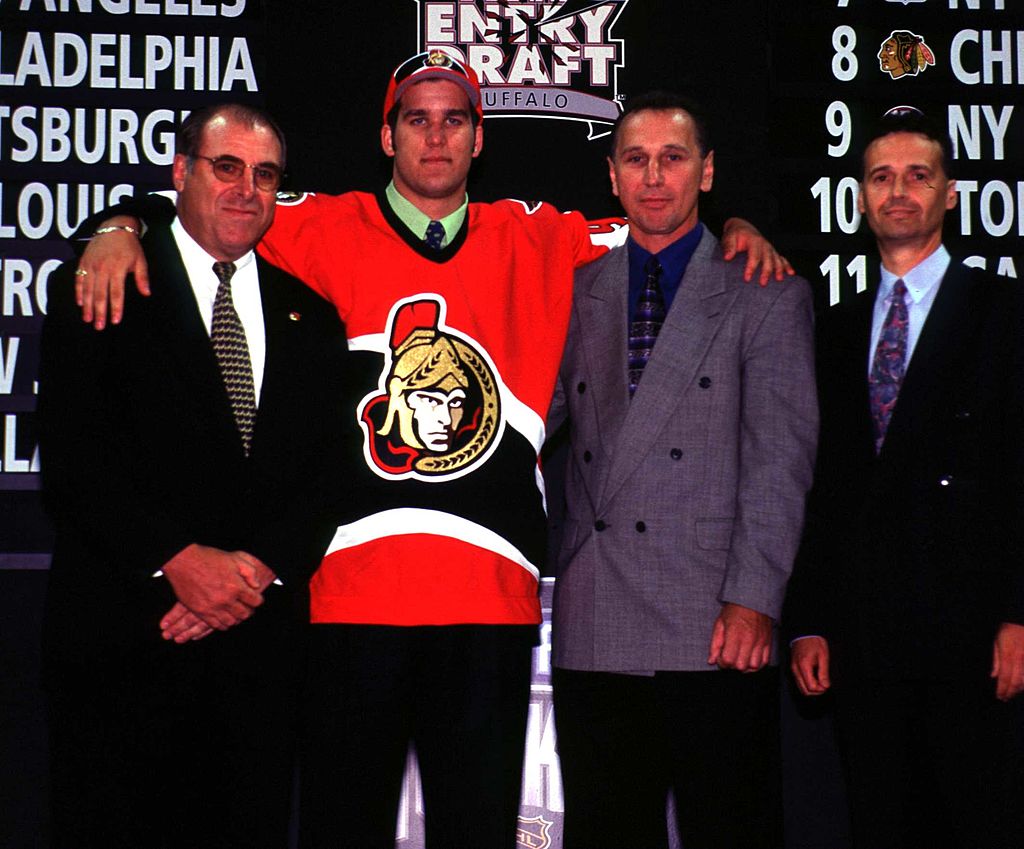 After failing to reach an agreement on his entry-level contract, though, Chouinard opted to head back into the draft in pursuit of a new start. He got that chance in the second round when he was drafted by…

“The goalie so nice we drafted him twice” spent three years in the Senators organization before signing with the Kings. There he finally got his cup of coffee in 2004, playing two minutes and making two saves before disappearing from hockey consciousness… FOREVER.

Oh wait, nevermind, he’s on Twitter. Turns out he’s coaching in Quebec and, from all appearances, keeping things in perspective. 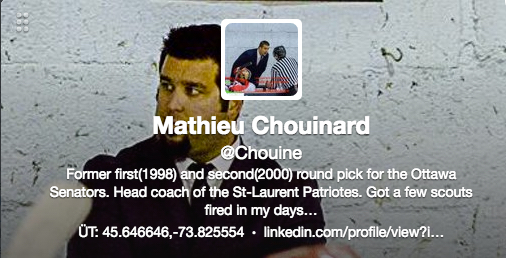 Scratch that. We just did. 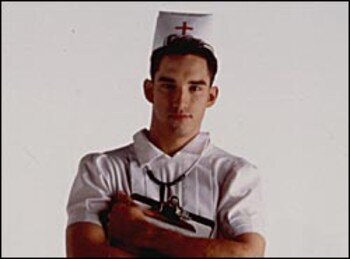 “Hey, I just got a fax from Score, the hockey card company. They want to promote their new set with the guy we just drafted first overall, Alexandre Daigle.”

“And they want to dress him up in a bunch of funny outfits to get people excited for their exclusive hockey card.”

“I think this goes great with Daigle’s exciting personality. Fans loved when he said that no one remembers who was drafted second and he was talking about Chris Pronger.”

“Back to the hockey card promotion. In one picture, he’s dressed as a mountie and saluting with the wrong hand.”

“And in another, he’s just dressed up like an old-timey nurse.” 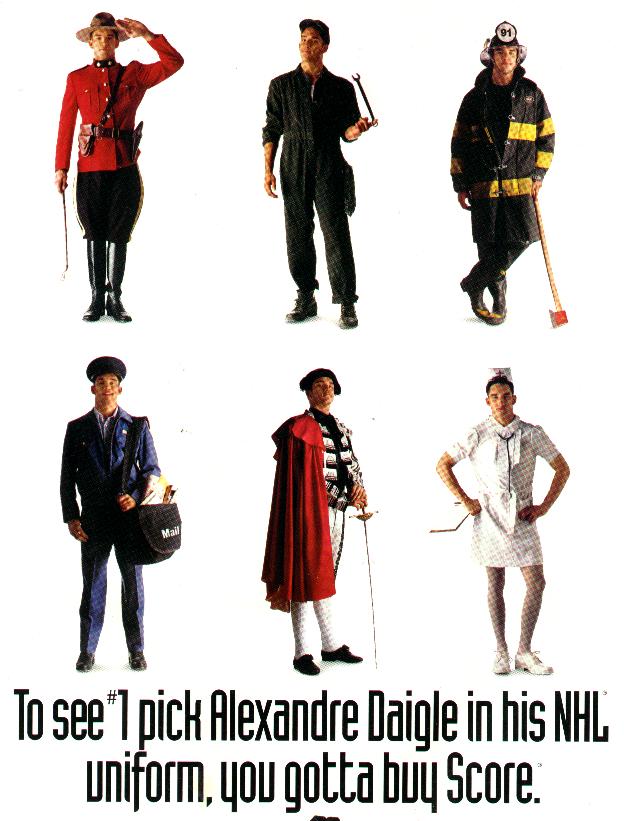 “And they want to run the nurse picture as a full-page ad in the newspapers in our market.”

“I’m sure it’s going to be a big, big hit with everybody. And even if it isn’t, at least no one will remember this in 25 years!”

“This is the best day of my life!”

Thankfully, the Ottawa Senators learned their lesson and would never do anything weird with their marketing ever again.

Except for that time when all the promotional material for the entire season featured players whose jerseys were in the wash, I guess???

“What if we tried this new marketing idea where the players don’t wear their jerseys?” pic.twitter.com/YknobGQtHl

On April 13, 2013, Daniel Alfredsson skated off the ice in Boston. He had just played in his 1,178 regular season game. At the time, nobody realized that regular season game would be the last that Alfie would play in an Ottawa sweater.

We need not revisit the unpleasantness of Free Agent Frenzy 2013 here right now. This is supposed to be weird moments, not SOUL-CRUSHINGLY-DEVASTATING MOMENTS. Suffice to say, Alfie eventually retired, Ottawa re-embraced their hero and order was restored. The leader in career games played was back in the fold. Everything was right in Sens land.

But then it got weird.

With 18 seasons as a member of the Ottawa Senators, Chris Phillips was a key member of the team for a generation, reliably plying his trade as a no nonsense top 4 defenceman, but outside of the northern nation’s capital he’s not really a household name.

What he is, though, is the record holder for most career games played as an Ottawa Senator.

See, less than three months after Alfie came home and reclaimed his place as Ottawa’s favourite son, Chris Phillips beat the games-played record. He’d actually sat out a road game in New Jersey so he could break the record on home ice (though he’d been battling injury so coming in and out of the lineup was not that unusual). Alfie was there. His kids were there, with adorable signs congratulating their daddy.

He literally hung on just long enough to beat out the Senators’ most beloved captain.

Yea, thanks for the memories, Chris.

You might think that a fan-inspired tradition of throwing hamburgers onto the ice to celebrate the emergence of an unheralded goalie with Alfred E. Newman as The Hamburglar on his mask would be weird enough to make this list on its own.

But just in case it wasn’t, rookie Curtis Lazar had to take it up a notch and eat one of the burgers.

That’s right, fans threw burgers of unclear origin on to the ice at the Canadian Tire Centre to celebrate Andrew Hammond’s role in the Senators’ unbelievable run to the playoffs and Curtis Lazar picked up one of them and ate it.

He ate a burger that was thrown on to the ice.

But honestly, we’re all just about done being mocked about the freaking centurion dude, ok?

#Rhiannaing was a thing that happened.

As was this, when our owner encouraged everyone to cheer on a divisional rival.

And this, the creation of CSI Ottawa.

Oh and remember when our goalie fought… everyone?

Or when everyone fought everyone, even Jason Spezza?

But let’s be honest, the very fact that the franchise exists is weird, right?

About the authors: Joe Boughner and Mike Wheeler are two of the keyboard bashers that make up the “writing” “staff” at BonksMullet Dot Com. They both love the Ottawa Senators which is too a thing that happens sometimes. Follow them on Twitter: @McLlwainsWorld and @TheMikeWheeler.