You are here: Home / What's Happening / Top five moments from Day 11 of the Olympics

Top five moments from Day 11 of the Olympics

There’s less than a week left in the 2016 Rio Games, and the drama is still building. Tuesday’s action was packed with stunning upsets, last-second victories and feel-good stories that kept the world’s attention late into the night.

Relive five of the many highlights from the day here:

Argentinean sailor Santiago Lange has done a lot in his life. One year ago it was losing half a lung to cancer. Tuesday? Winning an Olympic gold.

The 54-year-old, along with sailing partner Cecilia Carranza Saroli, took the top spot in the Nacra 17 Mixed Multihull to bring some more hardware in his sixth career Olympic appearance. Lange was diagnosed with cancer last year, but he wasn’t going to miss the first Games to be staged in South America.

“This may help to give strength to many people who are going through what I’ve been through,” Lange said. “But I prefer to focus on what we did athletically. The disease has nothing to do with it, it was a stone in the road. I became obsessed with getting to Rio very well prepared and we did.”

Buzzer-beater sends Spain to the semifinals

The final moments of Spain’s 64-62 victory over Turkey were – to put it most accurately – chaos in its purest form.

Down by a pair with 10 seconds left, the Turkish women’s basketball team raced down the court to tie the game at 62 with 4.2 seconds remaining. The bench went wild.

Spanish star Anna Cruz suddenly took the inbounds pass and sprinted back the other direction, leading right at the 3-point line with a second left in regular time. The buzzer went off as the ball swished through the hoop, sending the other bench into hysterics.

Turkey seemed to have everything under control with an 8-point lead and less than four minutes remaining in the final quarter, but a dramatic collapse, sudden recovery and another dramatic collapse left them stunned. It all happened at Usain Bolt-speed and, ultimately, Spain advanced to the semis while Turkey heads home empty-handed.

To the shock of the world and Hope Solo, the Swedish women’s soccer team lives to see another day. Days after felling the U.S. in penalty kicks, Sweden dealt the same devastating blow to the host country – much to Brazil’s horror.

The 4-3 penalty kick victory after a 0-0 draw was, again, a result of the team’s defensive mindset and goalkeeper Hedvig Lindahl’s stellar play in goal. For the second match in a row, Lisa Dahlkvist scored the decisive penalty kick.

Sweden, which has never medaled at the Olympics, is set to make history Friday against Germany, no matter the result.

One day after a slip on the balance beam dropped Simone Biles to bronze, the star U.S. gymnast found her way back to the top of the podium. Right behind her was Aly Raisman, giving the American team two more medals to add to its impressive count in Rio.

[Related: What the future holds for Biles, Raisman and the sport of gymnastics]

Biles became the first woman gymnast since 1968 to win four of six possible gold medals at one Summer Games. The 19-year-old has established herself as one of the greatest gymnasts in history and was joined by her 22-year-old teammate on the podium.

Is anybody surprised by this? Usain Bolt, dominant as always, actually appeared to slow down in the second half of his 200-meter qualifying race Monday.

A friendly reminder: This is the Olympics. And he jogged. And he won, appearing comfortable as he did it. His time of 20.28 seconds is far behind his world record mark of 19.19, but he’ll have a chance to challenge that in the final Wednesday. Will that one be as easy? Likely not, but knowing Bolt it’s never wise to underestimate him – ever. 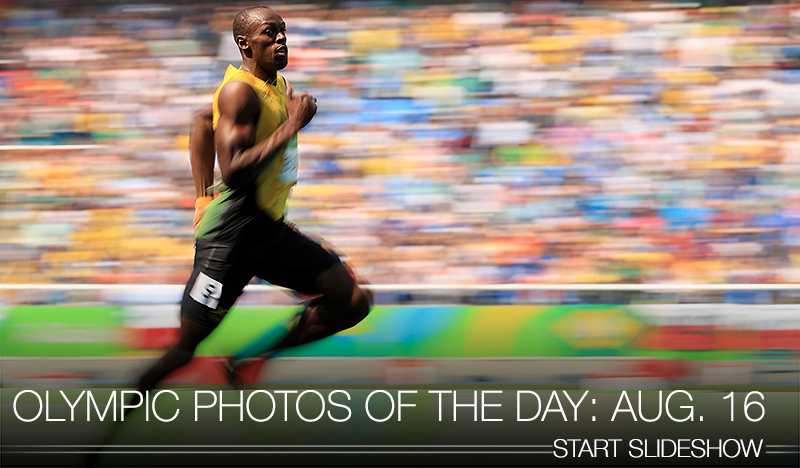