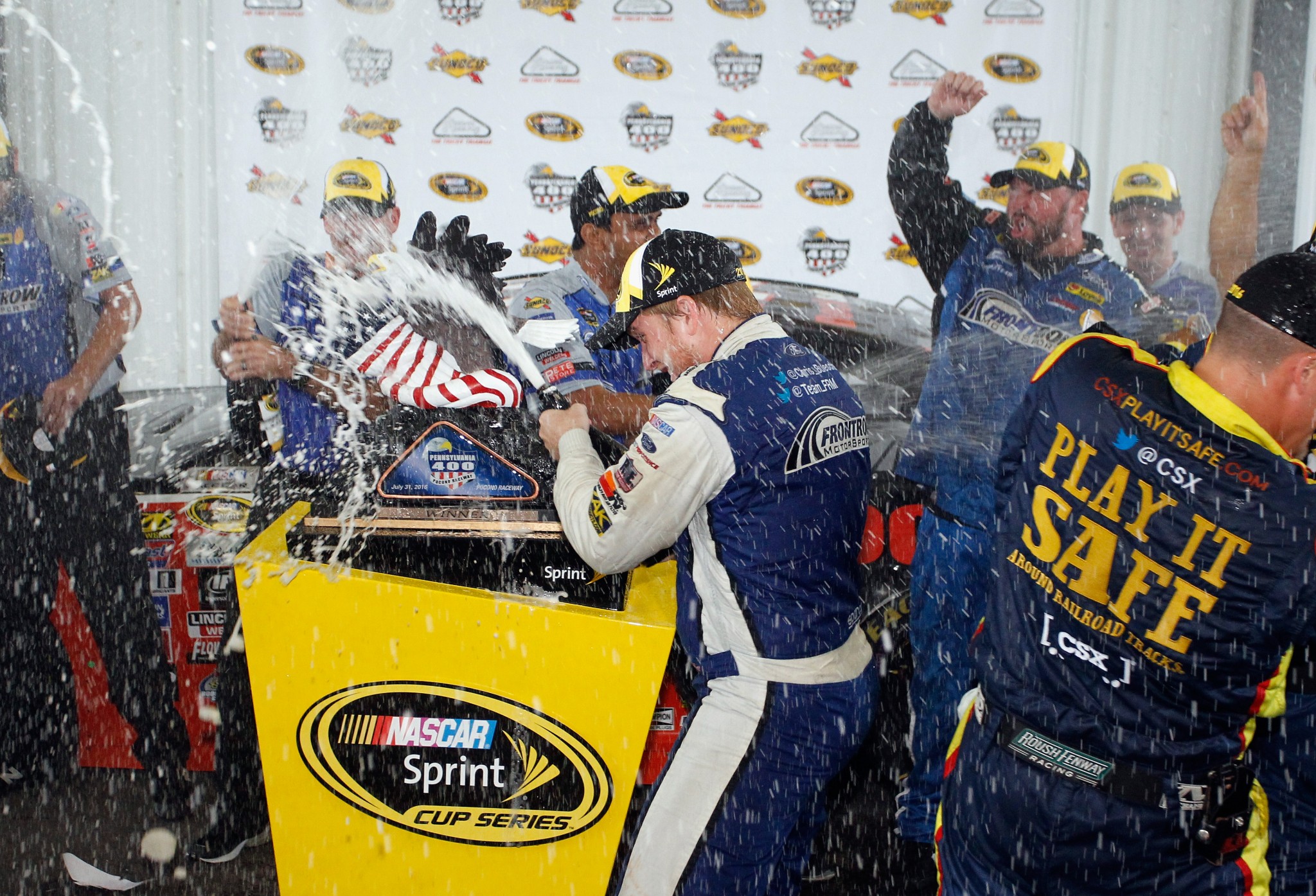 It’s time for Happy Hour. As always, tweet us your thoughts or shoot us an email at [email protected] if you want to participate.

Watkins Glen should be a fascinating race Sunday. And not just because it’s final road course race of the season.

The track has new pavement, and while we’re familiar with how new pavement affects the racing on high-speed ovals, it’s still an unknown how it will affect the racing at a road course.

The track will be faster, and generally faster doesn’t mean better racing. Will that hold true at the Glen? We certainly hope not, given how awesome the racing has been at the track. And hopefully it’ll be a two-groove racetrack too. It’ll be no fun if turn 1 isn’t the passing zone it normally is.

Oh, and a friendly reminder that Sunday’s race will be on USA because of NBC’s Olympic coverage. Please, don’t complain about the different channel. USA has a wider distribution than NBCSN and the Olympics take priority over NASCAR.

If you haven’t seen it already, this blog entry by Camping World Truck Series driver Tommy Joe Martins is thought-provoking. It’s especially so if you’re worried about the competitive imbalance in racing and how big teams continue to succeed while little teams face a mountain climb with little to no gear.

Who would have thought that Chris Buscher would be the one to break through with a win (weather shortened or not) over Chase Elliott or Ryan Blaney? – Brian

Definitely not here. Hell, Brian Scott might have had a case to be the No. 3 rookie over Buescher given their team situations entering the season. But Richard Petty Motorsports has been flat horrible in 2016, so even without the win Buescher was the No. 3 rookie.

A win is a win is a win and we’re not going to attempt to de-legitimize Buescher’s win at Pocono. But we are wondering just how often we’re going to see him mentioned in the same sentence as Elliott and Blaney during broadcasts.

And that wonder is two-fold. Both Blaney and Elliott drive for powerhouse teams (the Wood Brothers are essentially a third Penske car) and both have shown speed that Buescher hasn’t throughout the season. Buescher will likely still be mired outside the top 25 even if he ends up passing Regan Smith in the points standings.

Blaney and Elliott will be racing for a Chase spot over the next five races. And so will Buescher, though his “race” to make the top 30 may not be nearly as attractive.

What is happening to crowd / attendance at NASCAR events?  I wanted the Formula One race from Germany on Sunday and there were people everyplace.  No idea on crowd size, but my guess is over 100,000.  The track at Pocono was nothing on Sunday before it was called and today is was officially a “joke.”  Is it name recognition?  Ticket prices?  Rules changes?  Too many races?  I live in Clarkston, MI and support the heck out of many forms of racing.  For years I was part of the Detroit Gran Prix when it was Formula One.  I just find it terrible and there needs to be a fix.  Or it will look like Indy Car racing, unless the race goes to Elkhart Lake. Wow, it’s amazing.  Someone needs to start a dialogue and get NASCAR’s ear. – Jim
We talked a lot about attendance last week in Happy Hour, but the Germany race is an interesting point. It wasn’t well-attended because of ticket prices. According to the NBCSN coverage, the cheapest ticket was €280. Yes, there is no decimal there.
That’s obviously something not everyone can afford. But this was the first German Grand Prix since 2014 and Hockenheim and the Nurburgring have rotated the races. So it’s not like F1 is racing the German Grand Prix at the same track each season.
So demand is certainly something. The economy is much better than it was eight years ago, but economic woes still linger for some workers; hence why a certain presidential candidate is polling the way he is.
Oh, and you can bet that officials all over racing are worried about attendance. Heavily.
——–

This week fine for not wearing seat belt while driving to be levied to Gordon , he drove knowingly in spite , rule 1-34qng 6-2 plus 4 was ignored , crew chief suspended half an hour and fined one dollar , read more – Clyde

Clyde sends a trolling email two or three times a week and the emails are usually too profane to post. Congrats on making it, Clyde!

@NickBromberg In honor of a small team hitting it big at Pocono, think any charters will be sold soon giving a small team a big payday?

I could see Premium Motorsports selling its charter to Harry Scott Motorsports or another team that could expand for 2017. The team is leasing its charger to HSM for Michael Annett currently and the No. 98 car is outrunning Annett without a charter.

While charter teams get a bigger piece of the revenue pie than non-charter teams do, the financial windfall from a sale can help significantly offset that. And there’s also little risk in selling a charter in the current NASCAR environment. More often than not 40 cars are attempting to qualify so there’s little danger of missing a race. Or, if there are 41 or 42 cars, there aren’t too many cars to be faster than.

The most fascinating charter situation will be when/if a bigger team downsizes. Every team’s charter is the same – a race-winning team doesn’t have a charter automatically worth more than a 35th-place team. Will there be a bigger team in a position to expand who wants it? Or would bidding be limited to smaller teams without a charter?