Draft Analysis: ADP First Look: Undervalued For this look at some guys undervalued in terms of Average Draft Position (ADP), I used MyFantasyLeague full-PPR best ball data. These leagues are for real money, so I find them to have the most accurate ADP – even if best ball (draft only leagues) have some different strategy than season long. As we prepare for drafts, understanding what our opponents … END_OF_DOCUMENT_TOKEN_TO_BE_REPLACED

Former Wisconsin signee picks Nebraska - FOXSports.com CHICAGO (AP) One of the top players in Wisconsin's recruiting class is heading to Big Ten West rival Nebraska. Running back Jordan Stevenson from Dallas signed with the Badgers in February, but was denied admission to Wisconsin last week because of academic eligibility requirements. Stevenson, a four-star rated recruit, was courted by Miami, … END_OF_DOCUMENT_TOKEN_TO_BE_REPLACED 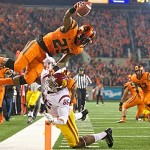 Pac-12 fans will see same replays as referees Fans at Pac-12 games will be able to see the same replays officials do during reviews. (USATSI) BURBANK, Calif. -- The Pac-12 has either hit upon the next great idea in fan engagement … or is primed for another officiating debacle. This season, the league will begin showing on stadium scoreboards the same replays available to officials when they go … END_OF_DOCUMENT_TOKEN_TO_BE_REPLACED

Offseason Beat: Summer League: Atlantic The Atlantic Division was the worst division in the NBA. It didn't have a team in the second round of the playoffs and it also had two teams in the bottom three for wins. That means this division has some potential for younger players and several of them are set for minutes out of the gate. Follow me on Twitter @MikeSGallagher Check out the other divisions: … END_OF_DOCUMENT_TOKEN_TO_BE_REPLACED 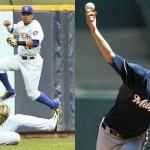 Justin Upton's home run caps wild Padres comeback at rain-soaked Citi Field All-Star outfielder Justin Upton can be had if the price is right. The San Diego Padres have made as much very clear with the trade deadline looming on Friday afternoon. He could even be had by the New York Mets if they were so inclined to take the plunge and take on the remainder of his $14.5 million salary.  That … END_OF_DOCUMENT_TOKEN_TO_BE_REPLACED

Tiger Woods rallies from rough start for 3-under 68 at Quicken Loans National GAINESVILLE, Va. -- Through four holes, it was looking like another reprisal of the Passion of Tiger. Snap-hook and a bogey on the first hole. Missed 5-footer for par on the second hole. Another dropped shot at the fourth. At 3 over through four holes, it seemed Woods was a few more bad ones away from indifference, … END_OF_DOCUMENT_TOKEN_TO_BE_REPLACED