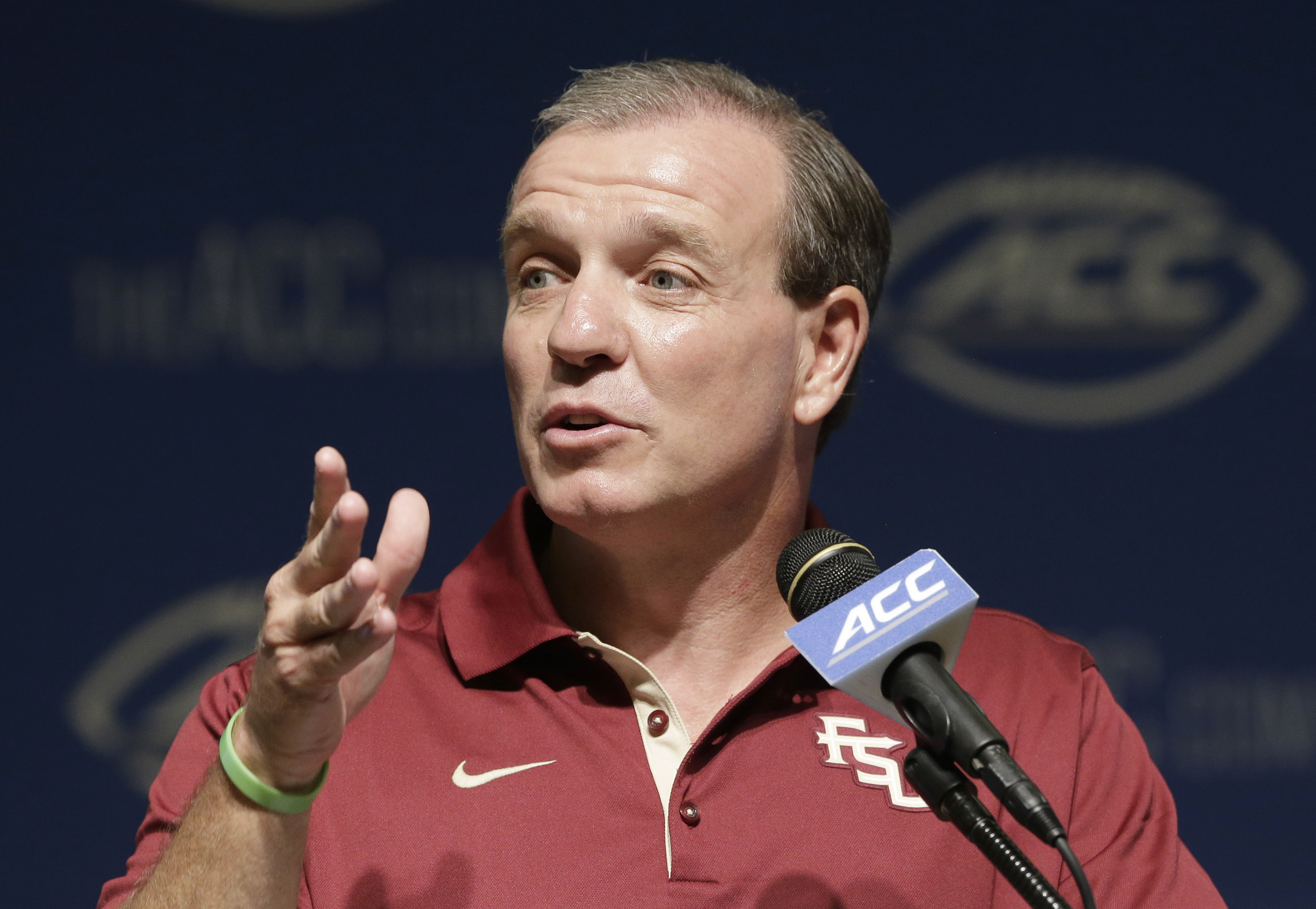 Jimbo Fisher on Tuesday condemned the acts of two of his players — one former and one current — by telling media that Florida State has zero tolerance for domestic violence.

Fisher, who was speaking at ACC media days in North Carolina, fielded more than 30 minutes worth of questions regarding the domestic violence incidences involving dismissed quarterback DeAndre Johnson and suspended running back Dalvin Cook. Both players have been charged with misdemeanor battery after two women claimed the men punched them in the face during two separate incidents at Tallahassee bars. The incidents took place in late June a day apart.

“There’s no tolerance for hitting women,” Fisher said. “You have to continue to educate your kids. We’ve had a very extensive program. We go 40 days a year of bringing in character-building people, developmental conditioning with issues: drugs, alcohol, opposite sex, domestic violence. We’ve done it from the very first day I’ve been there.”

Johnson was dismissed on July 6 shortly after state attorney Willie Meggs released surveillance video that showed Johnson striking a woman after the two jostled for position at the bar. Four days later, Cook was indefinitely suspended after Meggs decided to pursue charges when a woman claimed Cook punched her in front of a club. The woman, who suffered bruising, picked Cook out of a lineup at the police station.

Fisher was asked about Cook’s fate and said he would allow the legal process to play out. The domestic violence incident is actually Cook’s third brush with the law while at Florida State. He was cited in BB gun incident that left damage to private property, and he’s currently involved in a pending matter with the City of Tallahassee over his mistreatment of three pit bull puppies that were found chained together on his property.

While Florida State has been in the national spotlight because of the two domestic violence incidents, Fisher made sure to note that the problem was not isolated to Florida State.

“You’re judged by what you do and we’ve had a couple of instances, just like other people have, too,” he said. “It’s not a Florida State problem, it’s a national problem. It’s not just an athletic problem, it’s a domestic problem across our country. … we don’t tolerate it or accept it.”

Florida State’s disciplinary process has been a hot topic ever since former quarterback Jameis Winston was accused of sexually assaulting a female student in 2013. Winston was never charged in the case and was ultimately exonerated by the university, but it opened a Pandora’s box into whether Florida State athletes receive special treatment from local law enforcement and campus officials.

Florida State president John Thrasher is now requiring all student-athletes to participate in a program focused on social responsibility ,and Fisher said he’s working on a four-part plan, the details of which he will reveal soon. In the meantime, Fisher confirmed that he’s banned his players from bars, nightclubs and any other late night activities that could bring more trouble with the law.