You are here: Home / Other Sports / Tom Watson beats darkness, bids farewell to the British Open 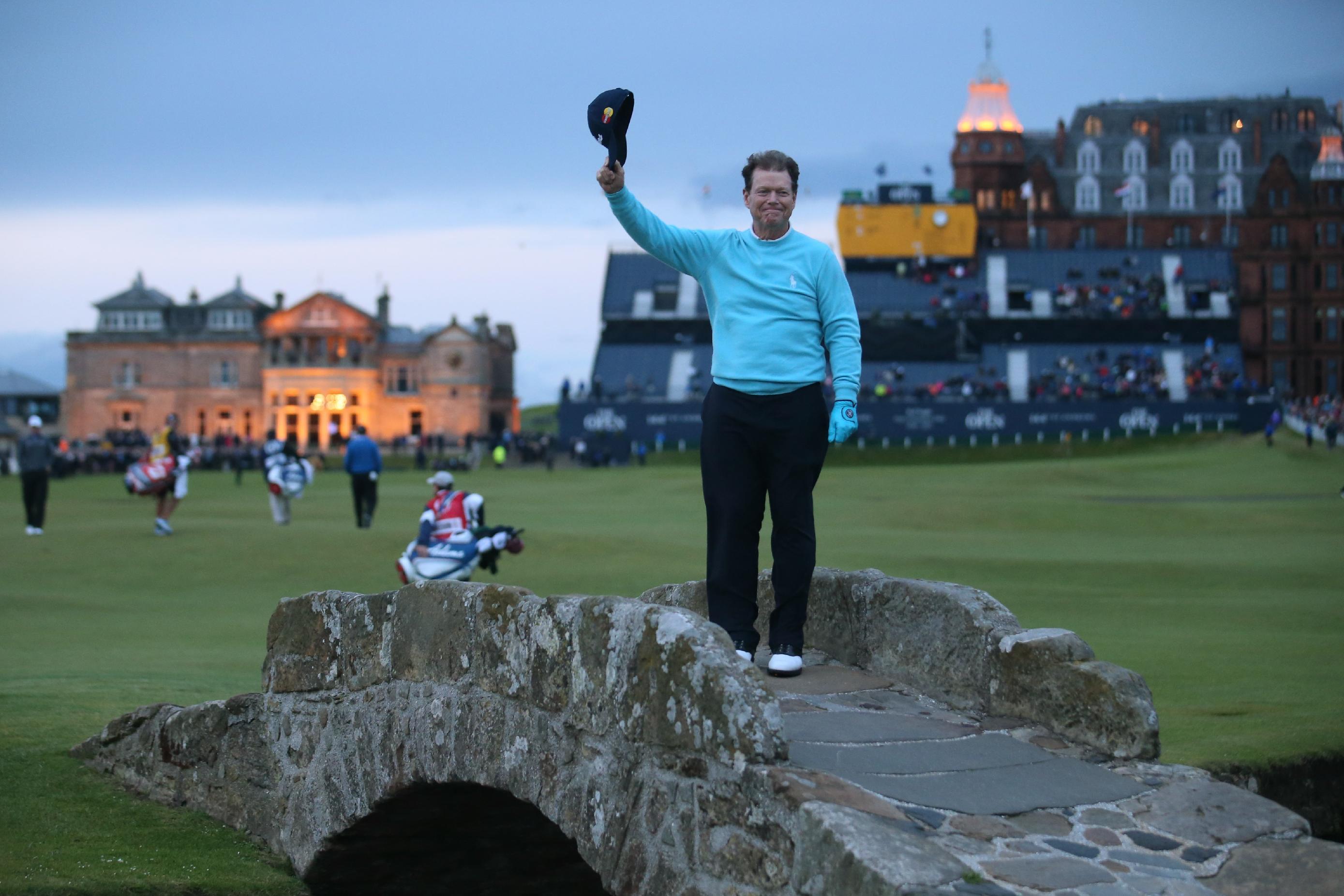 ST. ANDREWS, Scotland — As metaphors go, you don’t get any more fitting than this: Tom Watson, playing out the string on his British Open career as the sun descended behind him.

Night was falling fast, but this was Tom Watson, five-time British Open champion, and there was no way he deserved to finish out his legendary career at this historic tournament with some anemic one-hole cameo on Saturday morning.

Watson, playing with Brandt Snedeker and Ernie Els, approached the 17th tee shortly before 9:30 p.m. The sun was nearly down, lights illuminating the columns of the R&A Clubhouse and the tower of Hamilton Hall ahead. Fans, many of whom had been at the rain-soaked course for 15 hours, lined the walls of the Old Course Hotel and the grandstands. They were whistling, cheering, chanting. But no one could slow the darkness, and that meant a decision had to be made. Any of the three players had the option to stop the round right at this point and return Saturday morning.

On the tee, Watson approached Snedeker and Els. Both men sat at even par, right on the cut line.

Els turned to Snedeker. “You want to finish?”

“Yeah,” Snedeker replied, “I’d like to get it over with.”

An official approached the group and asked, “Do you want to finish?”

Watson’s second shot ended up 20 yards and three hills short of the green, and as he sized it up, a lone fan in a far grandstand shouted, “Knock it in, Tom!” He didn’t, not right away, but that didn’t matter.

Watson teed off second of the three, sending his shot so far left it nearly reached the first fairway. As an armada of three dozen photographers jockeyed for position, Watson, Michael, Els and Snedeker walked to cross the famed Swilcan Bridge together.

A Scottish course marshal barked at any photographer who tried for an edge. “Get back!” he snapped, his brogue as thick as the clouds above. “We talked about how this was going to go!”

Watson posed with his playing partners and then his son. Then Michael ceded the bridge, and Watson raised his cap to the cheering crowds. He looked to the sky, gave a last thumbs-up, and then continued his walk up the fairway.

Along The Links, the road that parallels the 18th, crowds six-deep cheered Watson. Fans leaned out of windows and whistled from balconies of the apartments along the way. Watson waved an appreciative hand at them all.

There’s no gentle way to say this: Watson’s final British Open hole was ugly. He’d shanked his tee shot, and his approach rolled onto the green, then ambled back off like it didn’t feel like letting this day end early either. Snedeker and Els both holed out, ceding the stage one last time to Tom Watson.

Watson stood over his ball, then looked back at Michael and motioned at the flag stick. “You’re going to need to put it back in,” Watson called, his voice cutting through the silence. “It’s too dark to see the hole.”

He putted from the fairway, then putted once more, his ball still refusing to go in that damn hole. Watson turned his palm upward as if to say, “Really…?”, and tapped in for a bogey 5. He finished his British Open career with a run of five straight bogeys that no one will remember that tomorrow.

Watson embraced his son, blew a kiss to the crowd, and shook the hands of his playing partners. Snedeker, it must be noted, double-bogeyed 17 after agreeing to play on, and ended up missing the cut by a stroke.

From there, Watson enjoyed a moment we should all be so lucky to receive. He walked into the embrace of family and friends on the steps of the R&A Clubhouse. Fellow players Tom Lehman, Graeme McDowell and Matt Kuchar were among the throngs waiting to greet Watson, McDowell even Periscoping the final hole for Twitter posterity.

Elsewhere on the course, Dustin Johnson, Jordan Spieth, Tiger Woods and others were marking their shots, preparing to come back Satuday morning. But for Watson, the day, and the British Open career, had come to a close.

Watson claimed he didn’t cry while walking up the 18th, but afterward, he took several long, heavy pauses as he spoke, regret and gratitude playing across his face.

“It’s all joy,” Watson smiled. “There’s no reason to be sad. I played a game for a living, and I played it pretty well.”