You are here: Home / Basketball / Thunder trade Perry Jones III to Celtics as Ainge picks up asset in salary dump 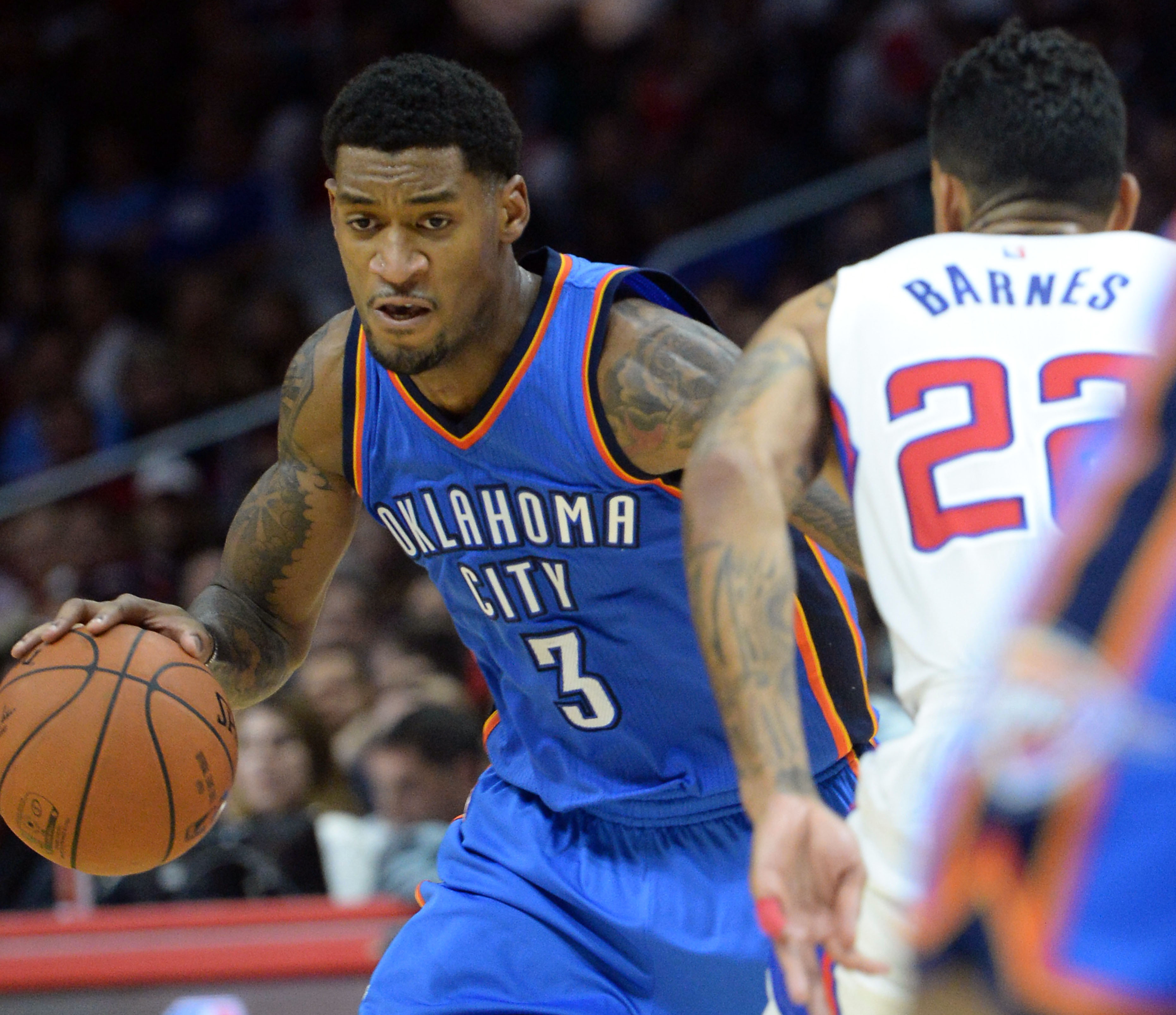 Danny Ainge hasn’t yet been able to use his massive war chest of future draft picks — as many as five additional first-round choices and six extra second-rounders over the next three years — to put together a package for a bona fide star. The Boston Celtics’ president of basketball operations continues to work around the margins, though, using one of his stockpile of future No. 2s to import former Baylor standout Perry Jones III from the Oklahoma City Thunder, according to Steve Bulpett of the Boston Herald.

In a practical sense, Ainge doesn’t actually even lose a second-rounder. The Celtics will also receive “cash considerations” and the Detroit Pistons’ 2019 second-round pick, which was sent to the Thunder back in February in the deal that sent point guard Reggie Jackson to the Motor City, according to Darnell Mayberry of the Oklahoman. Boston sends Oklahoma City a protected second-round pick in the 2018 draft, according to Gary Washburn of the Boston Globe; while the exact protections remain unclear, it could even be the kind of conditional pick designed to only change hands if it lands at the very end of Round 2.

The Thunder also walk away with “a trade exception of about $2.1 million,” according to Mayberry. From their perspective, the motivation is strictly financial.

The 23-year-old Jones, a 6-foot-11 forward whom Oklahoma City selected with the 28th pick in the 2012 NBA draft, is slated to make a shade under $2.04 million this season. After re-signing restricted free agents Enes Kanter (four years, $70 million) and Kyle Singler (five years, $25 million) this summer to go along with the eight-figure deals on the books for stars Kevin Durant, Russell Westbrook and Serge Ibaka, the Thunder are not only in line to pay the luxury tax, but facing quite a hefty tab due to the heavily punitive tax structure put in place in the 2011 collective bargaining agreement.

You can check out the nitty-gritty over at Larry Coon’s NBA Salary Cap FAQ, but the tl;dr version is that for every $5 million a team spends over the tax line, the tax rate increases, so the farther you go past the tax line, the more expensive each individual dollar spent becomes. Jettisoning Jones’ $2.04 million, then, creates much more significant savings for general manager Sam Presti and OKC’s ownership:

Trading Perry Jones to Boston will slice OKC’s overhang to $11-plus million over the luxury-tax line and cut their tax bill to $19.5 million

Or to further illustrate how punitive the modern NBA luxury tax is: OKC’s tax bill drops from $24.6M to $19.5M just by trading Perry Jones

Jones had reportedly been on the block for months. Yahoo Sports NBA columnist Adrian Wojnarowski reported before the February trade deadline that he’d been discussed as part of a package along with Jackson and center Kendrick Perkins that would have headed to the Brooklyn Nets in exchange for center Brook Lopez. Those talks broke down, with both teams moving on to new business. Oklahoma City shipped Jackson to the Detroit Pistons and Perkins (among other pieces, including a future first-round pick) to the Utah Jazz in a three-team deal that imported Kanter, Singler, point guard D.J. Augustin and shooter Steve Novak, while Brooklyn sent Kevin Garnett back to the Minnesota Timberwolves in exchange for power forward Thaddeus Young.

Jones’ name resurfaced as a potential trade option before the draft, with Sports Illustrated’s Chris Mannix reporting that the Thunder were shopping Jones, Novak and swingman Jeremy Lamb in a “financially motivated” move. Oklahoma City sent Lamb to the Charlotte Hornets several days later, bringing back the valuable unguaranteed contract of veteran point guard Luke Ridnour and a future second-round pick. Novak, who’s owed $3.75 million this season, could still be on the move if the Thunder can offload him for bupkis, but “a deal in that regard isn’t imminent,” according to ESPN.com’s Royce Young.

Moving Jones also opens up a spot on Oklahoma City’s roster, which Mayberry reports is expected to go to Josh Huestis, whom the Thunder somewhat surprisingly drafted with the No. 29 pick in the 2014 draft before making a dubious bit of history by parking him in the D-League for a season and making him the NBA’s first domestic draft-and-stash player. The 6-foot-7 Stanford product averaged 10.3 points, 5.7 rebounds and 1.1 assists in 33.1 minutes per game for the Oklahoma City Blue last season, shooting just 37.2 percent from the field and 31.6 percent from 3-point range in his developmental season; to what degree he’s ready to contribute at the NBA level remains very much an open question.

There’s a reason that a 6-foot-11 23-year-old whom Durant once called “the best athlete in the NBA” is being offloaded in a purely cost-cutting move, though. Jones has rarely lived up to the hype that surrounded him coming out of high school, where he was a top-10 prospect. He was considered a potential top-five draft pick after his freshman season at Baylor, but returned for his sophomore year, put up only marginally more impressive numbers while failing to answer questions about his motor and work ethic, and slipped to the bottom of the first round of the 2012 draft after being red-flagged with a knee issue.

Jones struggled to crack the rotation on a Thunder team that had Durant firmly entrenched at the three, logging just over 1,000 minutes in his first two pro seasons. When he did get chances, Jones tended to struggle to make a significant impact, seeming tentative and rarely leveraging the estimable physical gifts and inarguable talent that had him mentioned alongside the likes of Kyrie Irving and Harrison Barnes as a premier prep prospect.

He briefly burst out of that stasis early last season. With the Thunder reeling from injuries to Durant, Jackson, Lamb, first-round pick Mitch McGary, sharpshooter Anthony Morrow and, after less than two games, Westbrook, Brooks just about literally had nowhere else to turn. He needed someone to create offense, and Jones was up.

Called upon to be aggressive, Jones exploded for 32 points on 10-for-17 shooting, seven rebounds and three assists in 42 minutes in a loss to the Los Angeles Clippers; 20 points on 8-for-17 shooting, four rebounds, two assists and two steals in 41 minutes in a win over the Denver Nuggets; and 16 points on 6-for-12 shooting with four rebounds in a loss to the Brooklyn Nets. The three-game, 68-point run gave him nearly as many points as he’d scored in his entire rookie season (88) and nearly a third of his sophomore year total (216).

Then he got hurt, suffering a right knee contusion that kept him out for nearly a month. By the time he returned, so had Durant, again bumping him down a spot in the rotation. Before long, the brand of ineffective, barely-there play that had characterized much of his first two seasons returned, too, pushing Jones further down the bench, even after Durant’s injury woes multiplied; even as Oklahoma City continued to try to make a playoff push, Jones rarely saw action more meaningful than choreographed pre-game high-fives.

For Ainge, this is about as close to a no-risk proposition as it gets. He gives up only a heavily protected second-round pick two summers from now for a look-see at what wunderkind coach Brad Stevens might be able to do with a 23-year-old once thought to have high-lottery upside. And with the Thunder paying Jones’ freight and plenty of balance-sheet flexibility still retained by not yet having officially consummated their trade for David Lee and their re-signing of free-agent Jae Crowder …

Since BOS did not make the GSW trade or sign Crowder yet, Perry Jones is taken into cap space. Smart move by BOS to take advantage of space

… Boston doesn’t even have to feel too badly about walking away from Jones in training camp if he doesn’t look good enough to make the roster. And he might not, because as it stands, that Celtics roster’s looking awfully crowded:

Boston will be at 16 guaranteed contracts once Mickey signs, 17 if Pressey isn’t waived. Reasonable to expect more. pic.twitter.com/ppLpedOg2u

… which could mean more moves coming down the pike:

Unclear whether this Jones deal is start of something bigger. Source says the Celtics have “a lot of things in the cooker.”

Like we’d expect anything less from Trader Danny, forever trying to figure out how to turn a paper clip into a mansion.