You are here: Home / Basketball / Report: Dwyane Wade could be ready to leave the Miami Heat

Report: Dwyane Wade could be ready to leave the Miami Heat 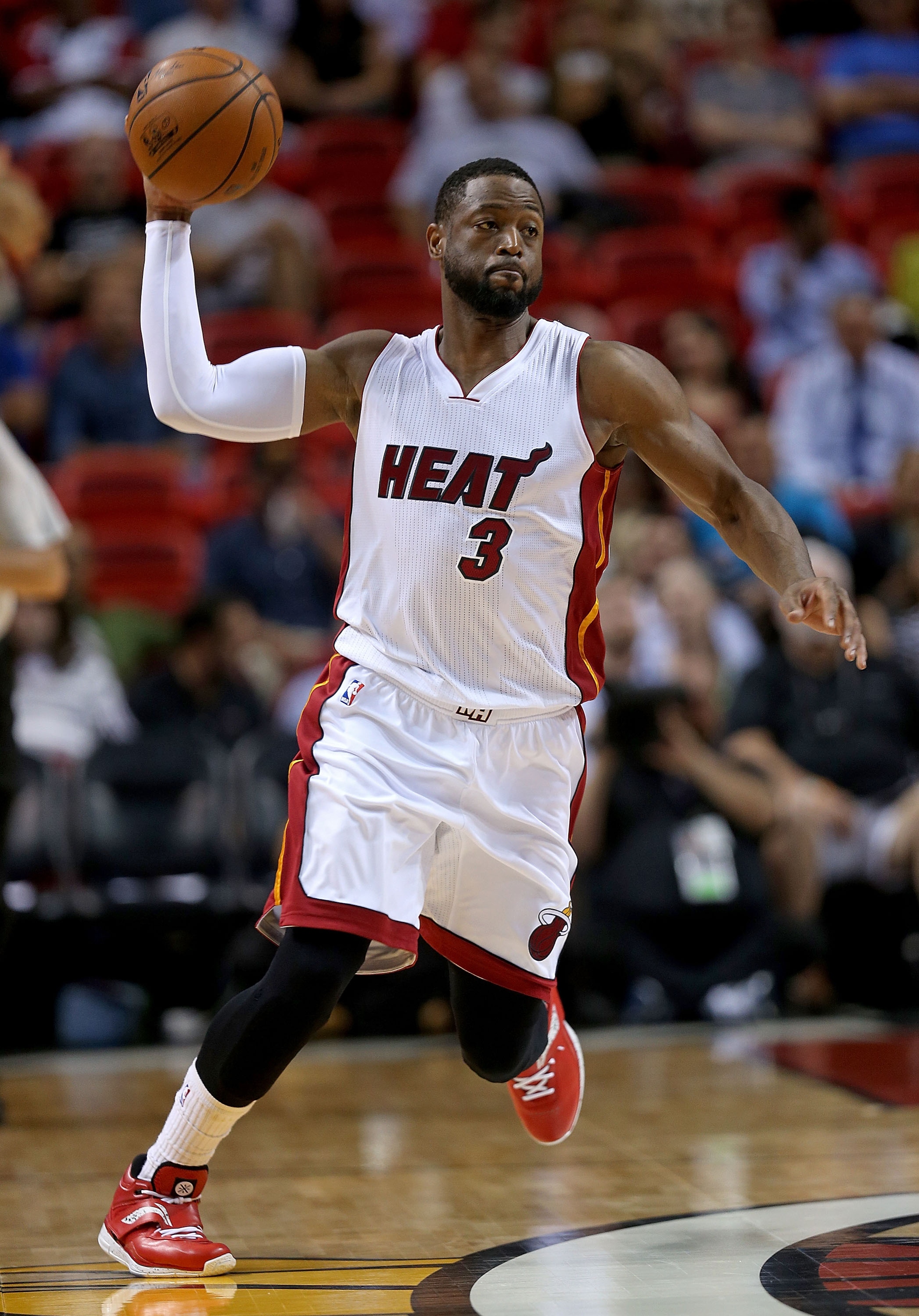 Few active NBA players are as associated with their franchises as Dwayne Wade is with the Miami Heat. Since they selected him with the fifth pick of the 2003 draft, the now 33-year-old future Hall of Famer has won three titles, made eight All-NBA teams, and generally been one of the best players in the league. Beyond those credentials, he has been quite loyal to the Heat (apart from taking a few meetings as a free agent in 2010, which is almost nothing) and seemed like the sort of player who could take on a larger role with the franchise after retirement if he chose to.

It’s a bit surprising, then, to learn that Wade could be on his way out of South Beach this summer. While Wade opted out of the final two seasons of his contract last summer (worth $41.6 million) to take a cheaper two-year deal (worth $31 million) that would help Miami add other players, the new agreement included an early termination option for this offseason. According to Barry Jackson of The Miami Herald, Wade is considering opting out and becoming a free agent if the Heat do not give him a bump in pay:

The Heat and Dwyane Wade have been discussing potential resolutions of his contract situation and there’s a significant difference in what both parties believe he should be paid for the next three seasons, according to multiple sources.

Though Wade prefers to stay with the Heat, where he has spent his entire 12-year career, he is now open to considering other teams this summer if the Heat does not raise its offer, according to three sources with direct knowledge. Wade must decide by late June whether to opt out of a contract that would pay him $16.1 million next season.

The Heat wants to keep him but believes that paying him what he’s seeking would dramatically reduce its flexibility to add additional players during the summers of 2016 and 2017. […]

Wade said last summer that he was curious to see what he could command in the summer of 2016, when the cap is expected to skyrocket from $67 million to $89 million. That led to the belief that Wade would opt-in this summer.

But according to associates, Wade wants to opt out this summer, with the hope that the Heat would give him a lucrative three-year deal that would extend past his 36th birthday.

That does not appear to be the Heat’s preference. The Heat apparently would be content with Wade opting in for next season, then re-signing for good, but not huge, money for another two seasons after that.

The news comes as a surprise, in part because Wade seemed to confirm he wouldn’t opt out just a few days after the end of the regular season, in which the Heat didn’t make the postseason for the first time since 2008. Nevertheless, this decision is his right, and if the Heat didn’t want him to do so they shouldn’t have given him the option in the first place.

It’s easy to understand both sides’ perspectives on the matter. Wade turns 34 years old in January, so his next contract will be his final lucrative one and possibly his last of any kind. In 2014-15, he played 62 games averaged 21.5 points on 47 percent shooting in 31.5 minutes per game, quite efficient numbers for a 21.4 PER and 34.7 usage rate. Those are good numbers that unfortunately indicate that Wade isn’t still capable of shouldering the load of a top-level superstar. Given that, it makes sense that he would want to make as much money as he can before his athleticism and health deteriorate even more. For that matter, Wade is a franchise icon who already makes substantially less than teammate Chris Bosh and would stand to earn less than trade-deadline addition Goran Dragic if he signs a desired five-year max-level extension this summer. After taking a backseat to LeBron and accepting a paycut last summer, it would make sense if Wade wants to stop serving as the Heat’s version of The Giving Tree.

On the other hand, the Heat have probably looked at the situation at large and realized that Wade is not a $20-million-per-season player in 2015. He is still a very good scorer, but his inability to develop a three-point shot — he went 28.4 percent from beyond the arc last season and has never done better than 31.7 percent — makes him an odd fit for this era without the elite athleticism to compensate. It wouldn’t be shocking if Wade earned $20 million on the open market just because there are desperate teams out there, but the Heat can stand to hold their position for now with several big-name players on the roster and the ability to maneuver to sign Kevin Durant or another star in the major free-agent summer of 2016.

We’re not even at the true end of the NBA season yet, so it’s perhaps a little early to declare that Wade and the Heat have reached an impasse. Both Jackson and Ira Winderman of the South Florida Sun Sentinel quote Wade’s agent Henry Thomas as stating that negotiations are at an early stage and that his client has many reasons to want to stay in Miami. Wade and the Heat have had a long, extremely successful history together and could still reach a deal that works for both sides.

Nevertheless, it’s worth keeping an eye on this situation and entertaining the idea that the most successful player in Miami Heat history could change uniforms this summer. While Kobe Bryant has been lucky enough to stay with the Los Angeles Lakers without giving up anything in salary, it’s possible to wonder if Tim Duncan would still be with the San Antonio Spurs (or at least seen the team continue to contend) if he hadn’t agreed to sign below-market contracts on several occasions. Seemingly perfect relationships can sour once the particulars stop making sense for both parties.