Mailbag: NFL owners maintain strength by sticking together – abc7news.com
Last week’s NFL owners meetings provided a reminder of the power of ownership in this sport.

New England Patriots owner Robert Kraft came to San Francisco steaming about the penalties imposed on his team for Deflategate. He considered suing the league. He had his lawyers create a website to challenge every item in the Wells report, which the NFL used as a basis for the punishment meted out to the Patriots and quarterback Tom Brady. But being around the owners changed Kraft’s tone.

He probably realized the owners he would be fighting in court were the ones who voted him into the league as an owner when he bought the Patriots 21 years ago. He probably spent a few minutes talking to Jerry Jones, whose Dallas Cowboys lost a total of $10 million of valuable cap room in 2012 and ’13 for somehow violating the salary cap in an uncapped year.

Kraft decided not to appeal the Patriots’ penalty of a $1 million fine and the loss of two draft picks.

The race for getting two NFL franchises into Los Angeles is starting to look like another example of how NFL owners operate. Most reporters came to San Francisco thinking Stan Kroenke held all the cards in building a stadium in Inglewood and then moving the Rams out of St. Louis.

One image adjusted that notion. On Monday night, reporters spotted Chargers owner Alex Spanos and Raiders owner Mark Davis having dinner with several owners who are on the relocation committee. High-level NFL execs were also at the table.

That informal meeting could set the stage for the Chargers and Raiders to move to a proposed stadium in Carson. As Kraft likely reminded himself, often the league sets itself above the individual desires of an owner or a franchise. If the Carson plan has strong support from NFL owners, it will happen.

It’s too early to handicap how the Los Angeles project will unfold. Spanos made it clear he wants to exhaust every effort for the city of San Diego to present a stadium proposal his family can accept. Unfortunately, the offer made by the city last week most likely falls short. While San Diego officials were making their pitch, Carson was closing on a land purchase for a two-team stadium.

There won’t be three teams in Los Angeles next year, because the NFL is going to give partial funding only for two teams in one stadium.

A Raiders/Chargers move to Carson gained plenty of momentum last week. Power-broking owners like the idea of helping Spanos and Davis if they can’t get stadium deals to stay where they are. While they aren’t totally against Kroenke, they recognize he is operating more on his own than with the league, although they also realize his work has put the league in a position to get pro football back in Los Angeles.

If the Carson deal makes the most sense financially, I can see owners approving a move to Los Angeles by the Chargers and Raiders and saying no to Kroenke. If that happens, though, the league would have to make things right for the Rams. First, it would have to make sure the St. Louis offer to keep the Rams is a great deal for Kroenke.

There may be some other things the owners could do to assist Kroenke. Kroenke owns sports franchises in Denver — the NBA’s Nuggets and the NHL’s Avalanche. If the Broncos ever wind up for sale — which could become a possibility with owner Pat Bowlen battling Alzheimer’s disease — the league could broker a deal that makes Kroenke the next Broncos owner.

On the football side, the league would need to fix the divisional alignments if the Raiders and Chargers move into one stadium. For network television purposes, the league can’t have to two AFC West teams in the same stadium. The Chargers or Raiders would have to move into the NFC West, and one NFC West team — the Rams or Arizona Cardinals — would have to switch to the AFC.

The next six months should be a study in how this fraternity of owners operates.

Q: There are any number of drafted NFL players who never play in games because they are low on the depth chart. For example, QB Landry Jones of the Steelers is listed behind Big Ben and Bruce Gradkowski. Thus, it is extremely unlikely that he will ever get to play. So, why are some fans and commentators so critical of team members who never get to showcase their skills? It seems at least unfair if not downright stupid.

A: What you have done is remind the NFL why it needs to get a developmental league as soon as possible. There are several drafted quarterbacks who play behind elite quarterbacks who don’t miss games. They simply fall through the cracks. A developmental league is extra important because more quarterbacks are coming out of spread offenses in which they don’t process plays as they would in the NFL. It’s one thing to work plays in practice, but it’s meaningless if you can’t run plays in games.

Q: I had a question/thought about the new extra point rule. The league wanted the degree of difficulty to be harder for kickers. Did they ever consider (or should they have considered) changing what the defense can do to block the kick? I remember last year when Kam Chancellor of the Seahawks jumped over the line to try blocking a kick, but it was waved off because that’s illegal. Why not let the defense do more things like that to help change the degree of difficulty?

A: I am sure special-teams coaches will come up with creative ways to attack the extra point from the 15. But there are concerns that the move could lead to more injuries. Some kickers who don’t like the change are raising those points. Extra points might have become an automatic play, but they didn’t lead to a lot of injuries because defenders didn’t rush as hard. If more players try to jump over the line as Chancellor did (he was flagged for running into the kicker, not for the leap itself, which was done legally), they might be more prone to injuries.

Q: It seems as if the NFLPA is trying to get through the back door what it couldn’t get through the front door — that being not having Roger Goodell hear appeals, discipline matters, etc. Basically, during the negotiations on the CBA, the NFLPA made a calculated decision to drop their insistence on a neutral hearing officer in order to obtaining other gains or to avoid giving up something else in lieu of that. Thus, they should have to live with that decision.

A: Even if the attempts to challenge Goodell might not work, it’s the union’s job to try. The commissioner’s power in these affairs has been around for three commissioners. The NFL feels strongly about the commissioner having that power, and no union leader has been able to change that. Still, if the union can chip away through court efforts, it can have minor victories. What choice does it have? This CBA lasts 10 years. Goodell has taken himself off some of the penalty-related cases. He’s been using more independent investigations. He’s formed new teams to make decisions. But he has the power, and that probably isn’t going to change.

Q: Doesn’t taking away draft picks from a franchise, such as with the Pats for Deflategate, hurt the NFLPA? They lose two drafted players, including a first-round pick.

A: It does hurt, but the NFLPA accepts there will be those possible penalties every year. The only way the NFLPA would put up a protest is if the count for a particular year would exceed five or six. I guess it’s safe to say that the loss of one or two draftees is more of a scratch than a major wound.

Q: Here’s a Deflategate conspiracy theory for you: Is it possible that Goodell already knew that tampering had occurred through his buddy-buddy relationship with Robert Kraft? As such, he ordered the Wells investigation knowing it would turn up a preponderance of the evidence, enough to warrant penalties and thus appeasing the anti-Patriots fans (myself included). Then, knowing Brady would appeal and Kraft would make a big stink about it, he appoints himself to hear the appeal so he can eliminate Brady’s suspension … at the same time, working behind the scenes with Kraft (as has been reported) to come to a mutual agreement on the team penalties. This way, it gives the appearance of him trying to get to the truth through and “independent” investigation.

A: That’s unlikely because I can’t see Goodell eliminating Brady’s suspension. He can shorten it to two or three games if Brady gives him new evidence to consider. Part of the four-game penalty against Brady is for noncooperation. Better cooperation could have cleaned up that issue. But the Wells report came to the conclusion — by Wells’ judgment of the evidence — that Brady violated NFL rules. Unless Goodell throws away the Wells report, he has to maintain some penalty. A couple of things will be interesting. Will Brady give Goodell more info? He might not if he plans to go to federal court. My read is that Brady wants to totally clear his name and have no suspension. That’s why I wonder whether he’d give up information knowing it wouldn’t wipe out the suspension.

Jason in Gardnerville, Nevada, wonders whetherRandy Gregory faces discipline for failing a drug test at the combine. There’s no discipline for the failed test in February, but it put Gregory into the NFL’s drug program. As a result, he’ll face discipline if he misses or fails future tests.

Victor in Missoula, Montana, wonders whether the NFL would do away with PSI testing of footballs. The NFL won’t do away with the rule because it has been in the books for decades for a reason. If a ball is underinflated too much, it gives an edge to the offensive player, particularly in cold weather.

Don in Waltham, Massachusetts, believes the NFL didn’t do its job before the AFC Championship Game by not telling the Patriots it was notified about the deflated footballs. Years ago, the commissioner mandated not to give pregame warnings in situations like that unless it had proof. The footballs tested properly before the game. 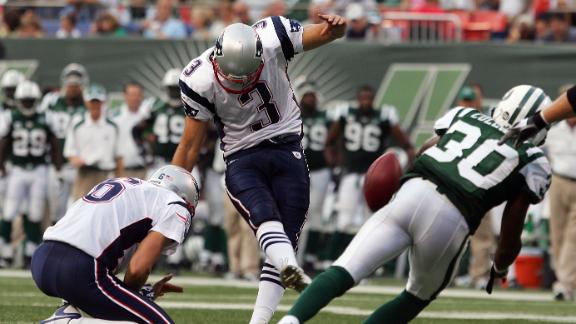 Inside The Huddle with John Clayton: Extra points, kickers and QBs 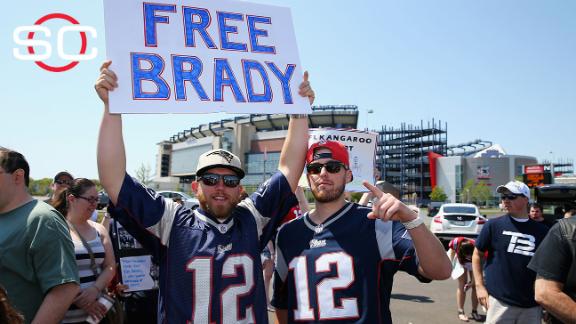 John Clayton has the latest on Tom Brady’s appeal and discusses Patriots’ fans rallying behind Brady outside at Gillette Stadium.