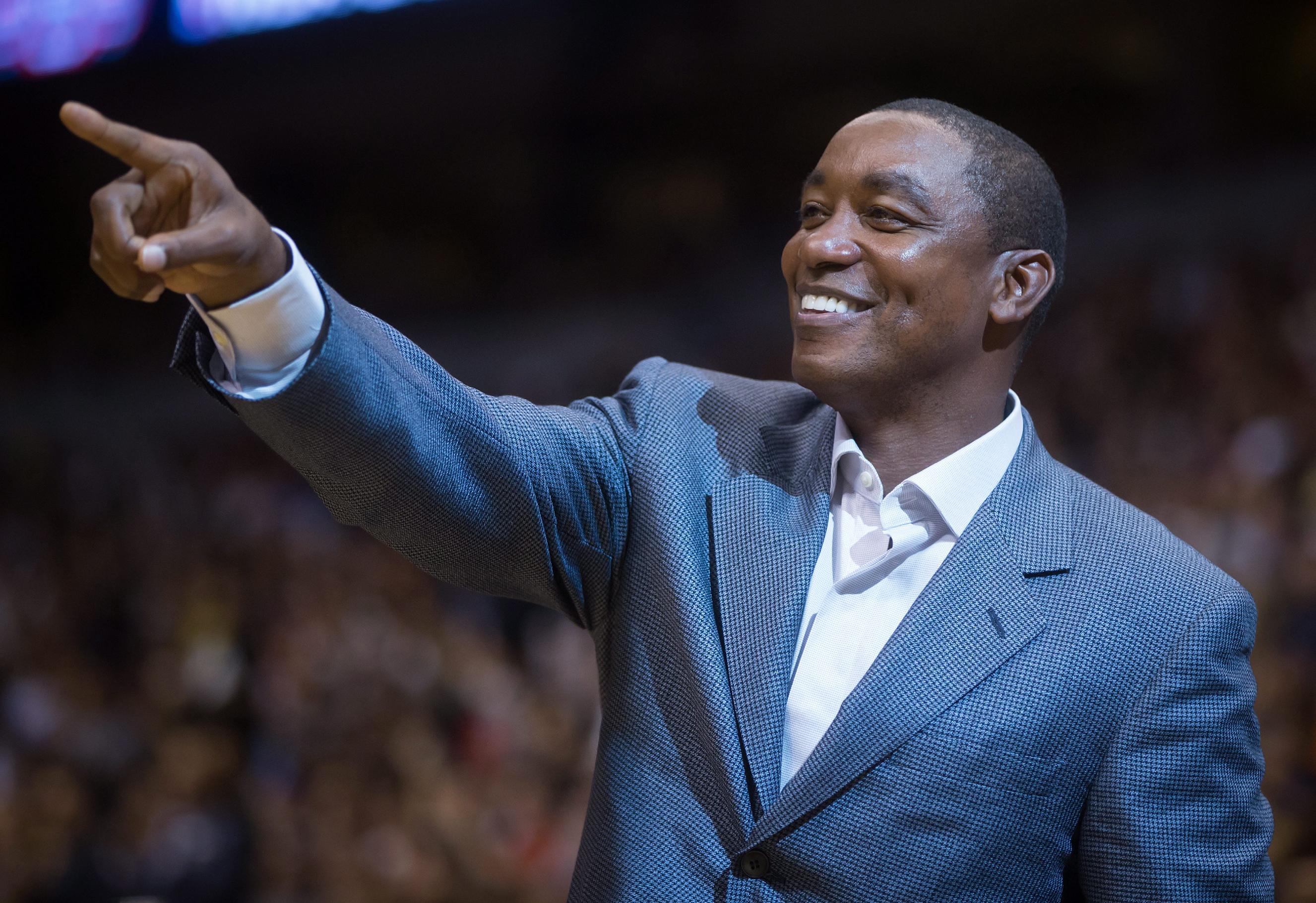 The union that represents WNBA players weighed in Thursday on James Dolan’s recent decision to hire Isiah Thomas as the new president of the New York Liberty.

The statement issued by Evie Goldstein, director of operations for the Women’s National Basketball Players Association, makes it clear that the controversial choice to employ Thomas as the leader of a women’s basketball team after being found by a jury to have created a hostile work environment and sexually harassed a female executive will be carefully scrutinized in the weeks and months to come.

The WNBPA and its members are aware of the 2007 verdict reached by a federal jury, after trial, that involved actions by Mr. Thomas and Mr. Dolan, and which found there to be a hostile work environment for women at Madison Square Garden (MSG).

WNBA players are aware that they have an impact both on and off the court. The WNBA is the premier women’s sports league in the world — its players represent the pinnacle of athletic prowess, are deeply vested in their local communities, and serve as role models for millions of boys and girls across the country. As such, we feel it is important to convey the message that WNBA players will not tolerate a hostile work environment, and that no one should have to endure unwanted sexual advances and harassment in the workplace.

The verdict finding there to be a hostile work environment at MSG was issued eight years ago, however. We recognize that people can learn, grow and evolve in that time frame, and that MSG, under Mr. Dolan, may now afford a hospitable, appropriate and non-discriminatory environment for its female employees.

As the union for all WNBPA players, we want to ensure that this remains the case and that Liberty players will not be subjected to the type of environment found to exist at MSG in the past.

Towards that end, we will have recurring meetings with the Liberty players throughout the season to provide a forum for any issues, complaints or concerns regarding the working environment at MSG. We will be hosting the first meeting prior to the start of the season.

Dolan named Thomas, a Hall of Fame basketball player with a not-quite-Hall-worthy résumé as a basketball executive, the Liberty’s new president on May 5. He also announced that Thomas, who previously served under Dolan in a disastrous 4 1/2-year tenure as president of basketball operations for (and, later, head coach of) the New York Knicks, would become a part-owner of the Liberty.

That arrangement, however, had not yet been approved by the league’s Board of Governors. Thomas reportedly filed the appropriate paperwork to assume an ownership stake in the team “in the past few days.”

A jury ruled in October 2007 that Thomas had sexually harassed former Knicks vice president of marketing and business operations Anucha Browne Sanders, and that the Madison Square Garden Corporation, led by Dolan, had improperly fired Sanders for complaining about Thomas’ unwanted advances. MSG was forced to pay $11.6 million in punitive damages in the case, during which Browne Sanders claimed that Thomas had referred to her as a “bitch” and a “ho.”

Thomas maintained his innocence after the case’s resolution despite the jury’s verdict. He denied having cursed at Browne Sanders, but said during a videotaped deposition that while “a white male calling a black female a bitch is highly offensive,” it was “not as much” if a black man said the same thing.

“I do make a distinction,” Thomas said.

In one sense, the WNBPA’s statement extends an olive branch. Goldstein’s “eight years ago, however” passage affords Thomas and Dolan, the executive chairman of the Madison Square Garden Company, which owns the Liberty, New York Knicks, New York Rangers and Madison Square Garden itself, quite a bit of consideration in the “learn, grow and evolve” department.

It might even be viewed as a charitable amount of leeway, given MSG’s remarkably huffy response to the negative reaction that greeted news of Thomas’ hire.

“We did not believe the allegations then and we don’t believe them now,” read the MSG statement. “We feel strongly that the jury improperly and unfairly held Isiah Thomas responsible for sordid allegations that were completely unrelated to him, and for which MSG bore responsibility. In fact, when given the opportunity, the jury did not find Isiah liable for punitive damages, confirming he did not act maliciously or in bad faith.”

Thomas, too, stuck with that line during a post-hire media tour.

“When the jury had an opportunity to fine, they fined Madison Square Garden,” he said during an interview on ESPN Radio’s “Mike and Mike.” “I was not liable or personally held for anything. The jury found no findings. Anyone who’s vetted this, has looked at it, has come out and found that — as the jury found — that there were no findings in terms of Isiah Thomas.”

This version of events was loudly contested by one of Browne Sanders’ lawyers:

@HowardBeck I was one of Anucha’s lawyers. The statement is preposterous. There was one holdout juror on punitive damages against Thomas.

Thomas was found liable for his own disgraceful conduct. That’s what the jury found. Anyone who says otherwise is wrong. @IanBegley

Thomas says the jury made no finding against him. Wrong. Here’s what the jury found. cc: @HowardBeck pic.twitter.com/vF5VRn8dQa

… and by multiple legal experts contacted by Michael Powell of the New York Times:

Six of the seven jurors wanted Thomas held financially responsible. He can thank a lone holdout for the fact that the damage was only to his reputation, and not to his bank account.

I spoke to three law professors Tuesday. All said that fact could not be remotely construed as clearing Thomas. Dolan, of course, declines to talk to his lawyers.

Anucha Browne (she has since dropped the Sanders) also issued a statement through her lawyer decrying attempts by Thomas and MSG to “re-write history” as “so far beyond what any truthful report could say that the record needs to be corrected.”

While the union’s statement offers Dolan and Thomas some benefit of the doubt, it also emphasizes that WNBPA officials will be keeping a very close eye on Thomas’ return to the Garden. You’d have to imagine that they’d be quick to escalate and perhaps publicize any complaints that arise in their regular meetings with Liberty players and personnel.

The union’s statement comes amid widespread skepticism and criticism surrounding Thomas’ entrance to the WNBA. Some have raised concerns about whether Dolan and Thomas have “done their gender work.” Others wonder what the hire says about how the NBA and WNBA view sexism and misognyny, and the message that it sends about the degree to which gender discrimination is viewed as more acceptable than racial or religious discrimination.

Connecticut Sun coach Anne Donovan, who spent two seasons as an assistant and later head coach of the Liberty, spoke out against Thomas’ hire on Wednesday, according to John Altavilla of the Hartford Courant:

“They [Madison Square Garden] obviously trust and respect [Thomas], have confidence in what he can do,” Donovan said. “That’s great. But we’re talking about someone who has been a part of a sexual harassment in the work environment issue.

“It’s tough to swallow that he’s going to be a part of the women’s team. I am so glad I’m not there [coaching]. I’ve thought about that every day [since the decision].” […]

“It would be hard for me to gear up and go to work every day and feel good about it,” Donovan said. “If I was the coach of that team, or any female [associated with it]. … I’m just glad it’s not me.”

It will be the Liberty’s players, though. Whether they feel the need to speak out about it remains to be seen, but if they do, it seems that their union will be listening.