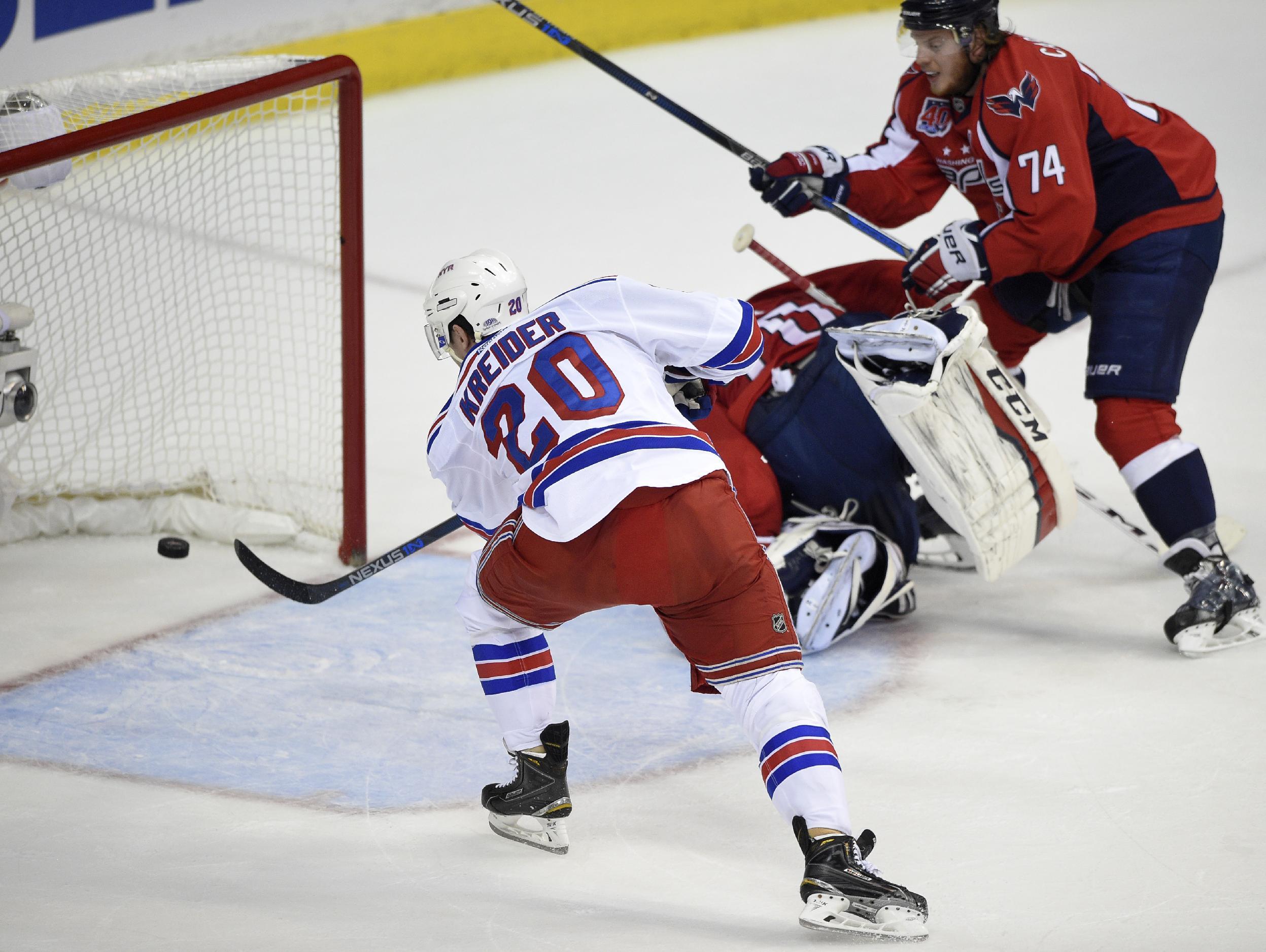 The New York Rangers were again at their best with their backs against the wall, and their Metro Division championship series against the Washington Capitals will have a Game 7 on Wednesday night in Manhattan.

Henrik Lundqvist made 42 saves and Chris Kreider had two goals in their 4-3 win in Washington on Sunday, holding off a furious Capitals rally in the third period to tie the series, 3-3.

“We wanted a chance. And we gave ourselves a chance,” said Rangers coach Alain Vigneault.

The Capitals attempted 96 shots in the game, 45 of them finding Lundqvist, but the all-world goalie survived elimination again. He moved to 13-3 since 2012 in elimination games, including Games 5 and 6 in this series.

Kreider opened and closed the first period with goals.

Kreider opened the scoring just 40 seconds into the game. The Capitals were on the forecheck when Jesper Fast cleared the puck to Kreider, streaking down the ice. He cut inside on Matt Niskanen, and controlled the puck with one hand on his stick. Braden Holtby dropped to his knees, but Kreider flipped it high past him into the net for the 1-0 lead.

With Troy Brouwer in the box for roughing Carl Hagelin at 19:56, Derick Stepan won a draw to Derick Brassard, who fired the puck at Holtby. He made the save, but the puck bounced off of John Carlson’s skate and back on him. Holtby kicked the puck to his right, assuming it was out of trouble. But Krieder was there an scored with 0.2 seconds left in the period for the 2-0 lead.

The Capitals made some adjustments in the second period, moving Joel Ward off the Alex Ovechkin line to help balance out the scoring, and it worked. Jason Chimera scored 28 seconds into the second after a spinning shot by Ward was partially saved by Lundqvist before Chimera tucked it by him.

The Capitals played a strong second, but Lundqvist was there. And then, in the third, two struggling Rangers broke through and almost put the game away.

Nash took a Martin St. Louis pass and slid past the usually dependable Nicklas Backstrom. He faked a shot, outwaited Braden Holtby and then tucked it by him for a 3-1 lead just 54 seconds into the third for only his second goal of the playoffs.

Then it was Dan Boyle’s turn to score his second of the postseason, as James Sheppard sent to puck back to the veteran D-man for a blast through Holtby, who was screened by his teammate Jay Beagle.

It was 4-1 Rangers when Evgeny Kutznetsov gave them new life with this fifth of the playoffs, on a broken play that saw three Capitals alone in front of Lundqvist.

Ward assisted on that goal; he scored his third of the playoffs just under three minutes later from Chimera and Carlson, tucking a puck that Lundqvist couldn’t cover behind him to make it a one-goal game, 4-3.

But that would be all they’d get, despite a late penalty called on Sheppard for putting the puck over the glass – a blown call, as he banked it off the glass. The Rangers played in their 11th one-goal game of the postseason.

Game 7 will mark the fourth time in five playoff matchups between the Capitals and Rangers that they’ve gone the distance since 2009.