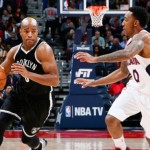 A healthy Derrick Rose drops 23 in Chicago's Game 1 win over Milwaukee CHICAGO – The Chicago Bulls are not the defensive team they once were. They’re also not the offensive team they once were. The Bulls can shoot now. Chicago downed the defensive-minded Milwaukee Bucks 103-91 in Game 1 of the first round of the Eastern Conference playoffs, in what was a surprisingly potent offensive affair. … END_OF_DOCUMENT_TOKEN_TO_BE_REPLACED 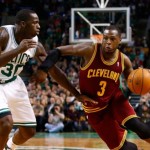 Boston Celtics Cleveland Cavaliers Free Pick and Betting Odds. The 53-29 Cleveland Cavaliers play host to the 40-42 Boston Celtics in this first of a 7 game playoff series at Quicken Loans Arena tonight April 19, 2015, tip off time is scheduled for 3:00PM EST. Wagering Odds Point Spread: Cleveland -11.5 O/U Total: 203 The Celtics are set to take on the Cavaliers tonight in the first … END_OF_DOCUMENT_TOKEN_TO_BE_REPLACED

Whiskey Ticket wins Illinois Derby (The Associated Press) Whiskey Ticket held off fast charging Conquest Curlinate by a nose Saturday to win the $400,000 Illinois Derby for 3-year-olds at Hawthorne Race Course. Ridden by Martin A. Pedroza, Whiskey Ticket ran 1 1/8 miles in 1:50.82 on the fast track and paid $6.40, $4 and $3.20 as the second choice in the eight-horse field. Whiskey Ticket … END_OF_DOCUMENT_TOKEN_TO_BE_REPLACED

Edmonton Oilers win NHL Draft lottery, chance to draft Connor McDavid The Edmonton Oilers won the Connor McDavid sweepstakes.  The Oilers’ card was pulled by NHL deputy commissioner Bill Daly, as a team with the third worst record and an 11.5-percent chance to win the lottery took the top spot and the chance to draft the OHL super prospect. “It’s going to affect your entire lineup, and … END_OF_DOCUMENT_TOKEN_TO_BE_REPLACED 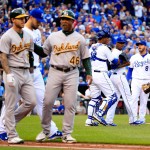 Royal Retaliation: Yordano Ventura ejected after beaning Brett Lawrie Your browser does not support iframes. The hostilities that developed between the Oakland A's and Kansas City Royals on Friday night spilled over into Saturday's rematch.   After serving up a two-run home run to Oakland's Josh Reddick, which capped an A's five-run fourth-inning rally, Kansas City right-hander Yordano … END_OF_DOCUMENT_TOKEN_TO_BE_REPLACED 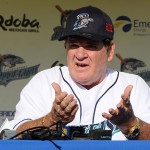 Fox Sports hires Pete Rose as studio analyst Pete Rose, 74, remains banned by Major League Baseball. But for how long? (USATSI) Pete Rose has a new job, and the work is so close to actually being in Major League Baseball that it seems right to wonder not when, but instead how soon he will be taken off the list of banned players. Rose, who recently petitioned commissioner Rob Manfred for … END_OF_DOCUMENT_TOKEN_TO_BE_REPLACED

Brian Shaw really did rap a scouting report to his former Denver Nuggets (Video) Brian Shaw tried, he really tried, to get through to the Denver Nuggets last year. The team started out well enough, moving toward an 18-20 record midway through January, but he also failed to establish an identity, he assumed “millenials” was to be used as a pejorative, and he reportedly rapped at his young … END_OF_DOCUMENT_TOKEN_TO_BE_REPLACED

Royals closer Greg Holland headed to DL with pectoral strain The Kansas City Royals are going to have to make do without closer Greg Holland for at least a couple weeks. Holland was placed on the 15-day DL on Saturday with a right pectoral strain, less than a day after pitching a scoreless ninth and picking up a save in Kansas City's 6-4 win over Oakland. Nothing from Holland's performance … END_OF_DOCUMENT_TOKEN_TO_BE_REPLACED