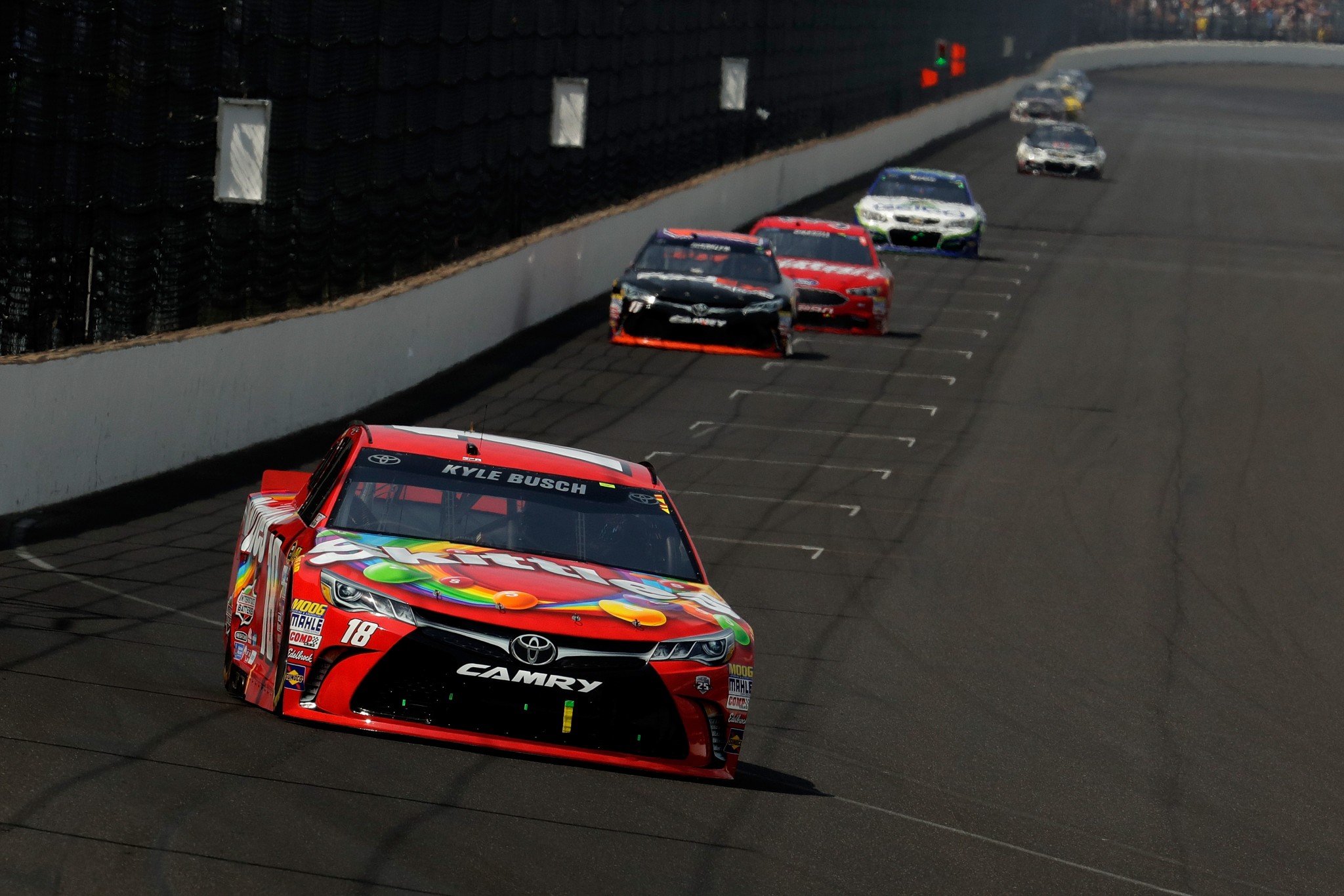 INDIANAPOLIS – There was no passing Kyle Busch on Sunday at Indianapolis Motor Speedway. And that’s not a hyperbolic statement either.

Busch started first and was never passed for the lead of the Brickyard 400 on the race track. Sure, he surrendered the lead at times, but that was because of pit stops and, at least early in the race, a pit strategy play by Team Penske. Straight up, no one had anything for Busch.

Though the end of the race certainly provided some challenges. Busch had to survive three restarts over the final 17 laps to ensure that he would win his second-straight Brickyard 400 and get his fourth-straight at Indianapolis. He’s won the last two Xfinity Series races at the track and won Saturday’s Xfinity race from the pole.

“This Toyota was awesome today, it was just so fast and able to get out front and stay out front,” Busch said. “Not even some of my teammates could challenge. This was hooked up and on rails.”

Busch led 149 of the race’s 170 laps. Thanks to three late crashes, the race was extended 10 laps (25 miles). It’s his fourth win of the season, which ties him with Brad Keselowski for the lead among Cup Series drivers. No other driver has more than two wins in 2016 and Busch also becomes the first driver to win Xfinity and Sprint Cup races from the pole in the same weekend.

“It’s so cool because it hasn’t been done before,” Busch said. “I’ve tried and been successful at being able to do a lot of things that others haven’t been able to do before. I guess I give myself more chances than others because I run more of those races. It helps you and when it helps you win on Sunday, that’s what makes everything so worthwhile on those Saturday races.”

Joey Logano and Brad Keselowski were the only drivers who led laps in Sunday’s race. Logano stayed out when most of the field pitted during a caution period for Greg Biffle’s crash on lap 54. Logano led six laps before Busch passed him for the lead.

Keselowski led laps 27 through 41 as he and Logano waited to pit while the rest of the field headed to pit road. But once Keselowski pitted, Busch had the lead again.

Busch also had to make sure he, along with many others, made it to the end of the race with enough fuel in the tank. Many of the drivers at the front of the field made it the final 47 laps at the 2.5-mile track since their final pit stop.

Tony Stewart, who is retiring at the end of the 2016 season, finished 11th while Jeff Gordon, subbing for Dale Earnhardt Jr., finished 13rd. Pit strategy almost worked out in Stewart’s favor late during the race as he was on pit road when a caution came out for David Ragan’s crash. However, Stewart was penalized for speeding on pit road and ultimately ended up losing a lap as a result of the penalty.