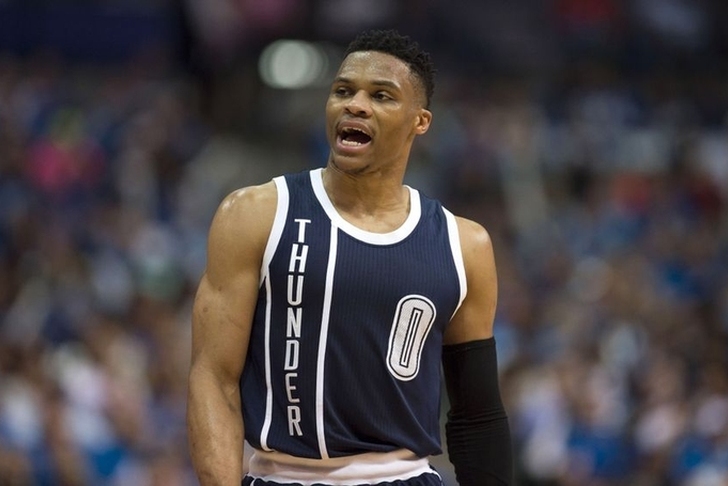 We’re now two weeks into NBA free agency and most of the big names have agreed to deals with teams, but there are still a few quality players available. There are also a few interesting trade rumors coming out of Summer League, specifically centered around the future of Russell Westbrook in Oklahoma City. Here are the latest NBA rumors and news from you need to know.

Westbrook staying in OKC?
Westbrook’s future is the biggest question mark in the league right now, and several teams – specifically the Boston Celtics – are hoping to acquire him in a trade. However, ESPN’s Chris Broussard reports that the Thunder are unlikely to deal him because he hasn’t told them that he wants to leave.

Who would you rather have leading your team in 2016?

Via The Oklahoman’s Erik Horne:

ESPN’s Chris Broussard said Friday that any talk of Boston moving to acquire Westbrook at this point is all speculation, particularly since Celtics general manager/president of basketball operations Danny Ainge “is one of the chief wheelers and dealers in the league.”

“On paper, they make sense as a team that could trade for a Blake Griffin or a Russell Westbrook,” Broussard said of the Celtics dealing for either of the two Western Conference stars. “… but at this point Westbrook has not given Oklahoma City any indication that he’s definitely out of there, or that he’s definitely staying.”

Westbrook hasn’t spoken publicly since his exit interview June 1, so it’s still unclear what his thoughts are about his future in Oklahoma City following Kevin Durant’s move to Golden State in free agency.

Oklahoma City is expected to trade Westbrook if he tells them that he will not re-sign with the team as a free agent next offseason. However, Westbrook has been very quiet about his future.

Celtics unwilling to trade Nets pick
Boston hasn’t been shy about their desire to use their assets to acquire a superstar in a trade, but they have some sticking points that have caused them from making a deal to this point. According to Steve Bulpett of the Boston Herald, the Celtics have been unwilling to give up their right to swap draft picks with the Nets next season.

Chicago was looking at that option when it held serious talks with the Celts prior to the draft about Jimmy Butler. According to agents with interest in the matter, the asking price for the 26-year-old scorer was very high, and the C’s got protective at a certain point.

The initial key for the Bulls was the third overall pick from last month’s draft and the ability to select Providence guard Kris Dunn. The aforementioned sources added that the Celtics were willing to add one player from their rotation when Chicago wanted a second.

“Another sticking point in that and in other deals Boston is talking about is that pick from the Nets next year,” said one of these sources. “Danny will make it available in the right situation, but he’s not going to give it up with core players, too. That’s going to be a good draft, and that’s going to be a high pick.”

In terms of other players in which the Celts are rumored to have interest, there have still been no recent talks regarding Blake Griffin or Russell Westbrook.

Brooklyn is projected to be one of the worst teams in the league again this season, giving Boston a high chance to get a top three pick for the second consecutive season. The 2017 draft class is also considered to be very strong with plenty of potential superstars at the top of the class.

LeBron James yet to notify #Cavs when he’ll sign not related to team’s ongoing dialogue with J.R. Smith, I’ve been told. James in no rush.

Cleveland also has to re-sign Smith, who is another unrestricted free agent. Like James, he is expected to be back with the Cavs as well.

Back to the NBA Newsfeed

This entry passed through the Full-Text RSS service – if this is your content and you’re reading it on someone else’s site, please read the FAQ at fivefilters.org/content-only/faq.php#publishers.
Recommended article from FiveFilters.org: Most Labour MPs in the UK Are Revolting.