Shutdown Corner is previewing all 32 teams as we get ready for the NFL season, counting down the teams one per day in reverse order of our initial 2016 power rankings. No. 1 will be revealed on Aug. 6, the day before the Hall of Fame Game kicks off the preseason. 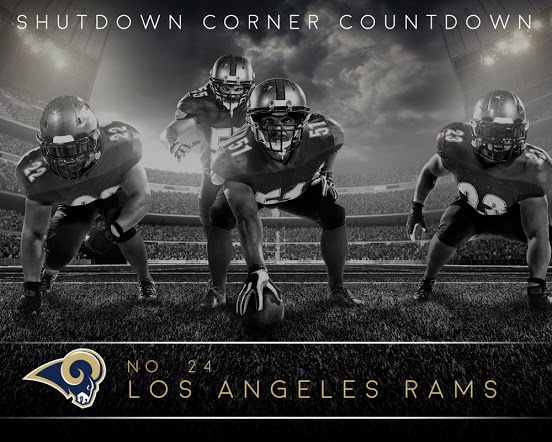 Southern California seems very excited to have the Los Angeles Rams back.

Well, here’s what you’re getting Los Angeles: A team that hasn’t been to the playoffs since 2004, annually fields one of the dullest offenses in the NFL, and has been stuck in mediocrity the last four years despite some outstanding talent but seemingly has no idea how to get out of that rut.

The Rams start a new era this season. There should be excitement for that, but it won’t be an easy transition. Everyone in the organization had to move from Missouri to California this offseason, and that could be a distraction. They are human after all, and it’s not easy to uproot your life like that. The team retained coach Jeff Fisher in part because he had been through a move before, during the Tennessee Titans’ relocation from Houston. That’s one of the craziest reasons I’ve ever heard for retaining a mediocre coach who can’t get his team to the next level, but I suppose things like that happen when you’re preoccupied with finding a new home for your team.

[Yahoo Fantasy Football is open for the 2016 season. Sign up now]

Running back Todd Gurley was a risky first-round pick for the Rams last year, coming off an ACL injury. The Rams eased him in early in the season because of the injury and then he exploded, finishing as the NFL’s offensive rookie of the year. Gurley, another year removed from injury, should be even better in 2016. He’s a future star.

Jared Goff is an even bigger piece of the Rams’ puzzle. Sick of watching guys like Nick Foles, Austin Davis and the perennially disappointing Sam Bradford play quarterback, the Rams went all in on Goff. They gave up a ton of draft picks to move up to No. 1 to take Goff. That’s a gamble and it will hurt the Rams’ depth in the future, but forget about the cost for a moment. If Goff finally gets the Rams out of their offensive hole — again, they haven’t had a top-20 finish in points scored or yards gained since 2006 — then the Rams can start to dream of better days ahead.

Los Angeles isn’t going to tolerate a 7-9 team very long, no matter how much patience ownership has shown with the coach who hasn’t gotten this team past that. There’s too much else to do there. Boring doesn’t play very well in L.A.

My reaction to every trade in which a team trades a billion picks to move up and take a quarterback: It’s risky, odds are it will ultimately do more harm than good, but if you land a franchise quarterback then who can complain? I don’t know if Jared Goff is the type of prospect you mortgage your future for, but it’s easy to see why the Rams’ brass gambled. No matter how much patience ownership has for Jeff Fisher and GM Les Snead now, it won’t last forever. A terrible first season in Los Angeles with Case Keenum at quarterback was probably going to cost Fisher and Snead their jobs, so the exorbitant cost to get Goff was either going to be worth it or be someone else’s problem anyway.

Losing defensive players like cornerback Janoris Jenkins, safety Rodney McLeod, linebacker James Laurinaitis, defensive tackle Nick Fairley and defensive end Chris Long isn’t a positive, but they retained cornerback Trumaine Johnson and got a quarterback. No matter how bad Goff is, he can’t be any worse than what the Rams had last season. Grade: C-

The Rams have a lot of talent, and a lot of it came from the draft haul in the Robert Griffin III trade (insert think-piece on the irony of the Rams’ trade for Jared Goff). We’ve been waiting on this team’s breakout for years. Maybe they just needed a change of scenery. Playing a lame-duck season in front of friends and neighbors in St. Louis’ dreary dome couldn’t have helped. With a fired-up L.A crowd (as fired up as any L.A. crowd can be), maybe they can finally break through that seven-win barrier. And if Jared Goff is just OK — basically a Jameis Winston/Marcus Mariota 2015 level player — then the Rams could significantly improve; last season the Rams were above average in practically every area except a putrid pass offense. Of course, that is usually the toughest area to improve.

I think most people agree that a head coach and quarterback are generally the two most important members of an NFL team. The Rams’ coach has six winning seasons in 20 full seasons as an NFL head coach, and the quarterback is a rookie whose college spread/shotgun offense has very little in common with the NFL offense he’ll run. So there’s that.

I’ll step aside here and let NFL Films’ Greg Cosell explain how he thinks Goff fits with the Rams, from our post-draft podcast:

“There’s no right or wrong here until we see how it plays out. But I think, with what the Rams want to do offensively in a run-first attack, it demands a quarterback play under center, demands a quarterback be good in the drop-back pass game and the play-action pass game. Also, when you’re a running team, your quarterback has to make run checks at the line or scrimmage based on the strength of the defense. You saw all that with [Carson] Wentz. Goff could do these things over time, but there are layers of learning for him because he was mostly a shotgun quarterback at Cal.

“Clearly, Goff has positive traits as a quarterback. He’s good in the pocket, he’s accurate, he’s got a compact delivery and he has a live arm (not a great arm, but a live arm). He’s smart and the Rams clearly feel over time he’ll learn the things he’ll need to do in the offense and be efficient. And when you start with the run game as a foundation, your reads are defined and that helps a quarterback. The run game sets up a lot, because the defense often has eight defenders in the box and uses coverages that aren’t as difficult to decipher in normal down-and-distance situations.”

Aaron Donald is one of the few players you could confidently pick to win defensive player of the year. Donald is a special player, practically unblockable at defensive tackle. End Robert Quinn is also very important, because he played just eight games last year and the Rams need him to be healthy. But we’ve seen how J.J. Watt can carry an entire Houston Texans team, and Donald has the ability to do that for the Rams.

Cosell: “They have invested a lot in the offensive line going back to Greg Robinson, the second pick of the draft of 2014, and he has not been a very good left tackle — and I think that’s being kind. There are times he doesn’t look like he belongs at left tackle. But they’ve really invested a lot in this O-line, so it’s something they really believe is critical to how they play. And it is, because they want to wear you out in the run game. Jared Goff is going to play in a totally different offense than he played in college. This won’t be a spread offense. This is going to be an offense in which they’re in base personnel, they want to run the ball, they want their pass game to work off that. You’ll see a lot of “max pro” concepts with seven-man pass protection. That’s the way they’re going to try to get the ball downfield.”

[Click here for Greg Cosell’s podcast previewing the Rams and the rest of the NFC West.]

From Yahoo’s Brandon Funston: “Although a reasonable case can be made that no Rams skill position player other than Todd Gurley needs be drafted in a standard 12-team Yahoo league, I think gadget wideout Tavon Austin will again be worthy of a roster spot.

“Austin, who is being drafted in just 55 percent of Yahoo default leagues, surprised with 10 touchdowns (five catches, four rushes and one punt return) in 2015. He may not be a great bet for anything more than half his TD total from last season, but a retooled offensive system could lead to a spike in overall touches. Coach Jeff Fisher even claimed he could “maybe double” his 52-catch total from last season. That’s probably a bit pie in the sky, but it does stand to reason that when the Rams aren’t running the ball (which they’ll do often), they’ll continue to employ Austin and his exceptional short-area quickness in a variety of ways (reverses, shallow crosses, screens, etc.). A sizable boost in touches in 2016 would help offset any touchdown decline, making Austin a strong candidate to finish as a top-40 fantasy receiver.”

[Yahoo Fantasy Football is open for the 2016 season. Sign up now]

The Rams return two pass catchers who had more than 250 yards last season, and both of them had fewer than 1,200 yards … combined. Kenny Britt had 681 receiving yards and Tavon Austin had 473. That’s it. A third member of the “over 250” club, Jared Cook, is in Green Bay now. The Rams have used pick after pick after pick trying to find a dynamic receiver for their passing game. They still don’t have one.

HOW WILL ALEC OGLETREE DO AT MIDDLE LINEBACKER?

I’m a big fan of Ogletree. He played weakside linebacker alongside Laurinaitis his first three seasons, and was extremely productive. With Laurinaitis in New Orleans, Ogletree takes over in the middle for the Rams. He has the size at 6-foot-2, 245 pounds to hold up at that spot and the range to stay on the field for three downs. Ogletree is back from a season-ending injury that limited him to four games last season, and I think he takes a major leap this season. He’ll make his first Pro Bowl.

Unless there are a lot of key injuries in Arizona or Seattle, it’s hard to figure out how the Rams could crack the top two of the NFC West. But they can still have a successful season. The Rams haven’t finished above .500 since 2003. A winning season and a run at a wild-card spot would be a step in the right direction, especially with a rookie quarterback.

If Goff looks overmatched, then what? The Rams tied their future to him when they traded all those picks to the Tennessee Titans. If Goff doesn’t at least show some positive signs, it means the endless cycle of terrible Rams offenses will likely continue with no end in sight. I would say that if Goff fails and the Rams regress then the team will start over with a new coach and general manager, but I’m not sure ownership is paying attention to the on-field product at this point.

The Rams are in a strange situation because they seem locked into third place in the NFC West. Not last, and not second or first. The Rams finishing third seems like the easiest bet of the season. Not every third-place finish is the same, however. For this third-place team though, I see another losing season with a rookie quarterback taking his lumps in a bad offense. What that would mean for the coach and front office, nobody knows.

Frank Schwab is the editor of Shutdown Corner on Yahoo Sports. Have a tip? Email him at [email protected] or follow him on Twitter!
Follow @YahooSchwab