You are here: Home / Baseball / A front-row seat to David Ortiz’s farewell tour

SAN FRANCISCO — There’s no missing David Ortiz. When Big Papi’s around, you know it, either by his booming voice, his contagious laugh or his larger-than-life presence. When he walks into the clubhouse or the dugout, you don’t see him, you feel him.

Such was the scene Tuesday at AT&T Park. Ortiz wasn’t even in the starting lineup, but he was still the star of the show. This, as you well know by now, is his final year in Major League Baseball and his farewell tour features all the pomp and circumstance you’d expect for a 20-year veteran who has hit 519 career homers.

He’s having a heckuva last hurrah too, leading the big leagues in RBIs and OPS. His 16 homers are tied for fifth in all of baseball. His Boston Red Sox are in first place and looking every bit like a playoff team.

It’s enough that any rational fan would say, “Big Papi, don’t hang up.” But as he told Yahoo Sports’ Jeff Passan recently, being 40 and putting up with the day-to-day rigors of baseball ain’t easy. His body hurts. His feet ache. That he’s been this successful at the plate is a testament to his mental prowess just as much as his physical ability

As Ortiz boomed around San Francisco this week, though, it was more a moment to appreciate his presence than his performance. He didn’t start either of the games against the Giants. Even in interleague play, there’s no DH at NL parks and the Red Sox aren’t putting him at first base in June when they’re eyeing a long postseason run.

He was in the dugout, during batting practice, meeting with fans from Boston who were in town for the game. He smiled and laughed and did his imitation of Barry Bonds and talked about what it’s like to hit homers into McCovey Cove. He made friends with everyone immediately, because that’s what he does.

When he was about to be whisked away to batting practice, Ortiz stopped in his tracks and asked: “Do I have a minute? I want to go sign.” And off he went, trotting toward an adoring group of fans who just a few minutes early had been chanting “Papi! Papi! Papi!”

Yep, this happens even in San Francisco, where the Red Sox rarely play. Red Sox fans are everywhere, of course, but the Giants fans were showing him love too. One shook Ortiz’s hand and thanked him for all he’d done for the game.

As Ortiz signed autographs, a young child a row behind the other autograph seekers yelled out, “Big Papi, I made this sign for you.” He did. It said “Farewell Big Papi” and had a #34 on it.

“I got you,” Ortiz said to the kid and maneuvered over to sign a baseball for him. 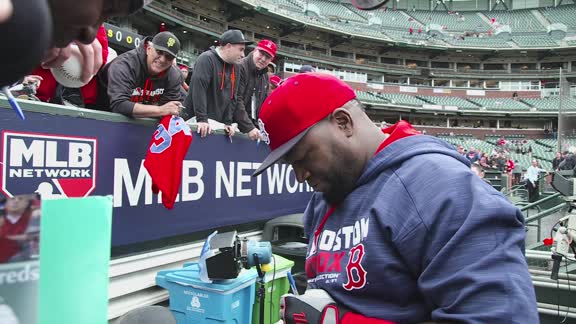 After signing a few more items, he grabbed his bat and went onto the field for batting practice, so he could launch a baseball where Bonds used to. When he did, he got a huge ovation. Because even Ortiz’s BP is met with huge ovations these days.

It’s in these moments that you realize what the game will be missing when Ortiz isn’t playing anymore. It’s not just about the home runs and the RBIs and the other eye-popping numbers.

It’s the presence. It’s the personality. It’s a star that big and that personable, who will meet a fan and, within five minutes, seem like his best friend. Baseball doesn’t have many players like that.

That’s not a knock on baseball’s young stars either. The fact is: The world doesn’t have many people like David Ortiz. He smiles and laughs and jokes so much that he’s either loving every minutes of his life these days or he deserves an Oscar for his acting.