You are here: Home / Baseball / 10 times Bryce Harper gave people a reason to hate him

10 times Bryce Harper gave people a reason to hate him

Namely getting ejected on Monday night, coming back onto the field a few minutes later while his team was celebrating a walk-off homer, yelling a certain F-word (not Fudgesicle) at the umpire, then getting fined and suspended on Wednesday. Harper appealed his punishment, but seemed to know it was coming and said he was sorry his mother had to see that.

The ordeal underscores the complicated relationship baseball fans have with Harper. At his best, he’s extremely talented, fun to watch and one of necessary faces of the next generation of MLB. But at his worst, it’s another story. He’s proven himself to have a temper and he has a history of showing up opponents. He’s said the wrong thing a few times too. Then there are perils that come with being anointed “the next big thing” as a teenager: Some people will hate you, no matter what, just because of all the attention. Just ask LeBron James.

[From Jeff Passan: If Bryce Harper wants to be baseball’s biggest star, he has some lessons to learn]

Winning the MVP, winning the rookie of the year, hitting 42 homers in a season or having a great playoff series are great accomplishments, but to some fans, those things aren’t as important as hustling down the line or showing the right degree of chill when hitting a game-tying homer in the postseason.

Harper, to his credit, hasn’t gotten in trouble much off the field. No arrests or DUIs. No headline-making party pics. Nothing like that. But in baseball, where the unwritten rules guide how a player is supposed to behave, his offenses might be just as bad. Harper isn’t really trying to please the old guard and, from day one, that’s made him the most offensive player in the game to some fans.

There have been many moments since then where he hasn’t helped himself either. So with that, we’re recounting the 10 times Bryce Harper gave people a reason to hate him:

1. He made the cover at Sports Illustrated at 16
We should start here for two reasons, because it’s where the Harper story starts and it’s where the Harper skeptics started to rally. Getting on the cover of Sports Illustrated at 16 and being labeled “The Chosen One” is quite an accomplishment — and a lot to live up to. Point is, being anointed puts you under a microscope and while this wasn’t Harper’s fault (it was, after all, a good thing) for certain people it’s the wrong kind of first impression. (Mike Oz)

2. He didn’t sign his contract with the Nats until the last minute
After being chosen No. 1 in the MLB draft in 2010, Harper and agent Scott Boras went the distance in the negotiating period with the Washington Nationals. The two sides agreed on a five-year, $9.9 million deal with 26 seconds left before the deadline, the Nats told ESPN at the time. Savvy negotiating or prima donna move? Depends on your perspective. (Oz)

3. He blew a kiss at a pitcher after homering off him in the minors
We’ve already established that people despised Harper before he even took the field for his first professional game. There was a chance that, if he took care of business on the field, people might respect his play. Harper’s career began without incident, but it didn’t take long before he was involved in his first controversy. After hitting a home run in a minor-league game, Harper was caught blowing a kiss at the pitcher as he rounded third base. The pitcher, Zachary Neal, reportedly was upset Harper admired the shot, and said something to Harper as he rounded the bases. The “kiss” was a response to that. Even though Harper may not have started the exchange, the damage was done. The people who hated Harper before he took an at-bat now had the ammunition to argue his attitude was going to be a problem on the field as well. (Chris Cwik)

4. He got benched for not running out a grounder to the pitcher
In April of 2014, a few week in to Matt Williams’ tenure as Nats manager, he chose to make an example out of Harper when the then-21-year-old didn’t hustle down the line after grounding out to the pitcher. He pulled Harper aside, benched him for the rest of the game and afterward, once Harper’s spot in the batting order had come up in a late rally, Williams told reporters it was “too bad for his teammates.” (Oz)

5. He made a lot of enemies in Atlanta for not “Respecting the A”
Harper managed to anger an entire fan base (not a new thing for him), after it appeared he intentionally scraped his foot across the Braves “A” logo as he was coming to bat during the 2014 season. Harper denied his actions, saying he has no idea what he does when he comes up to bat. The Braves Twitter account seemed to disagree, tweeting out “#RespectTheA” shortly after video of the incident emerged. Between that and all the dingers, Harper still isn’t well liked in Atlanta. (Cwik)

6. He yelled at a Giants pitcher after hitting one into McCovey Cove
In the 2014 NLDS, Harper and Giants relief pitcher Hunter Strickland had a small beef in which Harper twice got the best of Strickland. He homered in Game 1 off Strickland, then in Game 4 hit a huge tater into McCovey Cove that tied the game at two in the seventh inning. Harper glared at Strickland, who had said something to him as he rounded the bases, then began to yell at him from the dugout. (Oz)

7. He was voted the most overrated player by his peers
Prior to 2015, Harper’s colleagues were as sick of him as an Internet comment section. He was voted MLB’s “most overrated player” by his peers in a poll for ESPN The Magazine. To that point, Harper was seen as a disappointment on the field. Though his numbers were decent, especially considering his age, he wasn’t an MVP candidate yet, and that’s what everyone expected from the guy who graced the cover of Sports Illustrated at 16.

Despite the fact that he wasn’t one of the top five players in the game just yet, Harper still received the attention and endorsements fit for a star player. Other guys around the league didn’t seem too impressed, and Harper led the poll with 41 percent of the vote. He would prove all of them wrong once the season started, hitting .330/.460/.649, with 42 home runs. That performance helped him take home his first National League MVP award, and probably quieted some of the doubters … at least, briefly. (Cwik)

8. He dug himself a huge hole with the “Where’s my ring?” comment
Everyone loved the Nationals coming into the 2015 season, and that was before the club signed Max Scherzer to a $210 million deal. With Scherzer in tow, the Nats couldn’t lose. Harper expressed that sentiment by jokingly saying, “Where’s my ring?” when asked about the acquisition. That didn’t go over well. Though Harper was expressing confidence in his team, people interpreted it as a young player acting cocky and getting ahead of himself. He found that out the hard way, as the Nationals failed to even make the playoffs a few months later. (Cwik) 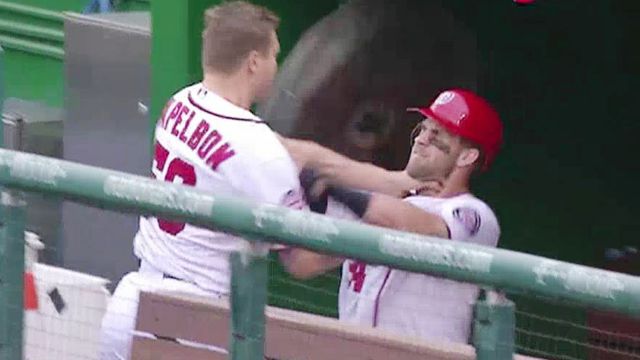 9. He got choked in the dugout by Jonathan Papelbon after another “hustling” moment
We all know the most famous on-the-field problem of Harper’s career. It came last season when he exchanged words with Nats closer Jonathan Papelbon and Papelbon choked him in the dugout. It should be noted that Papelbon is something of a loose cannon, so this can’t all fall on Harper. But Papelbon was apparently upset that Harper didn’t run fast enough on a flyout. Harper did, however, reach first base. The upshot of it all? Both were suspended. Williams, who was fired shortly thereafter as manager, admitted he didn’t even know it had happened. And both players will probably never live down that moment, no matter what happens from here. (Oz)

10. He was ejected, swore at an ump and eventually suspended
Harper’s most recent kerfuffle took place Monday against the Detroit Tigers. Harper was ejected from the dugout in the ninth inning after umpire Brian Knight believed he criticized a call. Harper wanted to argue with Knight, but was restrained by coaches. He was able to get his point across eventually, though. Clint Robinson hit a walk-off home run two pitches later. Instead of leaving the game, Harper ran back on the field during the celebration, pointed at Knight and appeared to yell “[expletive] you.” He was fined and suspended one game for his actions. (Cwik)