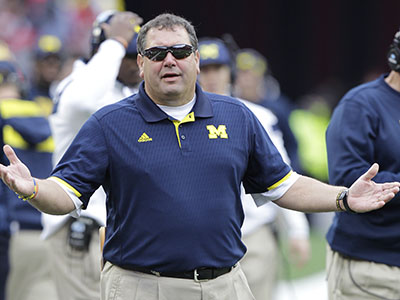 Former Michigan coach Brady Hoke said on his SiriusXM College Sports radio show this week that he would not have punted at the end of the Michigan-Michigan State game.

Hoke said he would have run another offensive play on fourth down and then left the fate of the game in the hands of his capable defense.

Michigan lost after punter Blake O’Neill fumbled the snap and then had his punt blocked by the Michigan State defense with 10 seconds remaining. Michigan State’s Jalen Watts-Jackson scooped up the ball and ran it 38 yards for the game-winning score.

Hoke explained that while Harbaugh probably had a good reason to punt, there were just too many potential pitfalls in that situation.

“No. 1, I think the one gunner to the field should have been in a little bit more and if you’re going to punt it there’s ways to protect it a little better,” Hoke said.

Hoke admitted that it was easier to look at the play in hindsight instead of in the moment.

“Look, I know it’s easy from where we sit right now,” Hoke said. “I’ve been on the sideline and had to make decisions. I went for two against Ohio State two years ago because Devin Gardner has a broken foot and didn’t think the defense was playing as well we needed.”

Hoke was 31-20 at Michigan and 18-14 in Big Ten play. The Wolverines went 11-2 in his first season, but didn’t have more than eight wins in any season after that. The wolverines went 5-7 before Hoke was fired.