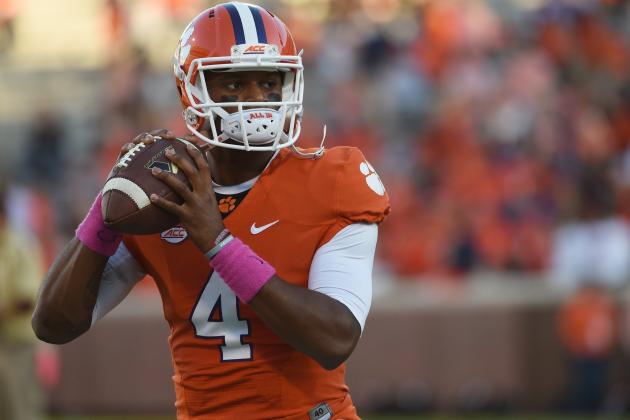 Oh, what a difference a week makes. While Week 7 of the college football season offered up some great games—and one of the most unlikely endings ever—this week’s slate of action leaves a little something to be desired.

There is only one matchup between teams both ranked in the Top 25, and while the rest of the slate could be competitive, we aren’t likely to see any major upsets. Regardless, that’s why they play the games. Here’s hoping these five contests can produce the same kind of drama as last week.

The marquee game of the slate is an SEC tilt between two teams looking to regroup. Ole Miss, after leaving the Liberty Bowl in Memphis with a surprising loss, hosts Texas A&M at The Grove. Similarly, the Aggies, after being on the receiving end of a beatdown from Alabama last week, will try to stay in the hunt for the SEC West title. Kyle Allen’s three pick-sixes against the Tide spelled doom, and Ole Miss’s feisty secondary will be in the mood to show it’s much better than it played last week. This should be an intriguing game in Oxford.

Elsewhere in the SEC, Alabama hosts Tennessee. In a rivalry game that has lost a bit of luster recently, the Vols hope to keep the momentum going from their upset of Georgia two weeks ago. Quarterback Joshua Dobbs was the catalyst for the Vols offense that day and must do the same against a Bama defense that is starting to show signs of being a dominant unit once again.

In the ACC, sixth-ranked Clemson heads to Miami to face the Hurricanes. This is the first of two straight road games for the Tigers—the other next week at NC State—before a possible undefeated showdown with Florida State. Miami has a good quarterback and playmakers on offense and could shock the Tigers if they lose focus. But Clemson’s offense is also starting to round into form, and its defense is one of the best in the country.

A month ago, Texas Tech came within one play of knocking off TCU in Fort Worth. This week, the Red Raiders hope to close the deal and pull off an upset as they head to Memorial Stadium to face the Oklahoma Sooners. The Red Raiders’ high-powered offense looks to keep it rolling against the Sooners, who put together their best performance on both sides of the ball in a 55-0 drubbing of Kansas State in Manhattan. The scoreboard operator will be on high alert in this one.

Out West, the best game on the Pac-12 schedule sees Utah visit USC. The Utes, led by a swarming D and hard-nosed running back Devontae Booker, face a tough challenge against a resurgent Trojans squad. The Utes will look to remain unbeaten and keep their playoff hopes alive. Meanwhile, after a week of turmoil, the Trojans came out and played well in a tough environment during a 41-31 loss to Notre Dame. They’ve responded and will look to not only spoil Utah’s run, but also try to salvage this season with an improbable Pac-12 South title. 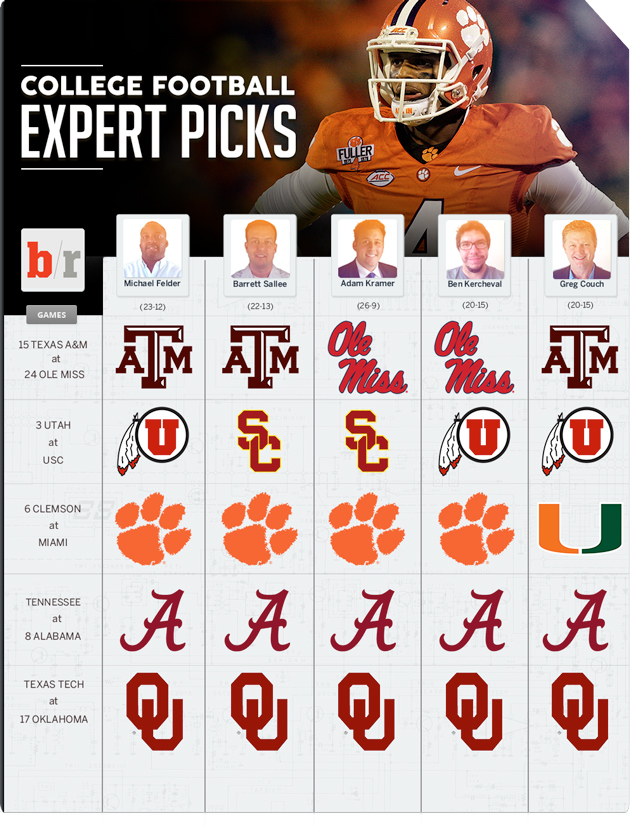 Lead Writer Adam Kramer continues to hold a small lead among our group of experts in the standings going into Week 8. Be sure to hit up the comments section with your thoughts on these games, and your picks as well.