It was an offseason full of emojis for the Mavericks.

There were, of course, the planes, helicopters and automobiles from The Great Emoji War of 2015, when DeAndre Jordain reneged on his max contract agreement and rejoined the Clippers on the eve of the NBA’s moratorium. That sent Mark Cuban & Co. scrambling to “replace” a First Team All-Defensive center, acquiring Zaza Pachulia, Samuel Dalembert and JaVale McGee while embodying a gritted teeth emoji.

There was an astonished face emoji after the Mavs signed Wes Matthews to a four-year, $70 million deal four months after he underwent surgery on his torn left Achilles tendon.

There was a shoulder shrug once Cuban replaced recently acquired and quickly renounced Rajon Rondo with currently injured Deron Williams at half the price — a reasonable swap in both a theoretical 2010 and the reality of 2015 for vastly different reasons.

Mark Cuban on Mavs: “I never make predictions, but I think we can be better than we were last year of we’re healthy.”

Is there a half-cry, half-laugh emoji? That would sum up Cuban’s assumption that his team can win more than 50 games “if we’re healthy,” since the Mavericks began the preseason with much-maligned point guard Raymond Felton, off-and-on D-League guard John Jenkins, rookie wing Justin Anderson and journeyman forward Charlie Villanueva filling out a starting lineup in place of the hobbled Williams (calf), Matthews (Achilles), Parsons (microfracture surgery) and Nowitzki (37 years old).

Where once the Mavs traded in a one-time Defensive Player of the Year (Tyson Chandler) for a potential future DPOY (Jordan) and upgraded from Monta Ellis’ streaky production to Matthews’ efficient two-way contribution, they’re now patching a defense that ranked 18th in points allowed per 100 possessions with aging former All-Stars and a rehabbed supporting cast. There’s an emoji for that, too.

In theory, Matthews remains an upgrade over Ellis “if we’re healthy”; the bizarre three-headed center monster of Pachulia (for a second-round pick), Dalembert (for the veteran minimum) and McGee (on a non-guaranteed deal) isn’t the worst way to salvage the Jordan situation, so long as they don’t respectively miss 20-plus games for the fourth time in five years, warrant another outright release and Shaqt a fool; and a motivated Williams at $5.4 million is just as good as a frustrated Rondo at $10 million. In theory.

In reality, the Mavs were a .500 team after the All-Star break and were lucky to avoid a first-round sweep by the Houston Rockets in the playoffs. They haven’t done much to immediately upgrade the starting lineup, and they lost arguably their most effective bench player (Al-Farouq Aminu) to free agency, replacing him with Jeremy Evans, who couldn’t crack the rotation in Utah after five seasons with the Jazz. 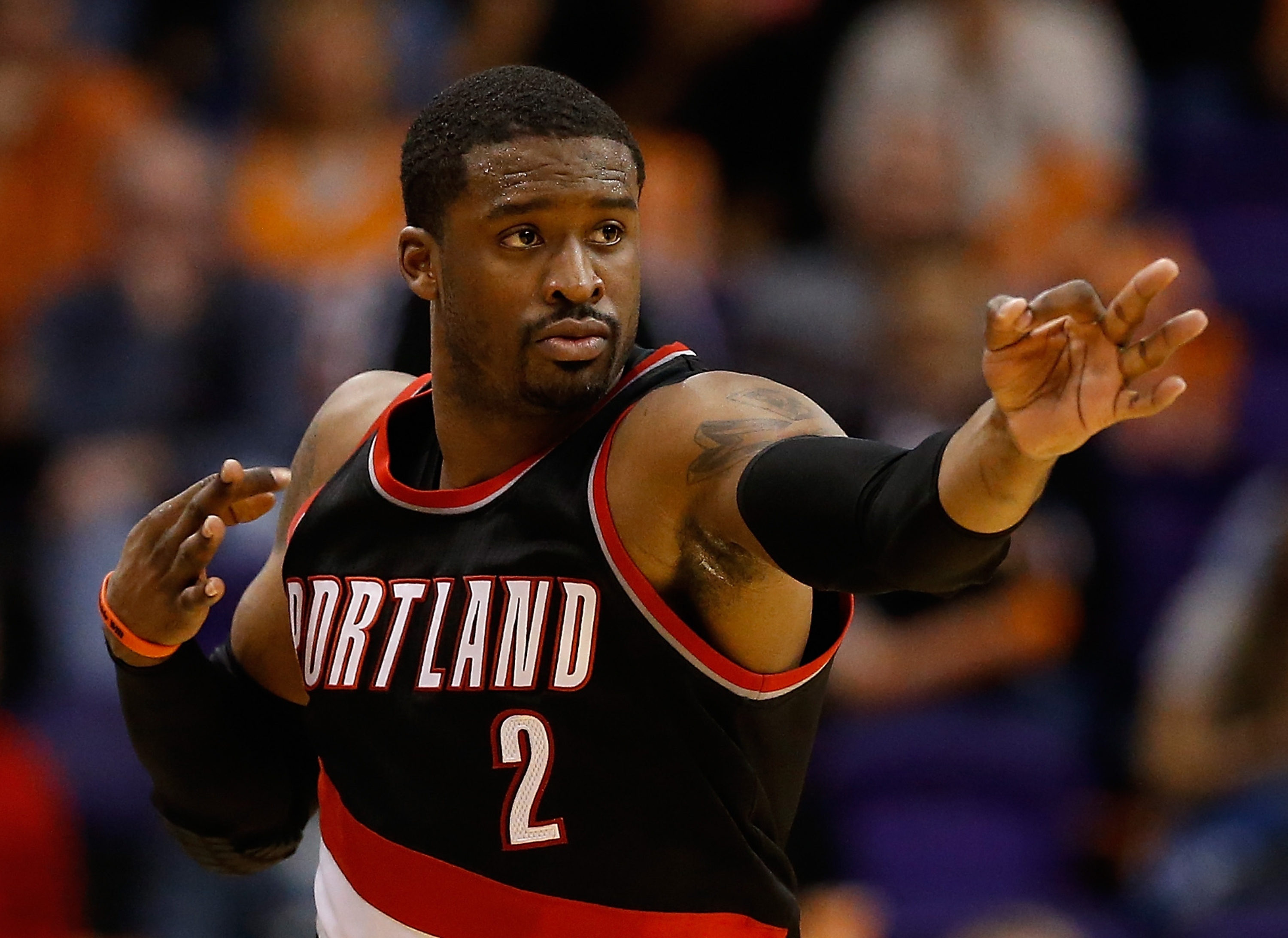 Matthews may one day prove worthy of his average annual salary of $17.5 million over the next four years, but while he originally planned on being ready for opening night, he only returned to 5-on-5 practice work last week. The list of NBA players who successfully recovered from a ruptured Achilles tendon is not a long one, mostly because of the age (in years) and age (in era) when they suffered the injury.

But Matthews is still just 29 years old with fewer than six NBA seasons on his treads, and he’s rehabbing in a time when Adrian Peterson can embark on an NFL MVP campaign nine months after ACL surgery. So, there is hope yet Matthews can return to the form that had him knocking down 200-plus 3-pointers at a near 40 percent clip while playing lockdown wing defense for a 50-win team in Portland.

There are defensive woes, and then there are the defensive woes of an aging and aching roster. Nowitzki is a surefire Hall of Famer, but he’s never been known as a stout defender, and at age 37 he’s a liability on that end. The Mavs’ most used lineup with Nowitzki last season allowed 106.7 points per 100 possessions, which would have ranked as the league’s fourth-worst defensive rating if averaged over a full season.

That lineup also featured Chandler and Rondo, who share seven All-Defensive bids between them, even if Rondo didn’t play defense “in years” on the Boston Celtics.

Pachulia and Dalembert combined to hold opponents to 49.1 percent shooting on 11.6 field goal attempts at the rim per game in New York and Milwaukee last season, surprisingly slightly better than Chandler (50.9 percent on 9.5 FGA) and only marginally worse than Jordan (48.5 percent on 8.7 FGA). And Brooklyn’s defense has actually been better with Williams on the floor each of the past two years. If paper translates to parquet, Dallas might be OK on the defensive end, but stats don’t always tell the story.

Who knows what might have happened had Williams signed the four-year, $75 million deal Dallas offered in free agency a year after the Mavs won the 2011 title, but we can be sure the contract he signed for $20 million and one season more with the Nets in 2012 was an unmitigated disaster. His player efficiency rating fell each season from 2012-15, and he never approached his All-Star status again, ultimately earning a $25 million buyout to not play in Brooklyn for the next two years.

He turned around and signed a two-year, $11 million deal in Dallas three seasons after spurning his hometown team. Not so bad for a 31-year-old with a history of wrist, rib, calf, ankle and knee issues in recent years. Even more remarkable, there’s a chance Williams could decline his player option for 2016-17 and seek a raise next summer, when the salary cap soars, if he puts together a decent year in Dallas.

While Brooklyn has developed a reputation for putting veterans out to pasture lately, the Mavericks have a recent history of successful reclamation projects, so there’s at least the possibility Williams could enjoy a comeback season in 2015-16.

Anderson was one of a ton of prospects projected to go in the teens of the 2015 draft, but fell to the Mavericks at No. 21 overall, if only because it took three seasons at Virginia for his offensive game to catch up with his NBA-ready defensive talent.

After shooting just 29.8 percent from 3-point range during his freshman and sophomore seasons, Anderson connected on 45.2 percent of his 104 attempts as a junior this past year — all while anchoring one of the nation’s best defenses with a wingspan that approaches 7 feet and a build that would make Ben Wallace proud.

[The BDL 25: The key storylines to watch this NBA season]

Anderson’s performance in summer league — when he averaged 17.5 points (57.2 true shooting percentage), 4.2 rebounds, 1.5 assists and 1.2 steals over 31.8 minutes in six games — probably left a few teams wishing they had drafted him in the teens and may have helped Dallas forget they gave Jae Crowder away in the Rondo deal.

If Matthews and Parsons return to form from their surgeries before it’s too late this season; if Pachulia and Dalembert combine to make one effective center; if Nowitzki and Williams defy father time; if Anderson breathes life into a bench that features veterans Villanueva, Felton and J.J. Barea; and if Carlisle forges a defense out of that smoldering fire; then, the Mavericks should be back in the crowded Western Conference mix for a seventh or eighth seed and a brutal first-round matchup. Joy.

Don’t rule out a complete meltdown in Dallas, either. When Jordan agreed to a deal with Dallas, Cuban essentially conceded he would’ve tanked the 2015-16 season had he not landed a big-name free agent, and a week later the 7-footer was back in L.A. Here’s what the Mavericks owner told a radio station on July 3:

Because I think there’s only going to be two, maybe three teams in that race to the bottom, we said, “OK, this could be our David Robinson year” and we go out and get someone who we think we can develop and who is supposed to be an impact player and we take our lumps, we have lots of cap room and we do lots of trades to add lots of draft picks. Because draft picks, the way the cap is going, is only going to increase in value significantly.

Well, the Mavs only get their first-round pick if it falls in the top seven, since they dealt a protected first-round pick along with Crowder to Boston. Obviously, Cuban understands the significance of losing out on that pick, especially if they’re about to miss the playoffs and land in the 8-14 range of the draft. If Dallas doesn’t come out of the gate quick, the Mavericks’ aging and aching roster could see a lot of DNP-rests in hopes of running it back with a healthy Matthews, Parsons and a top-five pick in 2016-17.