(The 2015-16 NHL season is nearly upon us! Why bother watching this team? What will make or break the season? Find out as we preview all 30 teams as camps begin!)

Did They Get Better, Worse Or Are They About The Same?

Better. Adding 22-year-old defenseman Dougie Hamilton, after his contract stalemate with the Boston Bruinsm was genius. He’s coming off a 42-point season, has tremendous upside, and joins a defense corps where he won’t necessarily have to shoulder the toughest defensive assignments with the Flames.

The addition of Michael Frolik gives the Flames a jack-of-all-trades forward who specializes in penalty killing. And for a young team just getting on track for playoff success, having a role player with a Stanley Cup ring can only help.

Monahan kicked the sophomore jinx in its stupid face with a 31-goal, 31-assist effort in 81 games last season as a 20-year-old. Seeing what he does for a follow-up will be fascinating. And “fascinating” and “Sean Monahan” don’t often go hand-in-hand, as one infamous Twitter feed reminds us from time to time.

[Yahoo Fantasy Hockey: Sign up for a league today]

Well, of course we all predicted that Jiri Hudler, who had never cracked 60 points in a season, would post 31 goals and 45 assists with the Flames last season with a plus-17 at 31 years old. The 158 shots, his career best, certainly helped, as did the 19.6 (!) shooting percentage. Is there any way he hits or surpasses those numbers?

After Monahan and Johnny “Hockey” Gaudreau (64 points), the next young stud player for the Flames. The center might be shifted to wing this season out of necessity, but the fourth overall pick in 2014 – who draws comparisons to Doug Gilmour – could make an impact this season.

So what do the Flames do with Hiller? He was the starting goalie last season – 26-19-4 with a 2.36 goals-against average and .918 save percentage in 52 games – but lost the net to Karri Ramo for the playoffs. They’re both pending UFAs and prospect Joni Ortio is also holding a one-way contract. Something has to give; will it be Hiller who moves? 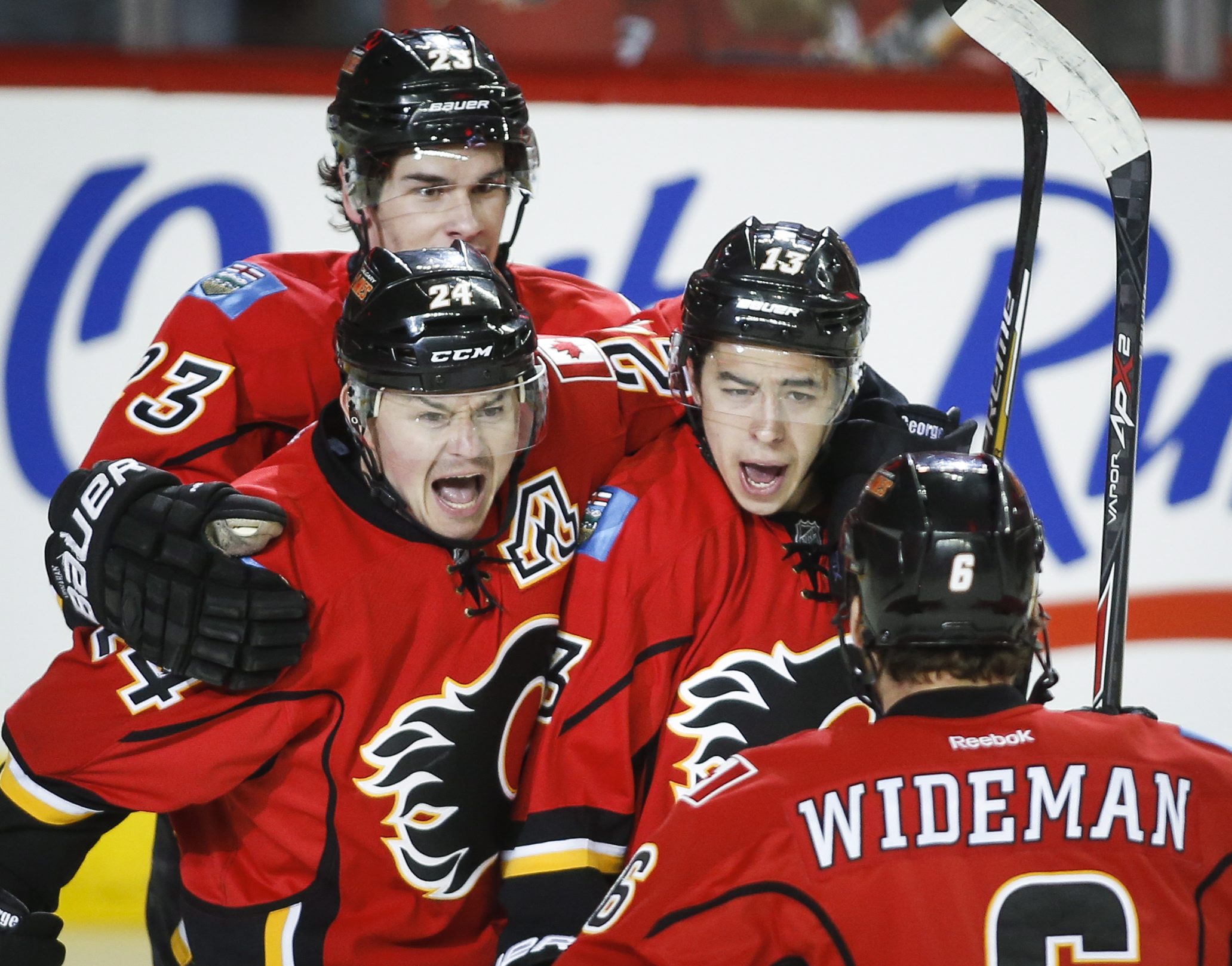 Potentially The Best Thing About This Team

Even-strength offense. The Flames averaged 2.89 goals per game last season, up from 2.46 in 2013-14. Part of that surge was a dramatic improvement in even-strength scoring, as the Flames went from 139 in the previous season to 161 last season, good for eighth in the NHL. A lot depends on Hudler, who netted 25 of his 31 goals at 5-on-5.

Potentially The Worst Thing About This Team

Regression. It’s no secret that the Flames are expected to follow the Toronto Maple Leafs and Colorado Avalanche in the parade of teams that defy their poor underlying analytics to make the postseason who see the bottom fall out the following season. The Flames made the cut in the West despite being No. 28 in Corsi percentage in the NHL.

Sean Monahan, Johnny Gaudreau and Mark Giordano. Johnny Hockey with that kind of open ice might be worth the price of admission alone. If in fact they charged admission based on game events that might not ever happen.

Three. The Jack Adams winner last season, Bob Hartley got this young team into the playoffs ahead of schedule. But he enters this season with something he hasn’t experienced in his four previous seasons in Calgary: expectations.

I mean, what else was this going to be?

Their Best Case Scenario Is …

Regression is nothing but a red herring, Giordano plays a full season and the Flames become a full-on contender in the Western Conference instead of a pleasant surprise.

Their Nightmare Scenario Is …

Giordano gets hurt again, the defense can’t compensate for average goaltending, the Flames play like the team that’s 28th in the NHL in Corsi percentage. Oh, and they finish in back of Edmonton.

Fourth in the Pacific, back in the playoffs. They’ll regress, but not enough to have the Canucks or Oilers catch them in the division. And even if they do, they’ll be fun as hell to watch, especially now that the Battle of Alberta seems worth a damn again.