You are here: Home / Basketball / BDL 25: Is Dwight Howard still a superstar? 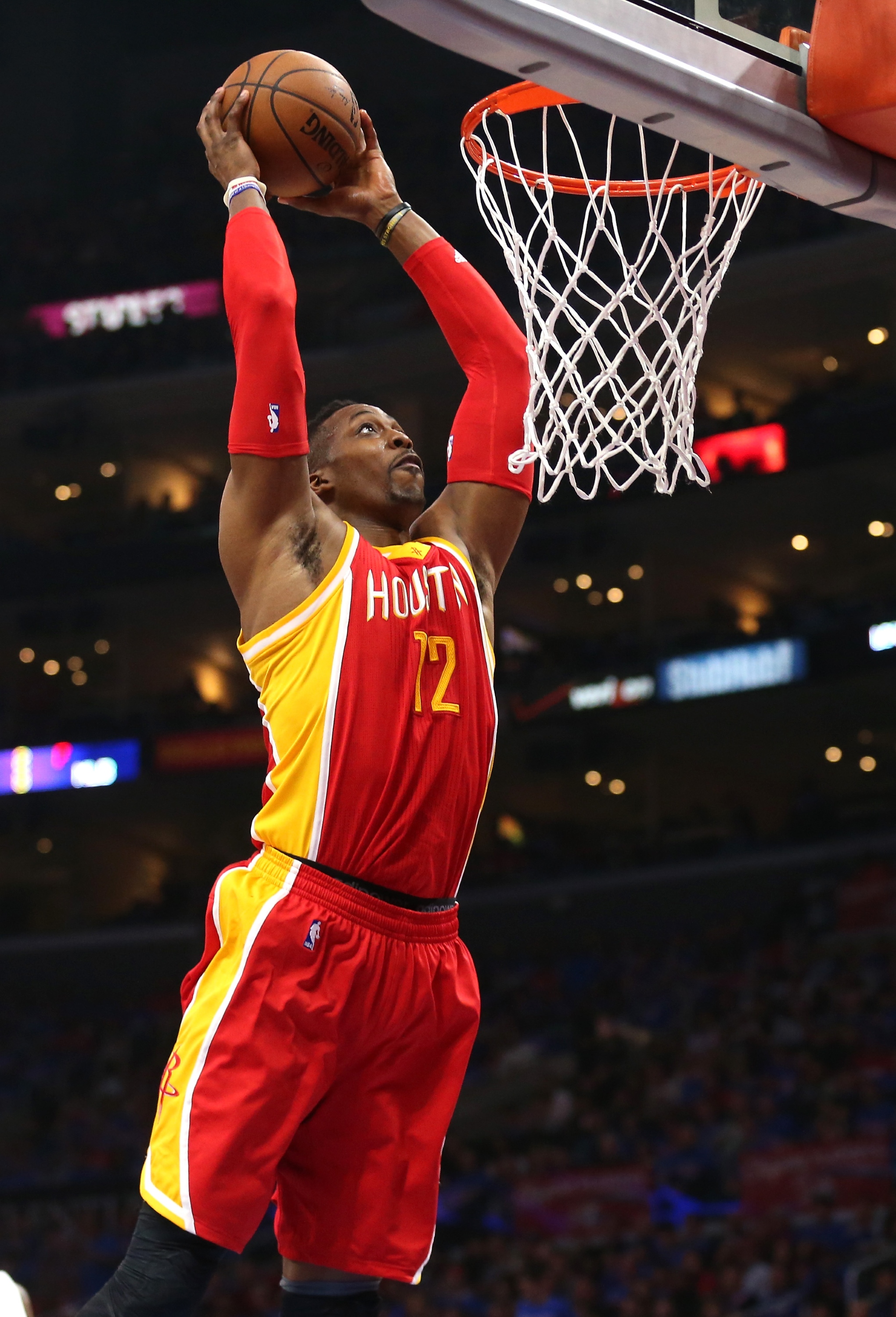 The NBA offseason has brought many changes to rosters, coaching staffs, and the list of championship contenders. As we draw closer to opening night, it’s time to move our focus from the potential impact of each offseason event and onto the broader issues that figure to define this season. The BDL 25 takes stock of, uh, 25 key storylines to get you up to speed on where the most fascinating teams, players, and people stand on the brink of 2015-16.

Dwight Howard forever tarnished his reputation during his final season with the Orlando Magic, his sole season with the Los Angeles Lakers, and the short but still eternal-feeling free-agent process that led him to the Houston Rockets. As his on-court production dipped due to injuries and the difficulties of playing on either a fading team or with several other stars, Howard waffled on decisions, approached his situation as if everything were fine, insisted on his innate likability through it all, and showed very little ability to play nice with others. And that’s just the neutral view — the negative one says that Howard is soft, doesn’t have what it takes to play alongside true champions like Kobe Bryant, and generally lacks the ineffable qualities that turn very good players into legends.

By contrast, Howard’s first two seasons in Houston rated as successes if only because they didn’t feature many such distractions. The 2013-14 campaign saw Howard bounce back from his controversy ravaged Lakers season to play 71 games with per-game averages of 18.3 points, 12.2 rebounds, and 1.8 blocks, solid numbers that nevertheless paled in comparison to his best with the Magic (and, frankly, much of what he did in Los Angeles). Last year was decidedly a mixed bag, though, as Howard missed two months with right knee soreness and played a career-low 41 games with his least prolific production in just under a decade. His absence also didn’t hinder the Rockets’ success as MVP candidate James Harden guided the team to a No. 2 finish in the West. Nevertheless, it was difficult to imagine the Rockets competing for a title without Howard in the lineup. It’s arguable if Houston ever gave Golden State a series challenge in the conference finals, but Howard was likely their most consistently effective performer in the series. He was essential to the Rockets, except for when he wasn’t.

Set to 30 in early December, Howard is at one of the more confusing career turning points in recent memory. The optimist’s view indicates that he has shed the negative image that accompanied him in Los Angeles and will soon return to widespread acclaim as one of the NBA’s best interior defenders and rebounders. Yet even this view puts Howard in a spot several notches below his Orlando peak, when he served as the league’s most impactful defender by a considerable margin and scored around 20 ppg on a terrific shooting percentage and a passable mark at the free-throw line. The Howard of 2015 is a very good player perhaps best considered as a star-level role player, the kind of guy who excels in one area and must be planned around in others. While it would go too far to say that Howard is now an offensive minus, his deficiencies at the free-throw line threaten to disrupt flow and force head coach Kevin McHale into notable decisions in many high-leverage situations and games. This is not the same player who preceded Kevin Durant as LeBron James’s perennial best competition for MVP honors.

Perhaps the Howard has diminished primarily due to injuries, which could mean that he is one healthy season from a return to outright superstardom. Unfortunately, most aging big men do not get more healthy as they enter their 30s, and it’s possible that Howard will top out as a 70-game participant over the rest of his career. The safe assumption is that, after several seasons of relative non-excellence, he has simply entered a new phase of what still rates as a Hall of Fame career.

The operative question is if that is good enough for a Rockets team that signed him in July 2013 with the expectation that he would be a second superstar alongside James Harden. Although a team led philosophically by Daryl Morey will never believe that the mere act of fielding two very famous athletes should bring a title, it’s safe to say that a resurgent Howard would raise their ceiling considerably.

On the other hand, that doesn’t mean that he needs to score. The Rockets have committed to organizing themselves as a three-point-focused squad with at most one traditional post player, albeit without the volume of big man touches that saw Howard thrive in Orlando alongside marksmen like Rashard Lewis. That leaves the center to score via putbacks, dunks, pick-and-roll opportunities and various other secondary opportunities with the Rockets, a big difference from the sort of ball-dominant ways the basketball world expects from top-level stars.

Maybe that’s for the better. Howard’s failure with the Lakers came down largely to fit, both in an emotional sense and his on-court tendencies failing to jive with those of Kobe Bryant and Pau Gasol (an injured Steve Nash didn’t help either). Next to Harden, Ty Lawson, and the Rockets’ cavalcade of quality role players, Howard’s responsibilities are relatively simple. The benefits of such an approach are clear — the five-team All-NBA First Team selection can focus on the areas where he is a truly fantastic player and not just a good one. Despite the injuries, Howard changed games in the 2015 postseason largely as a rim protector, which has always been in his greatest strength. If we project Howard as a defensive specialist with still very solid offensive contributions, then his place in Houston becomes much clearer.

That status does not make him the generation-defining star he once seemed capable of becoming, but the contemporary NBA increasingly looks like a league without room for many such players. The Spurs and Warriors titles of the past two seasons have seen versatile, defense-first players Kawhi Leonard, Andre Iguodala, Draymond Green put in series-winning performances that rate as extensions of the team identity rather than random cases of good luck. There’s no reason that Howard cannot win playoff games for Houston in the same fashion even if he’s not putting up his Shaq-mandated 35 points and 20 rebounds. Sometimes less is more.