You are here: Home / Other Sports / Jason Day’s PGA rally cut off as the weather turns nasty 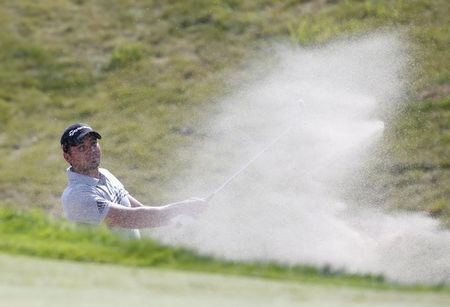 SHEBOYGAN, Wis. — Jason Day and his caddie-slash-teacher Colin Swatton were standing on the back of the 14th green, looking out in the distance as Dustin Johnson was preparing to hit his potentially par-saving putt. They both saw a flash of lightning, with Day pointing toward it.

Typically, golfers stop when they see lightning. The whole metal-rod-in-your-palms thing is a bit unsettling. But not for Day. He wanted to keep playing. So after Johnson missed his par bid to card his second consecutive bogey, Day walked to line up his 9-foot birdie putt like it was a sun-shiny Wisconsin evening.

Day tantalizingly missed his bid for three straight birdies, dropping into a semi-crouch of surprise after the putt didn’t fall. Lightning flashed again. Thunder boomed just enough to make you know it’s nearby.

And the Aussie kept right on walking to the 15th tee. He’d hit two more shots, including a sweet approach just before airhorns bellowed through the Pete Dye design. Play had been called, a big storm was coming, but before it did Day had given himself another good look at birdie.

Playing partner Rickie Fowler commented that it was getting too dark to play, with it being difficult to judge distances and see the ball in the low-hanging clouds. Day, who was in a zone, didn’t seem to mind as much.

“It was tough to kind of judge the distance, especially with wedges where you need to land it,” Day said. “It was hard to read putts out there. But for me, I just somehow got through it, which is fantastic.”

The 15th green is where Day will resume play on Saturday morning, a joint leader in the PGA Championship with fellow Aussie Matt Jones at 9-under par. Both players are 5-under in their second rounds, doing so in downright perfect scoring conditions in the afternoon wave – you know, before the storm that knocked over scoreboards, took down flags and nearly caved in several tents around the course.

Day is looking for his first major championship, coming just a few feet short of a playoff for the Claret Jug at last month’s British Open and the victim of vertigo at the U.S. Open, where he still managed to find his way into the final pairing on Sunday.

Despite nine career top-10 finishes in majors, including four on the medal stand, Day has been given a pass on his close calls because he’s never been close enough to taste the trophy only to let someone else snatch it. All four major titles have been within reach, but he’s yet to seize one.

With a birdie look on 15 and two more potential scoring opportunities in the final three holes after, Day could grab a sizable lead heading into the third round, particularly over Jordan Spieth, who is at 6-under, and Johnson, sitting at 5-under after three bogeys in his final four holes before play was halted.

The timing may not have been right for Day to be forced from the course, but his rally to a share of the lead may have positioned him just right to take advantage of a softened Straits Course on Saturday and give him his best-yet chance at that major breakthrough.