You are here: Home / Basketball / LeBron James and U of Akron to give 4-year scholarships to qualifying students 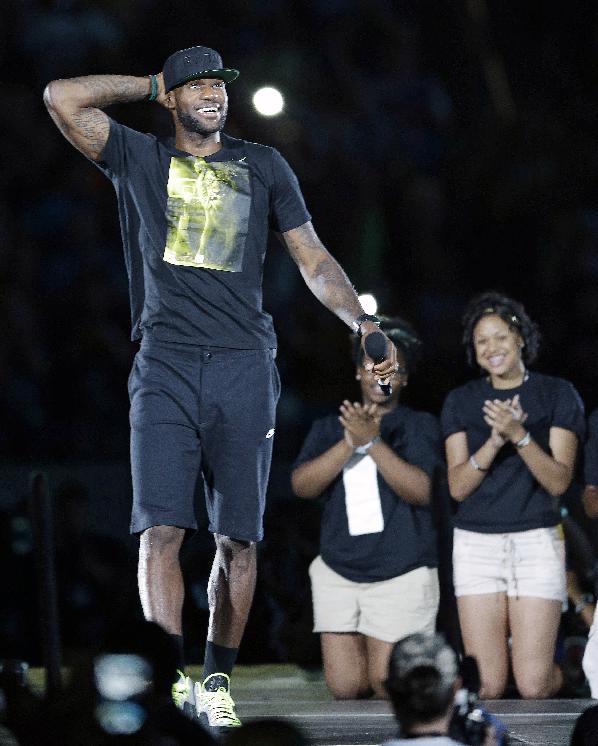 Despite selling his 2014 return to the Cleveland Cavaliers as a homecoming, LeBron James remained a committed resident of his hometown of Akron, Ohio throughout his four seasons with the Miami Heat. Through his continued residency in the city and the efforts of the LeBron James Family Foundation, the 30-year-old James has created opportunities young Ohioans that transcend whatever animosity bled over from the aftermath of “The Decision” (an event that also raised millions of dollars for local Boys & Girls Clubs). Now that James is back leading the Cavs with excellent performances, his contributions to his home state have received even more attention.

James has now partnered with the University of Akron for his most immediately impressive charitable act yet. The two-time NBA Finals MVP announced Thursday that qualifying students involved in his foundation’s “I Promise” program will receive full four-year scholarships to the university. From Tom Withers for the Associated Press:

The NBA star has partnered with the University of Akron to provide a guaranteed four-year scholarship to the school for students in James’ ”I Promise” program who qualify. The scholarship will cover tuition and the university’s general service fee – currently $9,500 per year. […]

”It’s the reason I do what I do,” said James, who announced the program Thursday while hosting an event for students at Cedar Point Amusement Park. ”These students have big dreams, and I’m happy to do everything I can to help them get there. They’re going to have to earn it, but I’m excited to see what these kids can accomplish knowing that college is in their futures.”

The school and the LeBron James Family Foundation are still finalizing the criteria for the scholarships. The students will have to graduate high school within Akron’s public school system and achieve standard testing requirements as well as fulfill a community service obligation. […]

”It means so much because, as a kid growing up in the inner city and a lot of African-American kids, you don’t really think past high school,” said James, who bypassed college to jump to the NBA. ”You don’t really know your future. You hear high school all the time, and you graduate high school and then you never think past that because either it’s not possible or your family’s not financially stable to even be able to support a kid going to college.” […]

The university is renaming its education department the LeBron James Family Foundation College of Education. The first class eligible for the scholarships will graduate in 2021.

The LeBron James Family Foundation’s “I Promise” program consists of a series of promises for middle-schoolers ranging from the vague (“I promise to be a leader”) to the specific (“I promise to go to school and to arrive on time for all of my classes”). Of the nine listed promises, the last — “I promise to accept the challenge to finish school” — carries the biggest font size. While it’s not clear how students will qualify for scholarships, this plan sets a clear and impressive goal for anyone involved in what could otherwise be a noble but squishy initiative.

It will not be possible to judge the success of this scholarship program for some time, but immediate reactions have been very positive. It’s not hard to see why — underprivileged kids will have a chance to attend college without taking on a heavy financial burden. Plus, as Withers notes elsewhere in his article, the University of Akron gets some positive news after recent controversial budget cuts totaling more than $40 million.

Cynics may also note that it’s a good public relations move for James, perhaps the most image and legacy-obsessed basketball player in history. Yet this is one area where it’s difficult to impugn LeBron’s motives — his history proves that he has always been committed to bettering the lives of those with his background. In a career that has been defined by near-constant debate and naysaying, there is little room for argument over LeBron’s work with the kids of Akron.