You are here: Home / Other Sports / Martin Kaymer thinks all the Dustin Johnson in 2010 talk is ‘a little sad’ 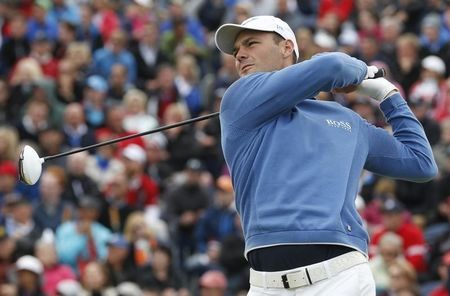 SHEBOYGAN, Wis. — Hey, remember Martin Kaymer? He’s the golfer that actually won the PGA Championship the last time it was held here at Whistling Straits in 2010.

You wouldn’t know it, though, what with all the pre-tournament talk that has centered around Dustin Johnson’s ill-fated bunker ruling on the 18th hole that kept him out of the playoff with Kaymer and Bubba Watson.

On one hand, the attention is understandable. There are few things golf fans and media like more than a good old rules snafu.

Unless it’s a last-hole collapse.

Johnson’s turn in 2010 had both. After taking a one-shot lead with birdies on both Nos. 16 and 17, Johnson bogeyed No. 18 and forced himself into what looked like the playoff. Scoring trailer drama, however, ensued and Johnson took a two-stroke penalty for inadvertently grounding his club on his second shot in an area he believed was the fairway and not a bunker.

Lost in the shuffle, though, is Kaymer, the German golfer who won his first major back in 2010 en route to a No. 1 world ranking and his eventual triumph at the 2014 U.S. Open at Pinehurst.

“It’s just a little sad that every time you talk about Whistling Straits … people talk about that he would have won,” Kaymer said on Wednesday. “[But] he would have been in the playoff. And it would have still been Bubba, Dustin and me.

“That’s the only thing that’s a little strange about the whole thing.”

To his credit, Kaymer was his usual polite self and spent plenty of time saying he felt bad that Johnson’s chance at a major championship came to that end.

“It’s never nice to see for anyone,” Kaymer said. “You don’t wish that on anyone.”

At the same time, one can see how Kaymer might be a little miffed that he’s not more of a mention in this week’s stories. The win at Whistling was “life-changing” for Kaymer and established his name among the top players in the game.

He’s also right in that Johnson’s slipup in the bunker didn’t cost him the title outright. There’s still the issue of the bogey on 18 that would’ve sentenced Johnson to the three-hole playoff instead of lifting the Wanamaker Trophy.

“The putt, it was just a regular putt that he missed,” Kaymer said. “Obviously, he would have been in the playoff. It’s always a little bit [weird] that everybody still thinks he would have won the tournament outright.”

Five years later, Johnson still has not won a major championship despite great success elsewhere on the tour. Meanwhile, Kaymer has two major titles, if not the same headlines as D.J.

Not that Kaymer should have to choose, but he’s doing OK on his side of the equation.

Kevin Kaduk is a writer for Yahoo Sports. Have a tip? Email him at [email protected] or follow him on Twitter!Follow @KevinKaduk