Shutdown Corner is previewing all 32 teams as we get ready for the NFL season, counting down the teams one per day in reverse order of our initial 2015 power rankings. No. 1 will be revealed on Aug. 8, the day before the preseason begins with the Hall of Fame Game in Canton.

Some folks probably give the Carolina Panthers a little more credit than they deserve for what happened last season.

Let’s review their season: The Panthers were 3-8-1. Then they won four in a row to win the division. Great streak, right? The teams they beat were New Orleans, Tampa Bay, Cleveland and Atlanta — four bad teams. They beat the Buccaneers and Browns by six combined points.

Please don’t point to them winning a playoff game. They hosted a wild-card weekend game (that rule needs to be changed, no 7-8-1 team should be hosting a playoff game) against the Arizona Cardinals, playing third-string quarterback Ryan Lindley. The Cardinals were laughably inept on offense. The Panthers handled business, but reality set in when they finally faced a good team the next week and the Seattle Seahawks beat them by two touchdowns.

There has been some moderate “they finished strong!” sentiment attached to the Panthers coming into this season, and yes, it is hard to win five NFL games in a row. But the degree of difficulty during that streak was moderate at best, and this was a team that went more than two months without a win. They were fortunate to be in one of the worst divisions in NFL history.

But guess what? They’re still in the NFC South. And they have won the division back-to-back seasons, and did it in a legitimate way in 2013. Quarterback Cam Newton seemed to be making strides, and the defense was really good. Late last season the improved play was due more to running back Jonathan Stewart’s hot streak and the defense. That defense, especially the strong front seven, is a constant.

The Panthers gave Newton a $100 million contract extension this offseason, and that makes sense for Carolina. Newton has had some extremely productive seasons for the Panthers, although last season seemed to be a bit of a step back. Injuries, including those from a scary car accident, have to be factored into his down season. But it will be interesting to track what kind of offense the Panthers use this season.

In a perfect world Newton would become a great pocket quarterback, with his great size and rocket arm. He has moments of greatness standing tall and firing darts to his receivers. But last year the Panthers morphed back into what NFL Films’ Greg Cosell said was the most college-based offense in the NFL. And it worked. So do the Panthers go back to an offense that utilizes Newton heavily as a runner or try to move him into the next phase of his career? For Newton to pay off over the course of his long extension, he’s probably going to have to evolve into a more consistent passer. Maybe he’s not consistently accurate enough to become that type of player, though the Panthers seem to know that and now his top three targets are Kelvin Benjamin, Devin Funchess and Greg Olsen, who all have a huge catch radius.

The Panthers are worth watching early in the season. What kind of offense will they play? And momentum is a funny thing, so maybe those five wins late in the season really do have a carry-over effect. It’s not like their division is a scary place.

2014 review in less than 25 words: The Panthers made the playoffs despite a 1-8-1 stretch in the middle of their season. And they won a playoff game. What a country.

Is the roster better, worse or about the same? The Panthers have started to get Newton a weapon or two in the passing game, but the offensive line is still weak. The Panthers signed Michael Oher, who isn’t going to fix things, and didn’t draft an offensive lineman in either of the first two days of the draft. It seems like a long time since we talked about Greg Hardy as a football player, but he used to play for the Panthers. He left this offseason. That’s a big blow on the field. Carolina also saw longtime running back DeAngelo Williams depart without doing anything of note to improve the backup situation behind the notoriously oft-injured Stewart. It wasn’t a great offseason. The roster has to be considered worse.

Best offseason acquisition: I’m not sure who to even put in this spot. Oher has not been a great pro. First-round pick Shaq Thompson is a great prospect but I’m not sure he makes a huge impact this year. Funchess, the second-round pick out of Michigan, is big but opinions on his game are split. Anyone buying Ted Ginn’s return being the missing piece? No? Cornerback Charles Tillman would have been a nice one five years ago. I guess we’ll go Thompson, who was a fantastic football player at Washington and whose versatility should be an asset right away.

Achilles’ heel: The Panthers have done a good job coaxing good seasons out of no-name offensive linemen, and center Ryan Kalil is very good. But patching together an offensive line in front of Newton is not a great long-term plan. Maybe Oher plays well on the blind side, but that’s ironically never been his best position. Perhaps guard Daryl Williams out of Oklahoma, the team’s fourth-round pick, helps now or at least down the road. But it’s still not a group that inspires much confidence. 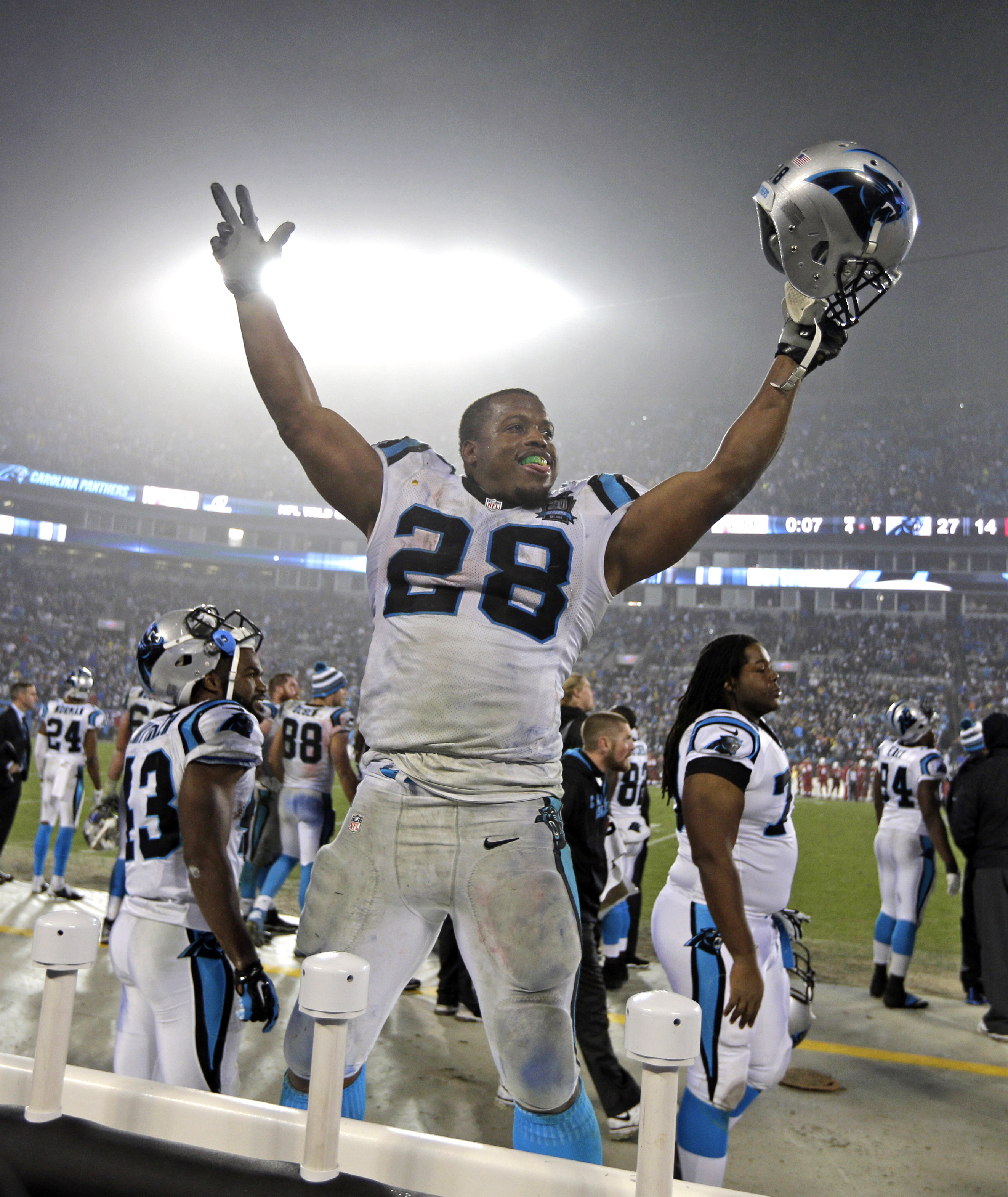 Position in flux: Maybe it’s a little negative to wonder what happens if and when Stewart gets hurt, but let’s be realistic. Stewart has played all 16 games once in the last five seasons, and has missed 20 of a possible 48 games the last three years. His injury history is so long, everyone practically forgot about him before he was great down the stretch last year. Maybe he stays healthy all season as the clear lead back (if he does, he’ll put up big numbers), and the Panthers are certainly banking on that. The backups are Fozzy Whittaker, Jordan Todman and rookie Cameron Artis-Payne. Maybe there’s an undercover star in that group, but it’s a pretty unimpressive list for a team that relies on the run as much as any in the NFL.

Ready to break out: The Panthers haven’t put many resources into the secondary, so they had to find a gem on the bargain rack. It appears they might have done just that drafting cornerback Bene Benwikere in the fifth round last season. Benwikere, from San Jose State, was promoted to full-time starter late in the season, right at the time the Panthers’ season turned around. He has been getting praised all offseason. The Panthers might have shored up an important position with a great value pick.

Stat fact: Newton’s yards passing have gone from 4.051 to 3,869 to 3,379 to 3,127 in his four seasons. He posted a career-worst rating of 82.1 last year. His yards per rush was a career-low 5.2 yards, and his yards per pass was a career-low 7 yards. His 18 touchdown passes were the lowest of his career. And this was his fourth year, when he was supposed to be posting career highs, not career lows. Chalk it up to the ankle and back injuries, but it’s worth noting heading into his fifth season.

Schedule degree of difficulty: The last five games of the season and seven of the last eight come against teams that posted losing records in 2014: Tennessee, Washington, New Orleans, Atlanta twice, New York Giants and Tampa Bay (the one tough game on paper in that run is at Dallas). Keep that in mind if the Panthers start slow. They’ll have a chance to rally late. Again.

This team’s best-case scenario for the 2015 season: The Panthers had a really good run in 2013, when they earned a playoff bye. If Newton and Stewart stay healthy, the Panthers will run the ball very well. The defense has been good for a few years now, highlighted by all-world linebacker Luke Kuechly. If certain things click, and the NFC South is bad again, a double-digit win season and another division title could happen.

And here’s the nightmare scenario: If Stewart goes down and the offensive line struggles, what’s the Panthers’ counter punch? Carolina had that 1-8-1 run before saving their season in December, and basically just take a look at that stretch to remind yourself what the worst-case scenario is.

The crystal ball says: I’m not blown away by the Panthers (and I still have a nagging worry that I underrated the Saints) but I think they’ll play a style that can win the NFC South. I think Newton rebounds. He’s a tough guy and played through some serious injuries last season, and it’s hard to quantify how much that affected his game. He’ll be better now that he’s healthy. The Panthers will do what it takes to win (re: run the same college-based attack they used late last season) and do enough to win the South.