You are here: Home / Baseball / At 40, R.A. Dickey is primed for his best season with Blue Jays

At 40, R.A. Dickey is primed for his best season with Blue Jays

R.A. Dickey, one of the oldest – and certainly wisest – players in MLB, could be on the verge of adding another special chapter to his already uncommon story.

This will be Dickey’s 19th season in professional baseball, a journey with so many twists and turns its been compared over and over to the pitch that gave him a new lease on life on the mound, the knuckleball.

His rise to the top is well documented. He cracked 20-plus starts for the first time in 2010, a decade and a half after he was picked in the first round, and finally had his shining moment in 2012 at 37, winning the NL Cy Young with the New York Mets. After that season the rebuilding Mets cashed in, sending Dickey to Toronto for a package that included two premium prospects.

Dickey’s two years with the Blue Jays have been respectable, but he hasn’t come close to replicating his Cy Young dominance.

Can 2015 be that year? A more relaxed approach this offseason has the 40-year-old right-hander in the right frame of mind and in strong physical shape heading into the regular season. In fact, he feels like he’s primed for his best season in Toronto.

“I have changed up [my routine] a little bit in the sense that I’m taking it a bit slower and trying to peak at the right time,” Dickey told Big League Stew in an interview on behalf of Head and Shoulders’ Season of the #Whiff campaign. “I feel like my innings have been built up, my pitch counts have been built up and I’m feeling confident that I’ll be ready when we break camp.” 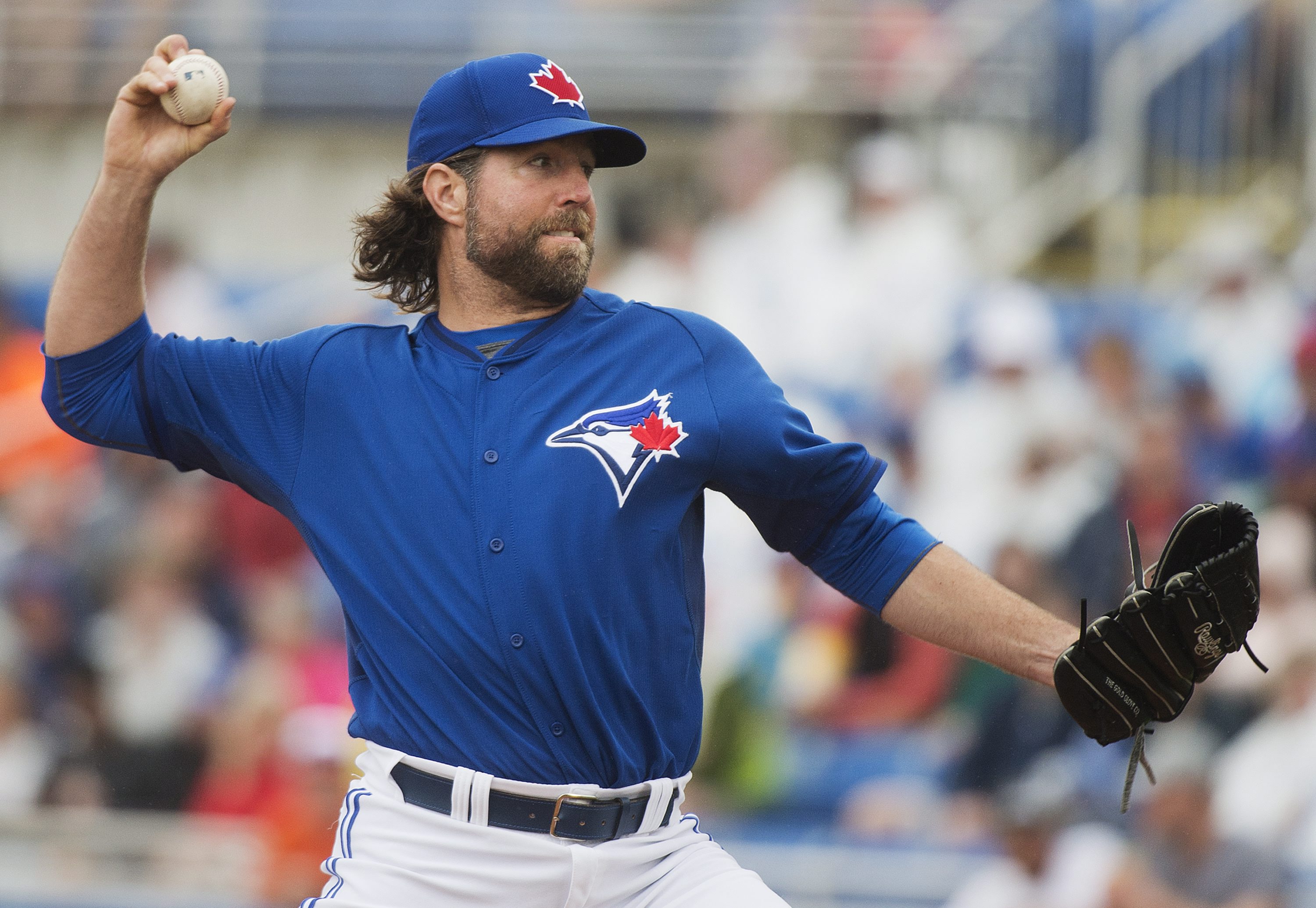 There’s a reason behind the adjustment. Dickey struggled early in each of the past two seasons before finding his groove as the calendar turned to summer.

He can’t afford to get off to another slow start, because once again, just like when he was the star acquisition in 2013, optimism swirls around his Jays. There’s the belief that putting catcher Russell Martin and third baseman Josh Donaldson in a lineup that already includes Jose Bautista, Edwin Encarnacion and Jose Reyes is enough to push the team into contention in the American League.

Count Dickey among those believing that general manager Alex Anthopoulos’ hot stove moves will lift Toronto toward the playoffs.

“Not only are Russell Martin and Josh Donaldson fantastic players but they really bring a nice energy to the clubhouse,” said Dickey. “It’s been a great spring training in the sense that everybody’s really getting along and we’re feeling good about where we are as a club.” 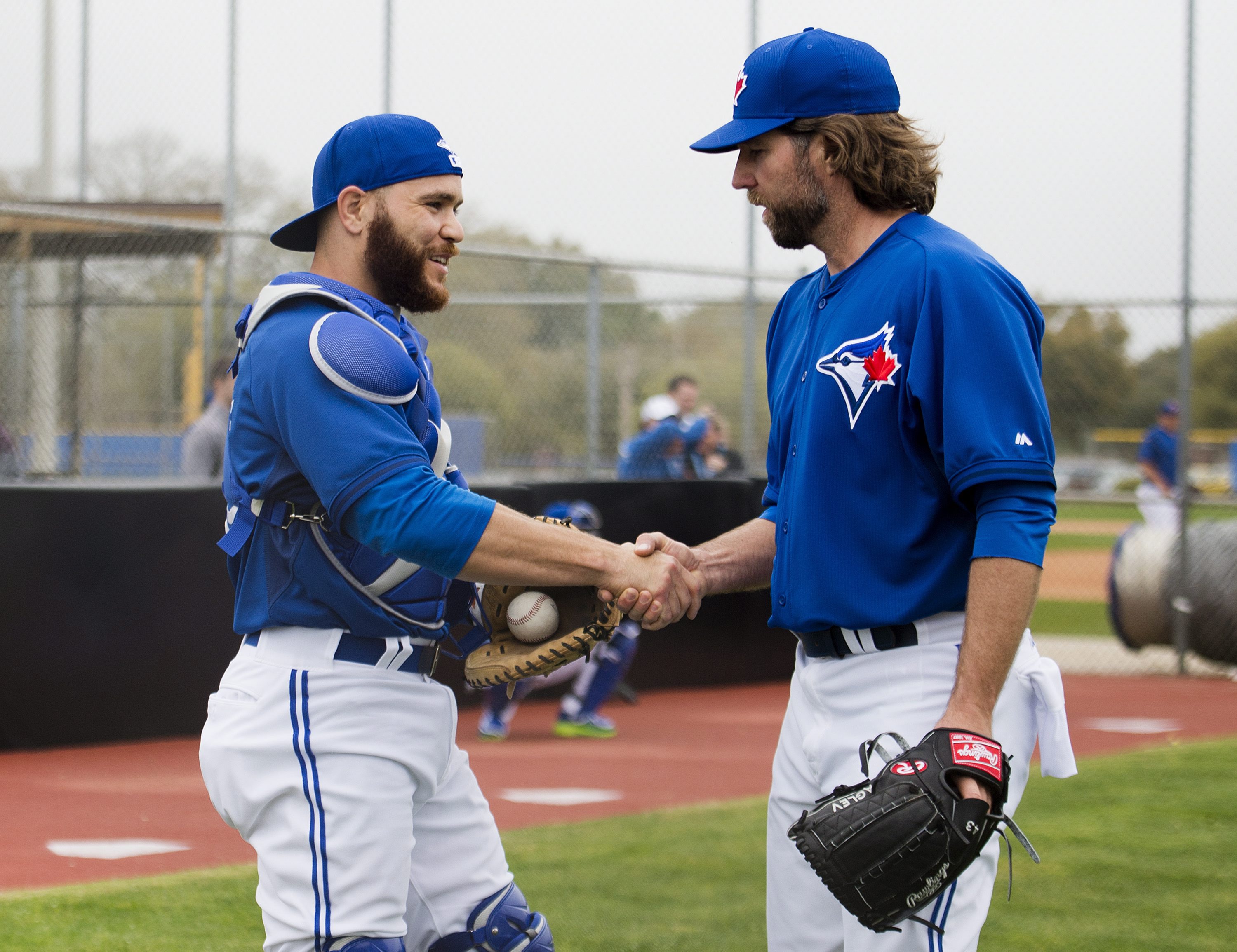 The infusion of talent should help Dickey on the field too. A below average defense held the Blue Jays back in 2014 and the front office made improving in that area a priority as it remodeled the roster over the last few months. Toronto’s five new starters, Martin, Donaldson, left fielder Michael Saunders, first baseman Justin Smoak, and rookie center fielder Dalton Pompey, are all reputed to be strong defensive players at their positions.

Having gifted glovemen in the game is especially important for Dickey because his knuckleball forces fielders to stay alert.

“They see that the contact off the bat is a little bit different when I’m pitching, and I like to work quickly so guys really get accustomed to a rhythm when I’m out there,” says Dickey. “When you play on AstroTurf you want a great defense behind you and we’re starting to really shore up some positions giving us the opportunity to be one of the best defensive teams in baseball.”

Ultimately though, Dickey knows he personally needs to be better to ensure Toronto’s postseason aspirations stay on track. More importantly, he knows what he needs to do to achieve it.

The biggest difference between his time with the Mets and the Blue Jays has been the huge spike in walks allowed since the trade. He’s given up almost as many free passes (145) in 440 1/3 innings with Toronto as he did in 616 2/3 innings in New York (150).

Reducing the amount of walks he hands out is at the forefront of Dickey’s goals for the season. So far, so good: in 12 spring training innings he’s walked just one and struck out seven.

Soon, he’ll have the opportunity to show that he can command his effectively wild pitch when the games matter. If all goes to plan, there’s the distinct possibility Dickey will hit the October stage for the first time.

“I think if I can get ahead in counts, shave my walks down, throw strikes, and pitch deep into games that I’m going to have a pretty good season,” says Dickey. “I would say a successful season for me would be 200 innings, 15 or more wins, keep my walks around 50 or 60, [while] going to the playoffs and hopefully to the World Series.”

It appears the pieces are in place for Dickey, at age 40, to deliver one more charmed run. The way his career has unfolded, it shouldn’t come as any surprise when he pulls it off.