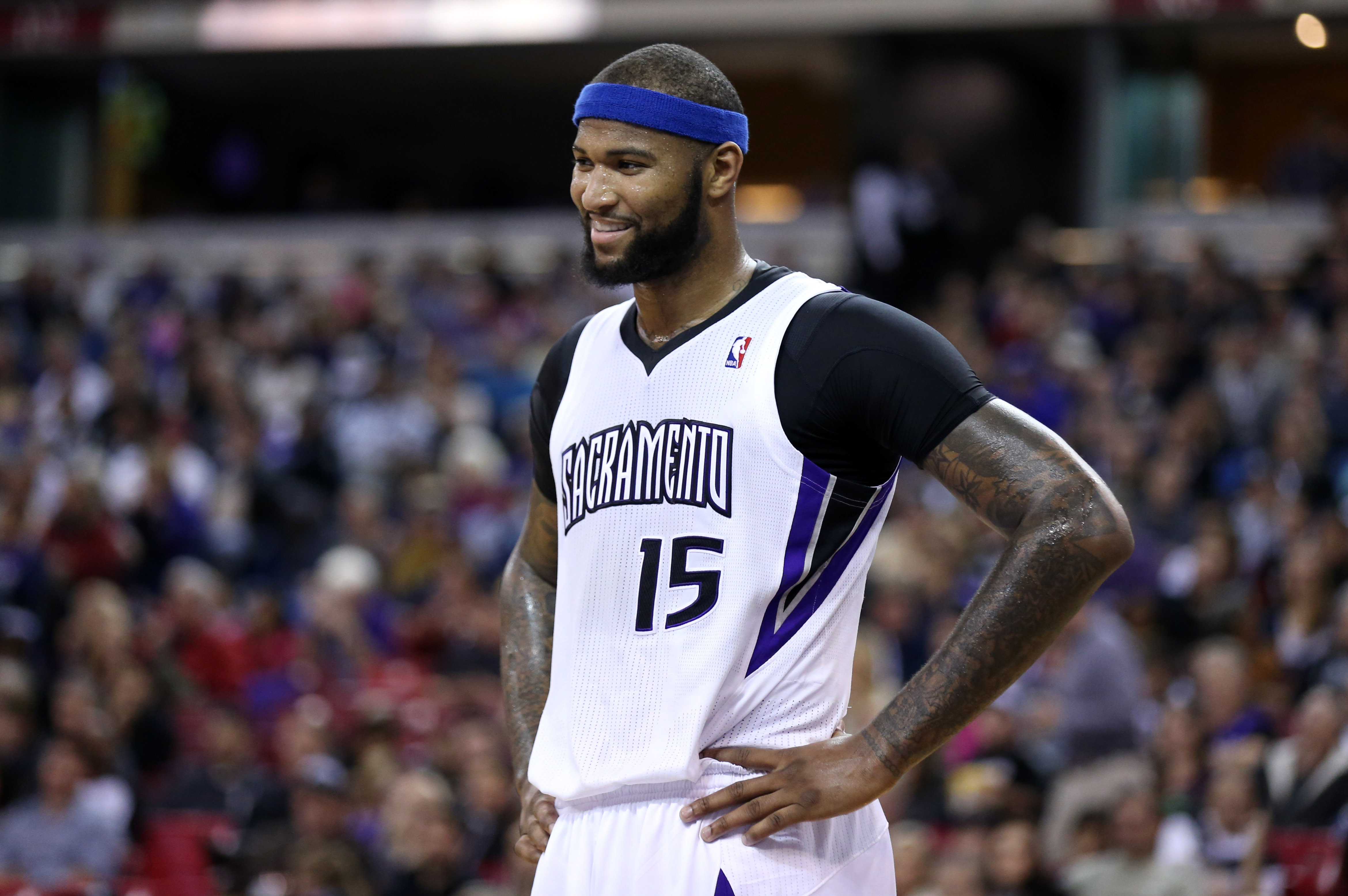 You’d forgive DeMarcus Cousins if he woke up Friday feeling a little salty. The Sacramento Kings center once again found himself on the outside looking in when the roster of coach-selected reserves for the 2014-15 NBA All-Star Game were announced Thursday, joining Portland Trail Blazers point guard Damian Lillard as the most notable omissions from the midseason exhibition — notable even among NBA stars — despite ranking sixth in the NBA in scoring (23.8 points per game), third in rebounding (12.3 rebounds per game) and sixth in Player Efficiency Rating (25.2, miles above the league average of 15) to go with markedly improved defensive work and standing as pretty much the sole bulwark against the Kings once again being one of the very worst teams in the NBA.

But rather than stewing over what some have termed a robbery, Boogie seems to have woken up smiling. That’s because he had an anniversary to celebrate:

Today’s the day!! Let’s all show him some love!! @ClayTravisBGID http://t.co/t54K0tC6Pn

Yep, it’s been five long years since Clay Travis — formerly of AOL FanHouse, Deadspin and CBS Sports, a former contributor to Yahoo Sports, and currently of FOX Sports — tweeted that Cousins, then starring as a freshman for John Calipari’s Kentucky Wildcats, was bound for a troubled future:

There is a 100% chance that Demarcus Cousins is arrested for something in the next five years. 100%. Write it in stone.

This was an irresponsible and ridiculous statement to make even at the time, because it was based on, well, nothing. The sum total of Cousins’ transgressions at that point consisted of a suspension during his sophomore year of high school for a physical altercation with a bus driver (in which Cousins said he was defending himself), allegations that he’d been improperly recruited by the next school he attended, some on-court outbursts of emotion aimed at referees, and some bouts of bickering with Calipari.

That’s it — a penchant for technicals, for arguing, for not demurring in the way that college kids are expected to in the face of authority figures and legendary coaches, rather than anything in the way of off-court trouble or disciplinary action. (That legendary coach, by the way, continues to swear by Cousins, calling him his “son” just as he does with fellow UK products like John Wall and Anthony Davis.)

It’s been more of the same at the pro level, as Cousins’ clashes — with former coach Paul Westphal, with other players, with referees, with announcers, with Team USA brass (though those differences were eventually resolved) and so on — often drew more coverage and interest than the fact that he was becoming a star, a leader and a player/person worth treating (and paying) like a franchise cornerstone … and, of course, that he’s never actually gotten into any trouble off the court.

… and whether Boogie already had the date circled or just saw this and said, “Oh, right,” he decided to have a wonderful bit of fun with it.

Rather than cop to having been irresponsible and 100 percent wrong, Travis smirked into the skid:

@boogiecousins Funny and well played. $5k to your charity of choice. Let me know where to send it.

… which, of course, does nothing to show any sort of remorse for having been so blindly, blatantly off-base back then. Oh, well. Being small is its own punishment, I suppose, while living well — and calling out nonsense in the process — is pretty damn good revenge.

Speaking of vengeance and its wreaking, it ought to be interesting to see how Cousins goes about delivering the big payback in the second half of the season to those who overlooked him in All-Star voting. It’s worth wondering, though, what more he could have done to convince those who still doubt in the first place.

According to NBA.com’s stat tool, Sacramento has outscored opponents by 6.4 points per 100 possessions with Cousins on the floor, equivalent to a top-five mark in the NBA over the course of the season, and has been outscored by a whopping 12.8 points-per-100 with Boogie on the bench, significantly below the Philadelphia 76ers’ league-worst mark. The Kings have played like a top-10 unit on both sides of the ball with Boogie in the mix and like a bottom-five outfit without him, and their season — which, lest we forget, started with such promise! — began to crater when he went down to a bout with viral meningitis that led to enough losses to provide cover for jettisoning head coach Michael Malone in favor of the uninspiring Tyrone Corbin.

And yet, despite the statistical arguments in his favor, despite the inarguable impact his presence and absence have on the Kings’ likelihood of winning and losing, and despite even his demonstrable steps toward cutting down on self-inflicted wounds — he’s got just four technical fouls through 32 games, tied for 23rd in the league and (for the moment) below his ambitious preseason goal — Cousins is presently on track to be just the second player ever to be this productive and not be named an All-Star. Looking on the bright side, the other is Kareem Abdul-Jabbar, so at least he’s in good company. (Nos. 3 through 6 on that second list — this year’s models of Stephen Curry, Anthony Davis, James Harden and LeBron James — have all been named to this year’s All-Star Game, and Nos. 7 and 8 — 1998-99 Karl Malone and Shaquille O’Neal — didn’t get an All-Star Game that year due to the lockout pushing the start of the season back to February.)

Whether Cousins can reach another level with his production and defensive work remains to be seen, but at this point, I wouldn’t consider it too wise to doubt that he can … especially now that we’ve seen how Boogie handles doubters.