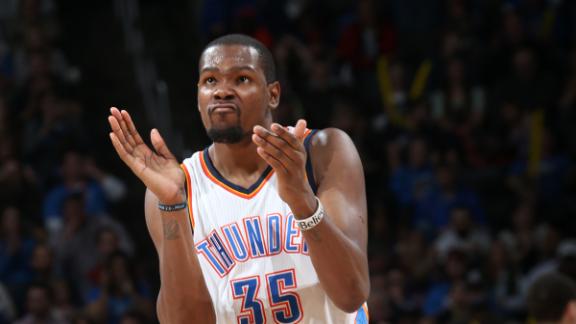 Now Or Never For Thunder

OKLAHOMA CITY — Russell Westbrook scored 17 points, had a career-high 17 assists and matched a career best with 15 rebounds to help the Oklahoma Thunder beat the Golden State Warriors 117-115 on Friday night.

Westbrook had eight assists and six rebounds in the fourth quarter to help the Thunder pull away.

Kevin Durant scored 36 points, Serge Ibaka matched his career high with 27 points and Dion Waiters added 21 for the Thunder. Oklahoma City had lost three of four, but bounced back by shooting 53 percent from the field.

The loss ended the NBA-leading Warriors’ eight-game winning streak. Klay Thompson scored 32 points, Marreese Speights had 20 and Stephen Curry added 19 for the Warriors, who allowed their highest point total of the season.

Oklahoma City trailed for most of the first half. Late in the second quarter, Westbrook went for a hard throwdown and missed, but the ball bounced straight up in the air and in to give the Thunder a 53-51 lead. They scored the next five points to push their advantage to seven.

Oklahoma City inbounded the ball with 0.1 seconds left in the first half, and Steven Adams was fouled by Justin Holiday on a tip attempt. Adams made the first free throw and missed the second, but Westbrook flew in and tipped the ball at the buzzer to give the Thunder a 69-60 lead.

Warriors coach Steve Kerr didn’t like the call that put Adams at the line, and he was tagged with a technical foul for arguing. Golden State personnel restrained him as the team left the court.

Anthony Morrow drained a 3-pointer at the third-quarter buzzer to put the Thunder ahead 98-91. Ibaka scored 14 points in the fourth, and the Thunder remained in control the rest of the way.

Thunder: Kendrick Perkins was issued a technical foul with 3:30 left in the first quarter. … The Thunder held the Warriors to 8-for-27 shooting in the second quarter. … Oklahoma City out-rebounded the Warriors 54-43.

Warriors: At Houston on Saturday.

Thunder: At Orlando on Sunday.