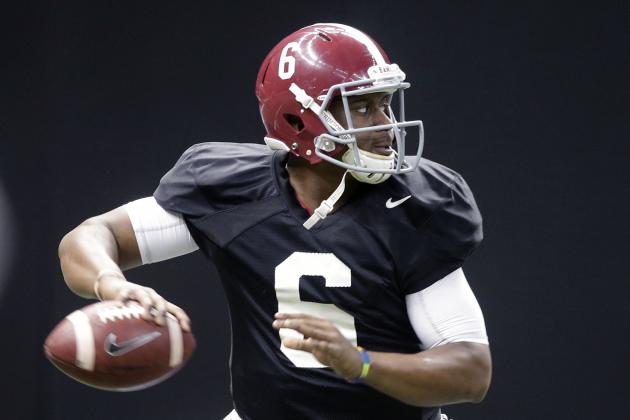 Within the next 48 hours, we’ll officially be in a new year, and that means just one thing: The inaugural College Football Playoff is finally here.

The beginning of 2015 brings with it a CFP format many of us have been yearning for since the BCS came to fruition. While the playoff features just four teams—many enthusiasts would like to see it increased to six or eight—it’s a big step in the right direction and will give us arguably the most deserving national champion ever.

We have two very compelling matchups taking place on January 1, as quarterbacks Marcus Mariota and Jameis Winston go head-to-head in the Rose Bowl, and Nick Saban and Urban Meyer will surely turn the Sugar Bowl into a chess match between coaching masterminds.

As we count down the hours until these highly anticipated contests commence, let’s take one final look at the updated odds and predict the winner for each semifinal clash.

Can the Seminoles slow down Mariota and the Oregon offense? This question has been the cause of many debates since the CFP matchups were announced.

Mariota deservedly won the Heisman Trophy this season after tossing 38 touchdown passes, rushing for 14 scores and throwing just two interceptions. He led the third-ranked offense, which averaged 46.3 points per game. Factoring in talented freshman ball-carrier Royce Freeman, the Seminoles won’t stop the Ducks; they can only hope to contain them.

Oregon scored at least 42 points in each of its final eight games during the season, which included a contest against Stanford’s fourth-ranked total defense. With that in mind, we should be asking a new question: Can Winston and the Seminoles offense keep up with Mariota and the Ducks?

Winston finished his season on a high note, completing 70 percent of his passes for 309 yards and three touchdowns in the ACC title game against Georgia Tech. That’s a great sign considering the Ducks rank 102nd in the nation against the pass and are without star cornerback Ifo Ekpre-Olomu for the Rose Bowl.

Still, Winston’s interception total of 17 this season is a scary number heading into this contest. While he didn’t throw a pick against Georgia Tech, he did toss at least one in each of his previous six contests, which included throwing four against Florida.

While freshman running back Dalvin Cook and senior wide receiver Rashad Greene will ensure the Seminoles put up some points on the Ducks, it’s simply too difficult to trust the inconsistent Winston to produce a big enough performance to keep pace with the prolific Mariota.

When looking at a contest between Ohio State and Alabama, a shootout isn’t exactly the first word that comes to mind; however, the Crimson Tide have scored at least 42 points in three consecutive games, and the Buckeyes have done the same. In fact, over the final three games of the season, Alabama tallied 145 points and Ohio State accumulated 143.

All right, so we probably won’t see those kinds of gaudy numbers when Alabama’s fourth-ranked scoring defense faces off against Ohio State’s 21st-ranked scoring defense in the Sugar Bowl, but one thing is for certain: Based on the sheer potency of these two offenses of late, defense will prove to be the difference maker in this contest.

Both squads are coming off impressive defensive showings. Alabama held Missouri to 13 points in the SEC Championship Game, limiting the Tigers to 10 first downs and 313 yards of offense. Ohio State shut out Wisconsin in the Big Ten Championship Game, allowing just 258 yards to the Badgers offense and forcing four turnovers.

So, which team has the upper hand?

Well, that would be Alabama. While the Buckeyes were certainly impressive in the Big Ten title game, their defense gave up 24 points or more in their four previous games. The Crimson Tide, on the other hand, only gave up more than 23 points in a game just once this season.

Quarterback Cardale Jones proved to be a very effective replacement for the injured J.T. Barrett, but his inexperience will rear its ugly head against a defense as stout as Alabama’s. While running back Ezekiel Elliott has been a fantastic complement to Jones, he’ll have a tough time finding room to run against the nation’s top-ranked run defense that allows an average of just 88.7 yards per game, 2.81 yards per carry and three rushing scores all year.

Alabama’s defense will make Ohio State’s offense one-dimensional and come away with a win as a result.

All team rankings and statistics courtesy of NCAA.com and current as of December 30 at 12:30 a.m. ET.