You are here: Home / Basketball / Cavs pummeled by Pistons in 23-point defeat


Pistons knock down 17 3-pointers, to blow out Cavs in Cleveland 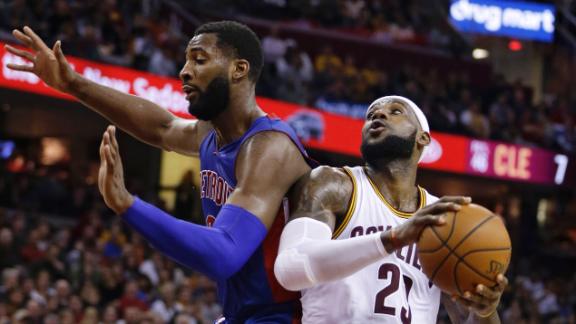 CLEVELAND — Brandon Jennings scored 25 points, and the Detroit Pistons used an 18-0 run in the second quarter to roll past the Cleveland Cavaliers 103-80 on Sunday.

It was Cleveland’s second blowout loss at home in less than two weeks. The Cavaliers lost 127-98 to Atlanta on Dec. 17, and the convincing victory for Detroit drew boos from the home crowd.

Andre Drummond had 16 points and 17 rebounds for the Pistons (7-23), who were coming off a 119-109 victory over Indiana on Friday. Reserve Jodie Meeks scored 14 points, and Kentavious Caldwell-Pope had 13.

Sunday’s loss is the worst defeat by a LeBron James team in his career against a team with a win percentage below .300 at least 20 games into the season

Detroit set a season high for made 3-pointers by going 17 for 31 from long range.

Kevin Love had 20 points and 10 rebounds for Cleveland, and LeBron James finished with 17 points, 10 boards and seven assists. Tristan Thompson also had a double-double for the Cavs, collecting 18 points and 11 rebounds.

James appeared to get hit in the left hip late in the first half, but started the third quarter. The four-time MVP, clearly frustrated by the loss, went to the bench for good with 5:34 remaining and Cleveland trailing 95-71.

The Pistons have won both of their games since releasing veteran forward Josh Smith last week.

Cleveland led 32-17 early in the second and was ahead 43-32 midway through the period before the Pistons took over. Detroit hit four 3-pointers, including two by Jennings, and Drummond had a dunk and a basket in the lane in a span of 4:40.

The Pistons led 50-43 before Love hit a 3-pointer and James added a free throw in the last minute of the first half, but Detroit increased the lead to double figures early in the third quarter and steadily pulled away, leading by 27 points in the fourth.

Cavaliers forward Shawn Marion left the game with an ankle injury after missing a dunk on a pass from James. Marion landed awkwardly and was on the floor for a couple of minutes before being helped to the locker room. He returned in the third quarter.

It was Detroit’s first road win against an Eastern Conference team this season.

Pistons: Coach Stan Van Gundy stuck with the starting lineup he used in the first game without Smith, which included a front line of Drummond, Greg Monroe and Kyle Singler with a backcourt of Jennings and Caldwell-Pope. … F Anthony Tolliver, who was acquired Wednesday in a trade with Phoenix, was in uniform for the first time, but did not play.

Pistons: At Orlando on Tuesday.

Cavaliers: At Atlanta on Tuesday