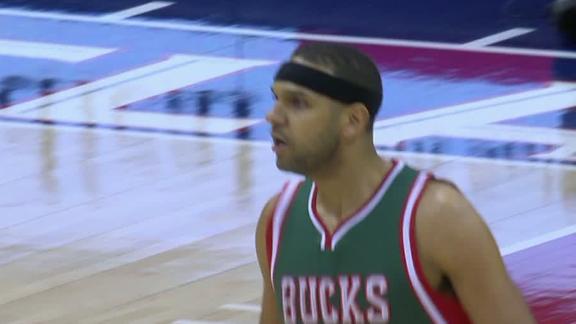 ATLANTA — Reserve forward Jared Dudley made all 10 shots, including four 3-pointers, and scored a season-high 24 points Friday night to lead the Milwaukee Bucks to a 107-77 victory over the Atlanta Hawks.

Dudley matched Brooklyn’s Jarrett Jack for the best-shooting night in the NBA this season. According to the Elias Sports Bureau, Dudley is the first player in NBA history to shoot 100 percent from the field with at least 10 field goal attempts, including at least three 3-point attempts.

The Hawks had won 14 of 15 but were routed in front of a rare sellout crowd at home, where they entered with a 13-2 record that was the best in the Eastern Conference.

After Dudley made back-to-back 3-pointers for a 21-18 Milwaukee lead with 2:51 left in the first quarter, the Bucks led the rest of the way and went ahead by 30 in the final period.

Paul Millsap led the Hawks with 22 points and 11 rebounds. Atlanta was coming off successive victories over Chicago, Cleveland, Houston, Dallas and the Los Angeles Clippers.

The Bucks juggled their lineup, with former Hawk Zaza Pachulia starting in place of the ill Larry Sanders, and guard O.J. Mayo moving to the bench with Kendall Marshall starting instead.

In just his fourth NBA start and fifth NBA game, Milwaukee rookie center Johnny O’Bryant scored eight of his career-high 12 points in the first quarter, which the Bucks led 24-22.

Other than Millsap, who made all eight of his shots in the first half to score 18, the rest of the Hawks shot 9 for 30 (30 percent).

Dudley scored 15 in that time, making all three of his 3-pointers, and Bayless added 12.

The Hawks never threatened in the second half.

Bucks: Milwaukee is 4-0 with Pachulia in the starting lineup. He scored all of his 14 points in the second half. … Bucks coach Jason Kidd believes Mayo plays better with Milwaukee’s second unit. … Ersan Ilyasova missed the game after suffering a concussion in Tuesday’s loss to the Hornets. That was his first game after missing nine straight following a Dec. 2 nasal fracture and then undergoing surgery.

Hawks: Atlanta’s 77 points were a season low by 10. … After scoring a career-high 25 points in the Hawks’ win over the Clippers on Tuesday, forward DeMarre Carroll missed all six of his shots and went scoreless. … Jeff Teague returned to the starting lineup after missing three games with a hamstring pull, and then coming off the bench behind Dennis Schroder in Tuesday’s win. … Rookie forward Adrien Payne made his NBA debut, grabbing three rebounds and scoring two points. The Hawks drafted him 15th overall in June out of Michigan State. He missed his first five NBA games with plantar fasciitis and was assigned to the D-League three times (with Austin and Fort Wayne), averaging 13.4 points, 8.8 rebounds and 2.3 assists in 11 games.

The Associated Press contributed to this report.