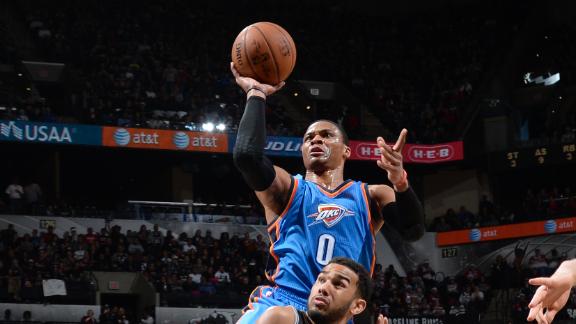 The Thunder earned their sixth straight regular-season victory over the defending NBA champions in the first meeting between the teams since San Antonio topped Oklahoma City in six games on the way to a fifth title.

The Thunder were without reigning MVP Kevin Durant, and the Spurs were missing Finals MVP Kawhi Leonard, but there was still plenty of firepower.

Serge Ibaka had 21 points, including going 3 for 4 on 3-pointers for Oklahoma City (14-16). Steven Adams added 16 points and 15 rebounds to offset San Antonio center Tiago Splitter matching his season-high with 14 points.

Matt Bonner had 17 points to lead seven players in double figures for San Antonio (18-12), which has lost five of six.

Tim Duncan had 15 points, six rebounds and five assists for the Spurs. Duncan left with 4:31 remaining, walking gingerly and grabbing the brace on his left knee, but returned 2 minutes later.

Westbrook wasn’t in a festive mood despite standing among many fans wearing Santa hats, and “Happy Holidays” messages emblazoned on the stanchions of both rims.

He made a jumper over Parker and Duncan and hit the floor after getting bumped. Westbrook rose in defiance and banged his chest with a close fist twice as San Antonio coach Gregg Popovich called a timeout 4 minutes into the third quarter with his team trailing 60-53.

Earlier, Westbrook stared down Popovich after assisting on Anthony Morrow‘s 3-pointer. He then stood at midcourt screaming in celebration as the Spurs coach called timeout with his team behind 46-40 with 4:12 remaining in the first half.

The Spurs rallied while Westbrook sat for six minutes bridging the third and fourth quarters.

Manu Ginobili leapt in the air and feigned a pass right, feeding Splitter on the left side for a layup and a 77-75 lead to close the quarter.

Westbrook made two contested layups upon his return to tie it at 86 with 8 minutes remaining. He then was given a technical along with Cory Joseph after they ran down the court slapping away at each other’s arms.

Thunder: Oklahoma City ranks second in the league in rebounding at 45.6 per game. … The Thunder were playing on Christmas for the fifth straight season. … Westbrook has scored 20-plus points in 14 straight games, the longest streak of his career. Rookie F Mitch McGary (left leg) sat out the game along with Durant.

Spurs: San Antonio has 18 games in December, which will tie the franchise record for the most played in the month. The December schedule includes seven back-to-back games. … Duncan has played in 1,279 career games, surpassing former Lakers forward A.C. Green for 19th on the NBA career list. Ex Knicks big man Charles Oakley is 18th at 1,282. … Duncan took a hard fall while attempting to block Westbrook’s shot with 5:15 remaining in the first quarter. After staying down on the floor for nearly a minute, Duncan rose and immediately began complaining because a foul was called against him on the play. … San Antonio used its 18th starting lineup of the season.