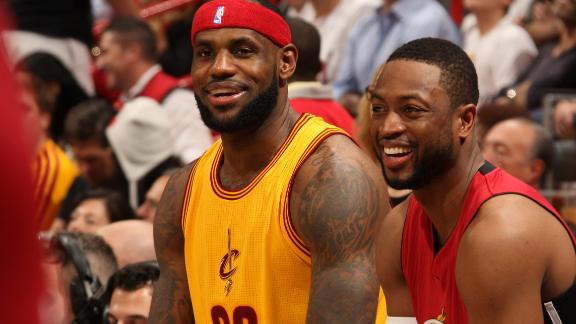 MIAMI — Dwyane Wade scored 24 of his 31 points in the first half, Luol Deng finished with 25 points, eight rebounds and eight assists, and the Miami Heat beat the Cleveland Cavaliers in LeBron James‘ first game back at his former home 101-91 on Thursday.

Chris Andersen scored 12 for the Heat, who led by as many as 17, trailed for a moment in the fourth quarter before gathering themselves and pulling away again.

James scored 30 points for the Cavaliers, hugging his former teammates before the game and after the final buzzer. It was James’ first time as an opponent in Miami since helping the Heat reach each of the last four NBA Finals, winning two titles.

Miami was again without Chris Bosh, still sidelined by a calf injury.

James and Wade shared a long embrace before the game, then were chatting and laughing as they waited for the second half to start. They even had another conversation before leaving the floor once the game was over.

In the end, only Wade left with what each wanted most — a win.

Wade missed nine straight shots in the second half, going from sizzling to icy. Backcourt mate Mario Chalmers finished just 2 for 12 from the floor.

A Heat team that has struggled at home all season found a way.

Nonetheless, Miami held onto the lead, sans for one moment after a dunk by James in transition with 11:20 left. After that slam put Cleveland up 78-77, he got a technical foul for hanging on the rim a bit too long — so that lead lasted exactly zero seconds.

Wade made a free throw after the technical, tying the game again.

The Cavs lost their two best players briefly in the second half.

James went to the locker room, limping on his left leg in the third quarter. He leapfrogged a row of baseline seats while trying to run down a 75-foot pass from Love, landing on his feet and not appearing to be injured.

Moments later, he grabbed at what appeared to be the area behind his left knee, asked to come out of the game and limped to the locker room. He returned quickly, but the Cavs also lost Irving for a few moments after he took what appeared to be a shot to the face.

There were people in the stands wearing James jerseys of all varieties — his high school one, several versions of his Heat ones, and some with the current gold model. Others wore T-shirts with some of his Nike-inspired slogans, and a few with the wording “Don’t Hate The King” and his No. 23 on the back were also spotted.

Cavaliers: Love started at center, the first experiment of sorts for the Cavs now that Anderson Varejao (left Achilles) is gone for the season and will need surgery. … Asked before the game if he was upset about the Heat struggles this season, James simply said, “no.” … Cleveland’s next trip to Miami is March 16.

Heat: Wade made his 10th Christmas start, twice as many as any player in Heat history. Mario Chalmers started on the holiday for a fourth time, tying Bosh and James for third-most. … Chris Andersen, Shawne Williams and Deng all got their first Christmas starts with Miami, which has had 26 players start a game on the holiday. … The second half was briefly delayed while the lights were coming back up after Flo Rida’s halftime show.

Cavaliers: At Orlando on Friday.