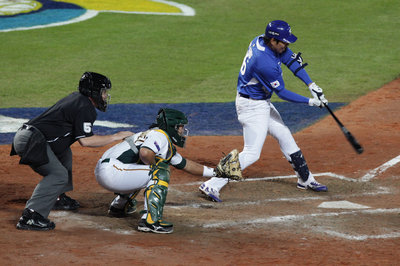 We know for a fact somebody won the rights to negotiate with shortstop Jung-Ho Kang, who on Dec. 14 became the first Korean position player ever to be posted.

We also know for a fact that the Nexen Heroes of the Korean Baseball Organzation (KBO), Kang’s current employer, have accepted the higher than expected winning bid, which reportedly came in at $5,002,015.

Per source: Nexen was expecting about $2 million in posting (low expectations after two KBO players before Kang got around that money)

The first tweet is in reference to Kwang-hyun Kim and Hyeon-jong Yang, a pair of Korean pitchers who were posted earlier this winter. Left-hander Hyun-jin Ryu commanded a Korean record $25.7 million bid in 2012, so Kang was nowhere near that neighborhood.

What’s interesting though, is that as of Sunday afternoon, a little less than 48 hours after Nexen accepted the bid, we don’t know which team actually placed it. Through various reports on Saturday, we can at least cut the possbilities n half.

Whoever the winner is will have a 30-day window to work out a contract. If an agreement is reached, Nexen will receive the full posting fee. If no big deal, no money changes hands and Kang remains in Korea.

Mystery aside, those look like reasonable salary expectations given how the bidding played out. If a team is willing to put up $5 million just to talk money, they should be comfortable offering a salary in that range.

As we noted recently though, there were some concerns about how Kang’s game will translate to MLB. In 116 games last season, he hit .354/.457/.733 to go along with 39 home runs and 115 RBIs. Eye-opening numbers, but it’s understood that the KBO is an offensive-friendly league. The competition will tighten up in MLB, especially once the scouting reports get around.

Joel Sherman of the New York Post also pointed out some questions about Kang’s defense. The concern is he will not be able to play shortstop up to MLB standards, forcing a shift to second base or third base, which Kang says would be his preference. How that’s sorted out will ultimately come down to the winning team’s needs.

According the Chris Cotillo of MLB Daily Dish, Philadelphia Philles and Washington Nationals are currently viewed as the favorites, but it’s truly a guess as to how this will play out.