You are here: Home / Basketball / Kings pull away from Lakers late, snap skid 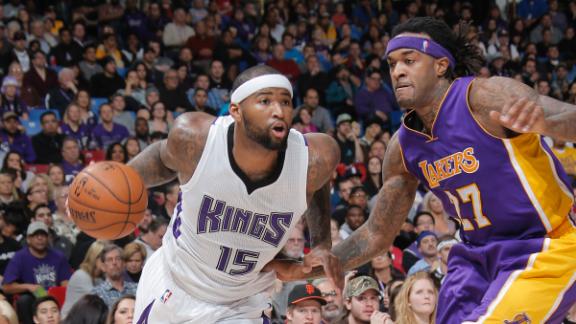 Cousins had 29 points and 14 rebounds in his second start since returning from a serious illness, and the Kings snapped a five-game losing streak with a 108-101 victory over the Los Angeles Lakers on Sunday.

“It seems like forever since we had a win,” Cousins said. “So it feels good to get a win.”

The victory provided a brief reprieve for Sacramento and its franchise centerpiece.

The Kings had lost 10 of 12 games — going 2-8 while Cousins recovered from viral meningitis — and fired coach Michael Malone last week. There also has been constant speculation about how long interim coach Tyrone Corbin will man the sidelines and reports of possible player trades.

For at least one day, though, Sacramento shook off all the talk — and a shaky first half — for a much-needed win. Rudy Gay scored 24 points, and Ben McLemore added 23 points and eight rebounds to help the Kings pull away late.

Sacramento improved to 10-7 with Cousins in the lineup.

“The guys are coming together,” said Corbin, who won for the first time in three games since Malone’s dismissal. “I can’t say enough about how much I respect the effort after all we’ve been through.”

Nick Young scored 26 points, and Bryant had 25 for the Lakers, who have lost six of eight and are buried at the bottom of the Pacific Division.

Bryant shot just 8-of-30 and had nine of the Lakers’ 17 turnovers. He also had five rebounds and three assists.

“Obviously, I have had tough moments,” Bryant said. “But the thing that I have always found effective is to focus on where you’re at in the moment and time.”

In what has been a down time for California’s once-proud NBA franchises, the Kings showed their rebuilding process might be further along than the Lakers’.

Cousins is still working his way back into shape but was as animated as ever, often talking between plays and overpowering defenders during them. He shot 9-of-19 and had three blocks, two assists and two steals.

But the Lakers still gave the Kings trouble most of the way.

Young started a four-point play while getting fouled by Gay near the top of the arc, lifting the Lakers to an 89-83 lead in the fourth that quickly evaporated. Gay followed with a 3-pointer, and Derrick Williams had a tying three-point play the next time down.

The teams traded baskets before Sacramento’s finishing burst put the game out of reach.

Cousins highlighted the decisive run when he came up with a defensive rebound and threw a bounce pass ahead to Darren Collison, who took a couple of dribbles before tossing a no-look alley-oop to McLemore that put the Kings up 99-91 with 4:02 remaining.

“I think we responded well,” Cousins said. “This is a way for us to move on from that situation and keep on the path we had been playing on this season.”

Kings: Former franchise center Vlade Divac sat next to Kings owner Vivek Ranadive near center court. … Gay thanked fans before the game for their support and wished them happy holidays.

Lakers coach Byron Scott said he might rest Bryant for an upcoming game to give the 36-year-old a break. Bryant said it might make sense but stopped short of endorsing the idea. “It’s probably not that much of an option, really,” he said. “I just have to look at the body, the amount of the workload, and see how it responds.”

Young avoided a suspension from the NBA after getting ejected in a loss to Oklahoma City on Friday night, when he retaliated to contact from Steven Adams with a forearm and elbow to the Thunder center’s throat. Scott said he spoke with Young about keeping his cool and told him he could face discipline from the coach — never mind the league — if there’s another incident.

Kings: At Golden State on Monday.