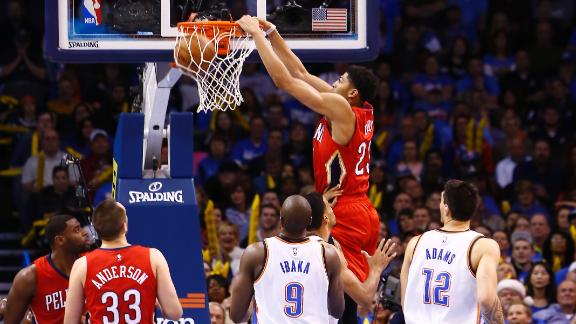 OKLAHOMA CITY — Anthony Davis scored 38 points to lead the New Orleans Pelicans to a 101-99 victory over the Oklahoma City Thunder on Sunday night.

It was the third-highest point total of Davis’ career. He made 16 of 22 shots and had 12 rebounds.

Jrue Holiday scored 11 points and matched a career high with 15 assists for the Pelicans.

Russell Westbrook scored 29 points for the Thunder, but he missed a 3-pointer that could have given Oklahoma City the lead in the closing seconds. Reggie Jackson added 19 points.

Oklahoma City forward Kevin Durant missed his second straight game because of a sprained right ankle. He was hurt Thursday against the Golden State Warriors when he stepped on Marreese Speights‘ foot. Thunder coach Scott Brooks said Durant is day-to-day.

With the score tied at 99, Holiday stole the ball from Westbrook, then found Davis for a breakaway dunk that put the Pelicans ahead with 2:58 to play.

With the Pelicans still up 101-99, Westbrook missed a 3-pointer and New Orleans rebounded. The Pelicans’ Tyreke Evans missed everything on a mid-range jumper, and New Orleans was called for a shot clock violation with 10 seconds remaining.

Westbrook started to drive to the hoop, then dribbled back out and took a 3-pointer that bounced off the front of the rim. The Thunder couldn’t get the rebound, and the Pelicans ran out the clock.

Davis scored 21 points in the first half on 9-for-14 shooting to help the Pelicans take a 53-48 lead. Westbrook countered with 14 points and five assists.

A steal by Andre Roberson led to a dunk by Westbrook that put the Thunder ahead 68-67 midway through the third quarter. Perry Jones scored 10 points in the third to help the Thunder take an 81-76 lead at the end of the period.

The Pelicans held the Thunder scoreless for the final 3:46.

Thunder: Durant missed the first 17 games of the season with a fractured bone in his right foot, and the Thunder went 5-12. Oklahoma City won seven of its first eight after his return. He is averaging 22.4 points, 5.0 rebounds and 3.6 assists. … Serge Ibaka was hit with a technical in the first quarter for arguing with an official about a call against him.

Pelicans: Davis, who leads the league with nearly three blocks per game, had three more. … The Pelicans forced the Thunder into nine turnovers in the first half and 16 for the game. … Starters other than Davis shot a combined 12 for 37 on the night.

Pelicans: Play at Indiana on Tuesday.