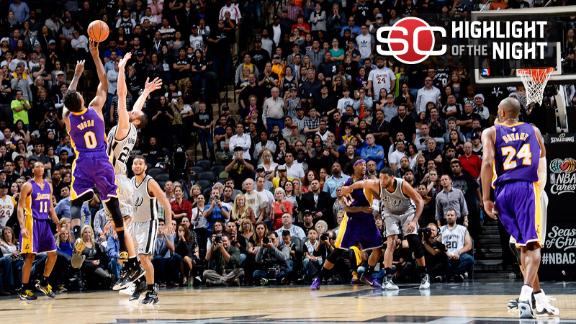 SAN ANTONIO — Kobe Bryant didn’t catch Michael Jordan, although he got a victory, thanks to Nick Young.

Young scored 29 points, including a go-ahead 3-pointer with 7.4 seconds left in overtime, Bryant had 22 and the Los Angeles Lakers overcame a shaky ending to beat the San Antonio Spurs 112-110 on Friday night.

After calling his teammates “soft” in a profanity-laced tirade Thursday following a scrimmage, Bryant was much happier with their efforts against the defending champions.

First Nick Young made an incredible game winner. Then he really got going in his postgame remarks, Baxter Holmes writes. Story

“Look, we can all criticize my style of leadership all day long,” Bryant said. “You can sit there, and it’s uncomfortable, it’s whatever, but I’ve been doing that since high school. We play this game to win championships, and I have five of them.

Tim Duncan had 19 points and 18 rebounds for San Antonio (16-7), which had its six-game home winning streak snapped in a performance Gregg Popovich called “pitiful.”

It might have been good enough without the player nicknamed “Swaggy P.”

“I’m so happy it ended up in my hands,” Young said. “I wanted to shoot that bad, especially being on the floor watching Kobe and playing for the Lakers; nothing like those types of shots.”

Young was 30 feet away with Manu Ginobili in his face and the shot clock about to expire.

“The last 3, Manu was everything but inside his jersey, and he had to adjust his shot in the air and kind of shoot around Manu’s hands, and it goes in,” Duncan said. “If you put a team in a situation like that, things like that can happen. We put the blame on ourselves for the 48, 50 minutes before it gets to that point.”

Bryant needed 30 points to tie Jordan for third place on the career scoring list but will have to wait until Sunday in Minnesota to possibly surpass the Hall of Famer.

Bryant’s final basket in regulation was a 3-pointer in front of Popovich as the shot clock sounded with 1:59 remaining, nodding his head in celebration as he trotted down the court with the Lakers ahead 101-92.

Kobe Bryant scored 22 points Friday and needs nine points to pass Michael Jordan for third on the all-time scoring list. His next chance will be Sunday in Minnesota. He has scored at least nine points in 98.9 percent of his games in the past 10 seasons. The last time he scored fewer than nine points in a game was Dec. 16, 2013, against the Hawks.

San Antonio scored eight points in a minute, capped by Danny Green‘s 3-pointer with 45 seconds left to cut Los Angeles’ lead to 101-100. Bryant missed his final two jumpers, and Ginobili made a free throw to tie the game with six seconds remaining. Duncan missed a turnaround jumper at the end of regulation.

Bryant missed his final five shots while going 7-of-22, giving up numerous shot opportunities in favor of firing passes to his teammates. He finished with nine assists, but many of his passes led to secondary feeds for baskets.

“He was doubled a lot, but I thought he played well,” Los Angeles coach Byron Scott said. “He didn’t shoot the ball particularly well, he had some great looks that he just missed, but I think in the second half, fourth quarter and overtime, a lot of that was due to fatigue. But you know, he’s a warrior, he’s going to try and gut it out, look for the open man or the open shot, and knock down those buckets.”

Jeremy Lin, Carlos Boozer and Jordan Hill each had 14 points for Los Angeles (7-16).

“I thought the Lakers did a great job,” Popovich said, leaving the postgame interview without taking any questions. “They had an edge, they were aggressive on both ends of the floor, they executed well and they definitely wanted the game more than we did. It seemed more important to them than to us. I thought our performance was pitiful.”

Lakers: Bryant received an enthusiastic thumbs-up from Popovich as the Lakers superstar took the court for the opening tipoff. … Bryant is tied with James Worthy for sixth on the Lakers’ career blocks list with 624.

Spurs: San Antonio lost for the second time this season when its bench scored at least 40 points. The team’s reserves eclipsed that mark for the 14th time by scoring 56 on Friday. … San Antonio has the best overall record since the 1997-98 season, going 966-402 for a .706 winning percentage. Despite their recent struggles, the Lakers are second during that span at .626 (855-511).

Duncan surpassed Hall of Famer Jerry West of the Lakers for 18th on the career scoring list and has 25,197 points. Asked about the milestone, Duncan quickly replied, “Not right now.”

Scott was asked about Young’s request to provide the assist when Bryant moved past Jordan.