You are here: Home / Basketball / Pelicans drop Cavs despite 41 from LeBron

Pelicans drop Cavs despite 41 from LeBron 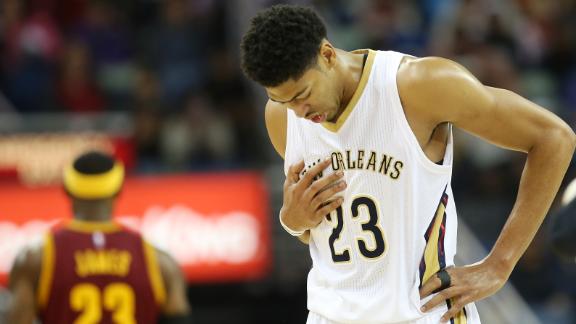 NEW ORLEANS — Tyreke Evans 31 points and 10 assists, Ryan Anderson tied a career high with eight 3-pointers on his way to 30 points, and the New Orleans Pelicans overcame the loss of Anthony Davis to beat LeBron James and the Cleveland Cavaliers, 119-114 on Friday night.

Davis left the game in the first quarter after taking an elbow to chest while jostling for position during a free throw by Kevin Love.

James, returning from a one-game absence because of a sore knee, scored 41 points, while Love added 21 points. Kyrie Irving played one night after hurting his left knee in a collision with Oklahoma City guard Russell Westbrook, but struggled early. He missed his first nine shots and did not score any of his 17 points until the fourth quarter, when Cleveland trailed by as many as 19 points.

On the verge of being blown out, the Cavs didn’t quit. They cut it to 106-99 with a 15-4 run that included 3-pointers by James, Irving and Joe Harris. With 3:44 still remaining, the Pelicans had to maintain their composure, and largely did. Evans made a short jumper and a layup, and his steal set up Jrue Holiday‘s 10-foot runner to back to 13.

Luke Babbitt responded with only his second field goal — also his second 3-pointer — and Cleveland could not recover from that.

Holiday finished with 16 points for New Orleans, which pulled back to .500 at 11-11. Omer Asik had 14 rebounds and nine points.

Anderson Varejao scored 11 points and Tristan Thompson grabbed 10 rebounds for Cleveland, which has lost two straight after having its eight-game winning streak snapped Thursday night in Oklahoma City, when James sat out.

Evans was 13 of 24 shooting, scoring mostly on powerful drives to the hoop for an array of floaters and reverse layups, but also hit two 3-pointers. He and Anderson dominated the second half, and Anderson’s final 3-pointer gave New Orleans its largest lead at 100-81 with 8:37 to go.

Cavaliers: James hit two 3-pointers to become the Cavaliers all-time leader in that category with 804, passing Mark Price, who had 802. … Dion Waiters, who played 10 minutes in the first half, was taken from the arena to a hospital after the first half to be examined for abdominal pain.