The College Football Playoff selection committee revealed its first four-team bracket on Sunday, seeding Alabama No. 1, Oregon No. 2, Florida State No. 3 and Ohio State No. 4. Two Big 12 teams, Baylor and Texas Christian, were left out as the fifth and sixth seeds.

Under the Football Bowl Subdivision’s new playoff system, the top-seeded team is placed in the semifinal bowl where it has more of a home-field advantage. So Alabama will play Ohio State in the Sugar Bowl in New Orleans, and Oregon will face Florida State in the Rose Bowl in Pasadena, Calif. Those games are on Jan. 1.

The winners will play for the national title on Jan. 12 at AT&T Stadium in Arlington, Tex. 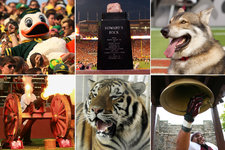 Interactive Feature | A Spotlight on the College Football SeasonAll season long The New York Times has been highlighting some of the well-known and not-so-well-known football traditions on campuses across the country. Now that the final College Football Playoff rankings have been released, setting the stage for the postseason, let’s take a look back at the regular season.

“With the championship game, Ohio State demonstrated that they were a total team,” Arkansas Athletic Director Jeff Long, the committee chairman, said in an interview on ESPN.

The Horned Frogs’ sole loss came at Baylor on Oct. 11 after the Bears staged a 24-point fourth-quarter comeback. On Sunday, Baylor was ranked one spot ahead of T.C.U.

Baylor did nearly all it could this season. In addition to beating T.C.U., the Bears defeated Oklahoma and Kansas State. Their only loss came at West Virginia. But that 41-27 defeat on Oct. 18 most likely did not hurt the Bears as much as their comparatively weak schedule did. Outside conference play, Baylor faced two lowly F.B.S. teams and a Football Championship Subdivision squad.

The committee also presumably felt that the Big 12 was not quite up to the standards of some of the other major conferences.

The rankings had the immediate effect of raising questions about the Big 12, the only major conference that does not stage a championship game. The Big 12 declared Baylor and T.C.U. co-champions even though Baylor won the teams’ head-to-head matchup.

Asked whether a Big 12 title game would have made a difference in the rankings, Long said, “We don’t deal in hypotheticals.” But he seemed to suggest that Ohio State’s success in its conference’s championship game had helped the Buckeyes qualify above Baylor and T.C.U.

“Ohio State’s performance in a 13th game gave them a quality win against a highly ranked team,” Long said.

T.C.U.’s drop from third to sixth despite a blowout win, he added, “was really about Ohio State and not about T.C.U.”

Under an N.C.A.A. rule, a conference cannot hold a championship game unless it has at least 12 teams. The Big 12, despite its name, has just 10. It has considered petitioning the N.C.A.A. to change the rule.

The Big 12 had another problem. The conference recently introduced the motto “One True Champion” to emphasize that its teams played all the other conference teams during the regular season.

“We’re always going to apply a tiebreaker to determine who our champion is,” Commissioner Bob Bowlsby said before the season. He added, “We always are going to get to the point of a true champion.”

Yet the Big 12 decided to consider T.C.U. and Baylor co-champions rather than use tiebreakers — the first of which would have probably been head-to-head competition, making Baylor the champion.

“We were faced with co-champions,” Long said. “That’s what was given to us by the conference, and we weighed that.”

On Saturday night, some saw the problem coming.

“What country do we live in? America?” Art Briles, Baylor’s coach, said during a postgame interview on ESPN on Saturday. “If you and I race, and you beat me, you’re faster than me. We play on a football field, we play a football game on the field, we win, then we’re the better team.”

Ohio State’s only loss came to Virginia Tech in Week 2 as quarterback J. T. Barrett was adjusting to being the starter, having replaced Braxton Miller, who sustained a season-ending right shoulder injury in late August. The Buckeyes went on to dominate the Big Ten, with road wins over Michigan State and Minnesota and the blowout of Wisconsin on Saturday night in Indianapolis for the conference title.

Saturday’s victory was led by the third-string quarterback Cardale Jones, after Barrett went down with a season-ending injury Nov. 29.

“I’ve been around teams that have competed and won national championships,” Ohio State Coach Urban Meyer, who won two Bowl Championship Series titles with Florida, said after Saturday’s game. “This team, the way it’s playing right now, is one of the top teams in America.”

Later Sunday afternoon, the committee released the rest of its top 25, as well as the matchups in the other four playoff-affiliated bowls. Baylor will play No. 8 Michigan State in the Cotton Bowl in Arlington, a couple of hours north of Baylor’s campus, on Jan. 1. T.C.U. will travel to Atlanta to play No. 9 Mississippi in the Peach Bowl on Dec. 31.

No. 7 Mississippi State, as the top-ranked nonplayoff team among the Big Ten, the Southeastern Conference and Notre Dame, will play No. 12 Georgia Tech, the highest-ranked nonplayoff A.C.C. team, in the Orange Bowl, which is a contract bowl, on Dec. 31.

And — appropriately, given its reputation as a major-conference gate-crasher — No. 20 Boise State, which beat Fresno State on Saturday night to win the Mountain West, secured the berth promised to the highest-ranked conference champion outside the five major conferences. The Broncos will play No. 10 Arizona in the Fiesta Bowl on Dec. 31.